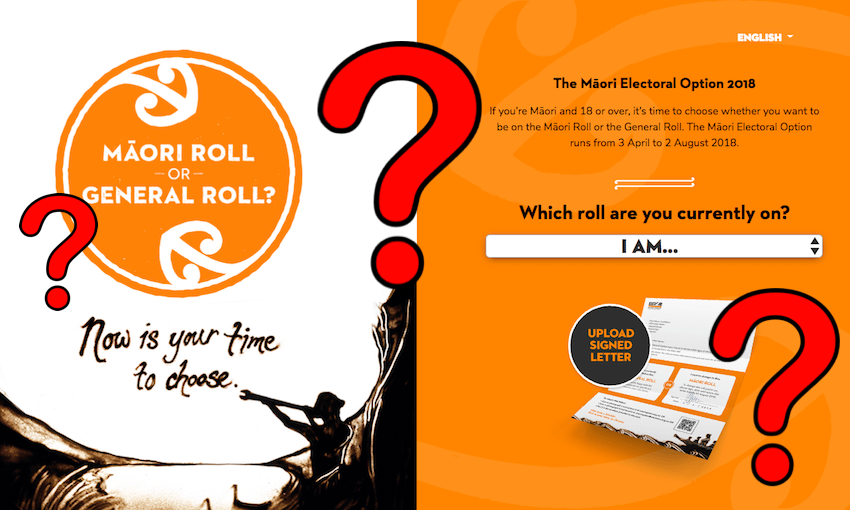 Spinoff cheat sheet: For four months from 3 April, Māori can choose whether they want to be on the Māori electoral roll or the general electoral roll. It’s an important decision that could influence the next election and the shape of our parliament.

Since 1975, Māori in New Zealand have been able to decide if they want to be part of the Māori electoral roll or the general electoral roll for general elections (like the one we had at the end of last year). After every census, the option crops up.

Wait, what’s the difference between the Māori and general rolls again?

We get two ticks under MMP – one for an electoral candidate and one for a party.

Your choice doesn’t affect which parties you can vote for with your party vote.

But I already decided which roll to be part of when I first enrolled.

You have to decide again. Stop being such a cry baby.

Why can’t I just do it before the next election?

You can only change rolls during the option. The results are used to decide how many Māori seats we need, so just before the election would be waaay too late to figure that out.

What happens if everyone chooses to go on the general roll?

Then our Māori seats will be abolished and Don Brash will have won.

I don’t know how to decide. What are the benefits of either option?

As with all politics, it’s an entirely personal decision.

Just help me out a bit.

There is more Māori representation in our parliament than ever and for this reason some people think the Māori seats have outlived their purpose.

Out of 120 seats in parliament, 29 of those are filled by members of Māori descent. Without the seven Māori electorate MPs, 18% of our MPs would still be Māori (Aotearoa has a population of about 15% Māori).

The difference between a general electorate or list MP that identifies as Māori, and a Māori electorate MP might seem minimal but there is the impression, at least, that the Māori seats hold their MPs to a higher account to act in accordance with tikanga and other principles of te ao Māori, like whakawhanaungatanga, manaakitanga and kanohi kitea. Many of our Māori electorate MPs also come from historically important political families, and have been raised and educated to become leaders for their people.

Why should I take your word for it?

You shouldn’t. Discuss it with friends and whānau, read about the history of the seats at your local library or online, contact the Electoral Commission or write letters to your local MPs if you have questions about their roles. You can find a full list of MPs here.

It is true that you can’t vote for the Māori Party unless you are enrolled in a Māori electorate?

No, Mr Hosking, no. A thousand times, no.

All right, what do I do next then?

You need to be over 18, a New Zealand citizen or permanent resident, and have Māori heritage (don’t worry, you won’t be asked to prove this).

If you want to stay on the roll you’re currently on, you can do nothing at all!

If you want to change, go to maorioption.org.nz and follow the instructions.