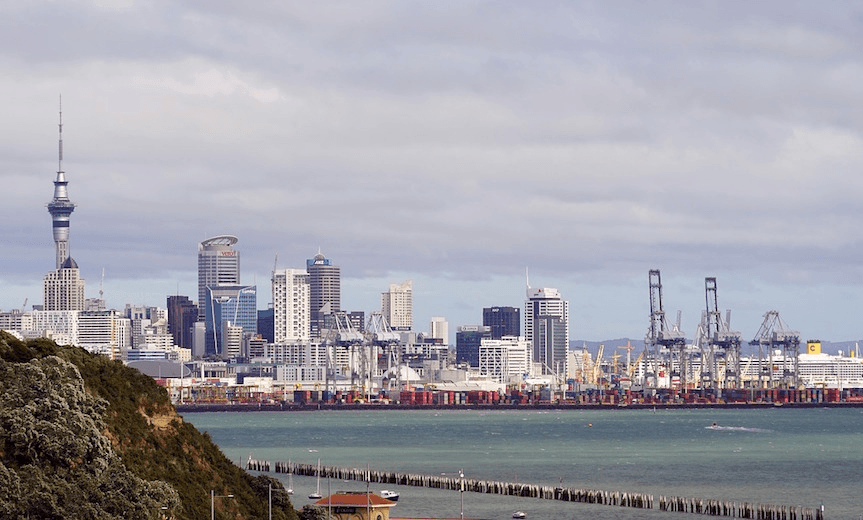 The storm in the port: Why it’s time to get moving

It made good sense to develop the port in its current location on the Waitemata Harbour. But, says Urban Auckland’s Julie Stout, it doesn’t make sense to keep the container and mixed-goods operations there now. So what happened to the consensus agreement to find a new location?

Read other contributions to this debate here.

Ports of Auckland’s core business is shifting cargo. It occupies 77 hectares of prime waterfront land – all of which has been reclaimed from our beautiful Waitemata Harbour over the past 150 years. It pays no rent for this manufactured land, and therefore has an artificially low cost base that allows it to operate profitably.

The port has played an important role in Auckland’s development and for many years its close proximity to the CBD was advantageous. But this is no longer the case. The harbour has been increasingly constricted and our connection to the city-centre waterfront is blocked. The noise and pollution from an industrial estate in the middle of our fast-growing city, and the problem of shifting all of Auckland’s freight through residential suburbs and increasingly congested transport corridors, are serious problems with no easy solutions. It is time to think strategically about the future.

Ports of Auckland are very good at reporting their own efficiency but the efficiency of the port actually has little relevance to this discussion. The issues are more profound. Is a rapidly expanding central city the right place for an industrial business with strong growth aspirations? Do the people of Auckland believe a subsidised industrial estate is the best use of their waterfront? Does sea freight needs to arrive and depart in the CBD? Is there a more efficient solution for the future?

The Port Future Study was initiated by Auckland Council after the public furore caused by Ports of Auckland’s proposed expansion of Bledisloe Wharf. The Port Future Study was overseen by a Consensus Working Group incorporating representatives from business, iwi, the community and Ports of Auckland itself. It was charged to investigate the implications of the port’s growth, not just from an economic viewpoint, but also from environmental, cultural and social viewpoints.

The study lasted nine months, cost $1 million and was carried out independently by EY. Stage 1 of the work was reported in the middle of last year.

The number one recommendation by EY and the Consensus Working Group overseeing the report was that Stage 2 of the Ports Future Study be done to establish a future port relocation option.

While there is broad agreement that the cruise ships are best to remain based in the city centre, the best location of a new port is more contentious. The Port Future Study identified two broad options within the Auckland region:

Taking a long-term view with a broad range of criteria including freight growth, city growth and economic, environmental, social and cultural issues, both of these options scored better than the development of Ports of Auckland on its present site. The analysis also took account of capacities at Northport and Tauranga.

Any option we consider will have issues, but we need to confront them head on and for once make decisions that future generations will thank us for. San Francisco has successfully developed a new port within a bird sanctuary. How did they do that? If Manukau is the right place for a new port, should we be investing in heavy rail to the airport rather than the current light rail?

The point is that these alternative location options provide a useful starting point for discussion, but the next stage of the study must look beyond council boundaries to find the solution that will meet the sea freight needs of Auckland and the upper North Island over the next 100 years and beyond.

For now at least, let’s investigate the options and work through the economic, environmental, cultural and social issues. Let’s do it with solid research and consultation, not asserted opinions based on the past. The options need to be investigated now before other land-based development closes them off. This is too big an issue to ignore.

Both Mayor Phil Goff and Councillor Chris Darby, who chairs the council’s planning committee, recognised this in their election promises to “sort the port”. So let’s do it now and study the Manukau and Firth options before long-term alternatives are foreclosed by bad short-term decisions.

And just imagine the incredible social and economic transformation that would occur in Auckland over the next generations if we replaced a subsidised 77-hectare industrial estate with a city-defining waterfront.

Read other contributions to this debate here.

Julie Stout of Urban Auckland is an architect and was a member of the Consensus Working Group for the Ports Future Study.