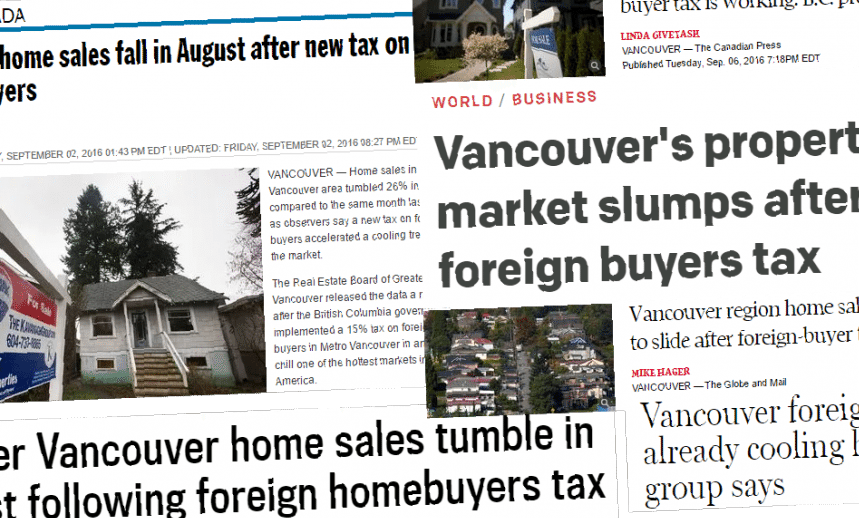 Vancouver’s foreign-buyer tax: the solution for an overheated Auckland market?

Did the Canadian experiment work? It is far too early to tell, and anybody claiming otherwise may be trying to sell you something, writes Eric Crampton

But even if building houses were impossible, prices wouldn’t be rising if demand weren’t increasing. Housing in Detroit is becoming rather cheap as people flee the place; rules banning new building there would not really cause a housing affordability crisis.

If you followed reporting on it in New Zealand, you could be forgiven for having reckoned that Vancouver’s tax on foreign buyers has solved its housing affordability problem. Vancouver implemented a tax on foreign buyers in August; sales then dropped 23%. And some realtors report substantial drops in what they viewed as speculative demand – less heat at auctions, and fewer rushed purchases.

Does that mean the tax worked? It is far too early to tell, and anybody claiming otherwise may be trying to sell you something.

So what’s going on?

Vancouver’s tax on foreign residents seems to have come in when the Vancouver property market was already weakening. Further, in anticipation of the tax coming in, University of Victoria (British Columbia, not Wellington) economist Professor Lindsay Tedds argues some purchases that would have happened in August were brought forward to July – the numbers then make August look artificially weaker than it was, and July artificially stronger.

At the same time, the market has also been affected by nobody quite knowing what the tax would involve in the many complicated cases that come up. Communication around the policy was poor. Vancouver realtor Keith Roy notes that nobody knew to whom the tax would apply. In reality, the tax applies to buyers who are neither citizens nor permanent residents, but confusion about its application would delay a few sales.

And there will still be interesting complicated cases. Suppose Dad runs a factory in China and provides the funds to buy the house for the rest of the family, who are Vancouver-based and who achieved permanent residence. Professor Tedds warns that much of the intention of the tax might be circumvented in this way: plenty of foreign buyers will have local relatives able to make the purchase on their behalf, and figuring out how to apply the intention of the legislation could be interesting.

How much of August’s decline reflects the already declining market, the temporary shift in sales from the tax’s coming in, and some settling in of some certainty of who pays the tax and who doesn’t (and how to route around it) – it’s anybody’s guess. The longer term effects will take a fair bit of time to sort out.

But there are a few things that make me wonder.

First off, suppose you think that housing is all messed up because foreign buyers are snapping up houses in Auckland or Vancouver and leaving them empty because they’re just looking for safe places to park potentially dodgy money. Well, it doesn’t seem hard to rent out a downtown Vancouver apartment for $2,500 per month or more. If someone is willing to throw away $30,000 per year in rent – the present value of which over a decade is close to a quarter of a million dollars – is it really that likely that a 15% tax would be that much of a deterrent?

Second, if those imagined rich foreign buyers are just looking for safe places to stash money and don’t care about living in the house or renting it out, what makes Vancouver, or Seattle, or Sydney, so special? What’s wrong with Christchurch or Toronto or Invercargill? Isn’t buying a house in a place that’s at the top of the market less safe than buying one where the market is less overheated?

And, Professor Tedds also warns of a few other side effects of the tax. Because it applies to all foreign buyers, companies hiring in expertise from abroad would have a tougher time attracting them to Vancouver. Vancouver’s a beautiful place, like Auckland, but it can be tough to attract people to very expensive places.

I’d be a bit surprised if a tax on foreign buyers were really the right solution.

Why not just ease up on zoning restrictions and restrictions on overseas investments so that foreign money can pour into building new subdivisions, terraced housing and apartments?

The Independent Hearings Panel did make the Auckland Unitary Plan better, but I wouldn’t envy a foreign investor trying to figure out how to buy 20 hectares adjacent to a reserve to put in a new subdivision – and especially if there’s a stroppy residents’ association anywhere within 10 kilometres.

I hope that New Zealand doesn’t rush to follow Vancouver’s example on a single month’s worth of data, but I fear that “something must be done” politics could make it too tempting here too.

When I suggested that there was a chance New Zealand might, Professor Tedds was aghast: “Oh God no, please no. Do not follow our lead.”

It may pay not to be too hasty on this one.