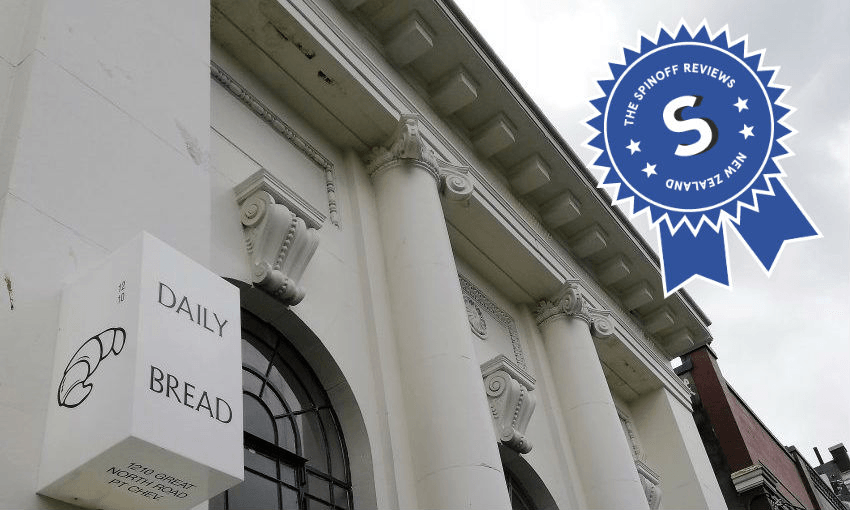 We review the entire country and culture of New Zealand, one thing at a time. Today, does the celebrated new bakery from the Orphan’s Kitchen team live up to the Instagram hype?

The good burghers of Point Chevalier have been spoiled over the last couple of years. Excellent cafes like Twisted Tomato, the Beach Cafe and Spilt Milk. An excellent cakery. An excellent Afghan restaurant. An excellent foodstore. Even a toilet-installing prime minister. The latest blessing for Auckland’s seaside suburban nirvana is Daily Bread, a bakery cafe in the handsome neoclassical building vacated last year by ASB.

The bakery itself takes up most of the refurbished old bank (the safe is a walk-in chiller), where a bevy of bakers and new and vintage machinery is knocking out sourdough loaves, buns, pretzels and the rest, all at such a pace that you’re unlikely to order anything that isn’t still warm. There’s also a load of deli stuff, pies, salads, breakfasts, donuts (amazing donuts), Supreme coffee. The kumara sourdough is a giant among loaves. The Reuben sandwich is crunchy, melty, sauerkrauty goodness. When asked if the homemade nutella-ish goop on spelt was as yummy as it looked the Spinoff Board of Review’s four year old consultant ruled, “actually it’s yummier than it looks.”

It’s pretty much invariably delicious. You can find the place by the trail of drool.

The building might be old (80-something, I think) but it is a baby compared with the sourdough starter that Patrick Welzenbach is using for fermentation. Handed down the generations in his native Germany, it is reputedly more than 600 years old.

Welzenbach, named NZ’s best baker last year, has alongside Orphan’s Kitchen proprietors Josh Helm and Tom Hishon created a doughy heaven, flanked by two of Auckland’s great rivers, Great North Road and the Northwestern Motorway. What was once a drive way beside the bank is now a seating area with eight big picnic tables, covered by a canopy (not sure how that will work in the rain). They were packed just about all weekend, while the queue ran out the door, so if you want to sit down for a sandwich or posh toast or a curried kumara pie, best to try earlyish on a weekday.

Verdict: Look, it clearly risks blasphemy and fiery wrath to pun on the Lord’s Prayer in your bakery brand, but He surely wouldn’t mind having His name taken in grain when it’s this delicious and they’re also doing godly things with compost.