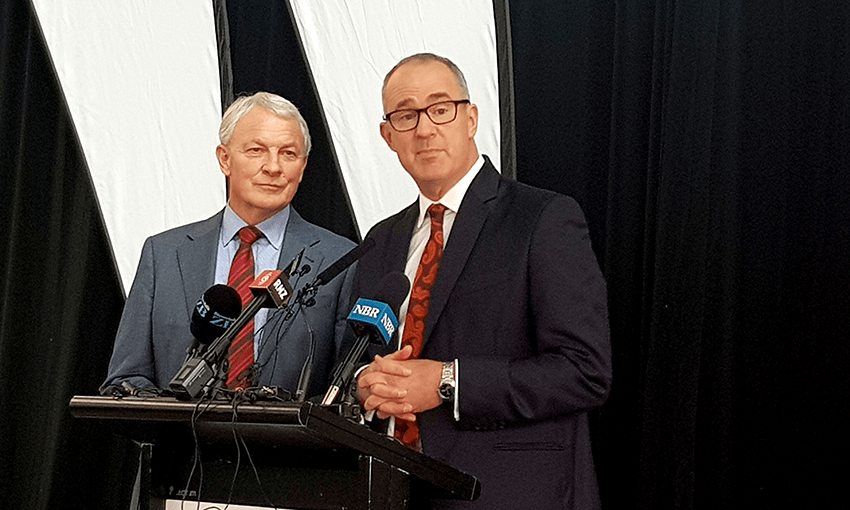 Something has to change: politicians pledge $30b to save Auckland commuters

This morning the government and Auckland Council announced a record $30b investment in solving Auckland’s transport crisis. Don Rowe reports.

Atop a broken escalator the two Phils stood shoulder to shoulder, sharing a vision of a better Auckland, a cleaner Auckland; a Greater Auckland, if you will.

The Government and Auckland Council together will embark on New Zealand’s largest ever civil construction programme, they announced, investing $28 billion over 10 years to ‘unlock Auckland’s potential.’

“No global city can cope by simply building roads,” said Phil Goff. “We have to do much more than that.”

The assorted press hacks murmured assent. The Spinoff’s former Auckland editor Simon Wilson was there, meticulously prepared, an encyclopaedia of transport. He nodded his head. The pair had shared war stories moments earlier (Wilson is recovering from cancer treatment), with Goff announcing he had in fact chosen to have wires inserted in his arm rather than groin following a recent health scare.

“The motorway is lovely to drive on,” said Phil Twyford. “In the middle of the night.”

A few scattered chuckles. I noted the Herald’s Bernard Orsman resplendent in blue Pumas, and a LED sign in the distance welcoming the prime minister, who wasn’t there.

“This city is slowly grinding to a halt,” Twyford continued. “Auckland is losing $1.3 billion a year in productivity. Something has to change in Auckland”

Here are what the ATAP major investments include: https://t.co/lYX9Wsm6SO pic.twitter.com/uuU6ZqruHt

Funded in part through the Auckland fuel tax, the National Land Transport Fund and crown partner contributions, ATAP codifies and sets into motion the various roading, cycleway and rail projects ruminated over by Labour in their nine years in opposition.

The Sky Path for walking and cycling across the bridge, the Sea Path going further onwards to Takapuna, $900 million in safety programmes, wide-ranging rail network upgrades, bus priority programmes, heavy investment in light rail – this is the plan that will, in Goff’s words, “deal with the immediate and transform for the future”.

But what of the allegations from the National Party that this is a government determined to take money from the regions and give it to Auckland?

“National have no credibility on transport,” said Twyford. “We inherited a $9.7 billion fiscal hole, and we closed it.”

Auckland will receive 38% of the National Land Transport Fund over the next decade, a figure Goff says is proportionate with the region’s growing population, but still less than the projected 55% share of the country’s population growth over the next ten years.

“Funding transport through rates was inequitable,” he said.

“Auckland has to contribute its share and the regional fuel tax allows us to do that. The more than $4 billion expenditure it unlocks is critically important to progressing a better transport system for Auckland.”

The controversial Penlink, a road connecting the Whangaparaoa Peninsula with State Highway One, will receive $200 million, with the balance of the project being funded through PPPs and a toll, something Scoop’s Gordon Campbell finds alarming and contradictory with the government’s stance on PPPs to fund other forms of infrastructure.

“ATAP represents a significant increase in investment in our transport network, but we still need to find innovative ways to fund further development such as PPPs, special purpose vehicles or infrastructure bonds,” Goff said.

ATAP also includes $1.8 billion in funding for light rail, with additional monies for committed projects like the City Rail Link.

No word yet on whether or not that will include educational resources for those of us, like myself, who missed three trains following the press conference. Like they say, you can build trains but you can’t fix stupid.