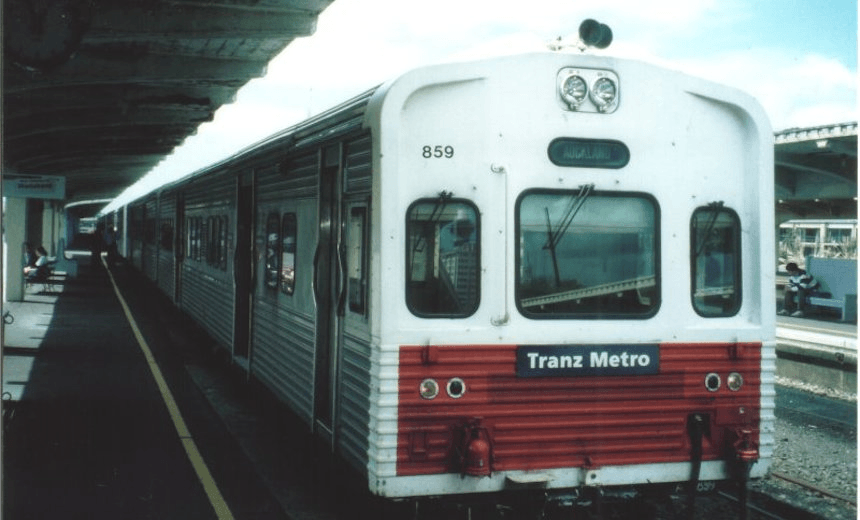 Auckland’s rail services are now carrying 20 million people a year. That’s double the number just four years ago and we’ve reached the milestone three years faster than the planners expected. Matt Lowrie of Greater Auckland looks back at how the city’s commuter train travel was saved from extinction.

This story was first published in April 2014, on the eve of the official launch of electrified rail in Auckland.

Next Monday will be a historic day for transport in Auckland: for the first time the city will have electric trains carrying fare-paying passengers. Electrifying the rail network is something that has been talked about for 90 years, mostly in conjunction with a version of the City Rail Link. While Britomart was undoubtedly a turning point for rail in Auckland, it wouldn’t have been possible without some key events (and a whole pile of luck) just over a decade earlier, without which it is unlikely we would have a rail system today. One man was at the centre of it all. This is the story of how he saved rail in Auckland.

The story starts in the late ’80s, when the Auckland rail network was in serious decline. The trains were being run under the name of City Line which was part of NZ Rail Ltd; the company also ran a number of bus services.

Unlike Wellington, which had fairly new electric trains, the trains running on the Auckland network were decrepit and consisted of former long distance carriages that had been converted for suburban use. They were originally built in 1936; their frames were steel but the bodies were made from wood. They were also hard to access, requiring customers to climb up into the trains from what were basically oversized kerbs masquerading as station platforms. The video below shows what these trains looked like and there are more linked to here. Also note: to change ends there was no driving cab like today. Instead the locomotive had to be uncoupled and moved to the other end of the train at a station with a passing loop.

At the time Auckland had seen numerous grand plans for new public transport networks but none ever had the political support needed to actually implement them. At the time the latest idea was converting the Western Line to light rail using a tram train from Henderson, then sending it via a tunnel under K Rd before running down the surface of Queen St. The problem was the idea couldn’t get political support. The city council didn’t want trams on Queen St and the regional council saw it as competition to the Yellow Bus Company of which they owned 90%. That left Auckland with its near-derelict trains and not much hope for the future.

By now, it was the early 90s. Enter Raymond Siddalls. With a year to go before the regional council took over the contracting of services, he was in charge running the suburban fleet. His bosses had also tasked him with shutting down the Auckland network. With an aging fleet, falling patronage and little political support either locally or nationally, no one thought it could be made to work. But upon looking at the operations Raymond was surprised to find that with a restructure he could cut costs enough to have the company start making a profit on the gross contracts it held.

The critical time came in 1991, when a decision needed to be made on how to move forward. New legislation controlling how public transport services would operate was coming into effect. This changed everything. No longer could public transport be treated as a social service; the focus was on making public transport stand up commercially. The legislation also didn’t allow for any distinction between rail and bus services which meant bus companies could tender for rail routes. This legislation is still in effect today and has had a significant negative effect on the planning and provision of public transport for over two decades. The new PTOM (Public Transport Operating Model) legislation should address most (but not all) of the issues it caused.

With the network actually making a profit the operation was kept going, and the operating company tendered for the 120 services a day that they were already running (today there are something like 365 services per day). One problem was that each service had to take on the full cost of running the network. The operating company was subsequently able to re-tender for the services as a combined timetable which allowed the costs to be shared across all services.

The council started to get on board and the company was awarded the contract in South Auckland for three years while in the West it was for four years. They were then able to successfully argue that with a four year contract on the entire network there was a chance to look at new rolling stock which would boost and the councils agreed to this. The contract was due to start in June 1992.

Around this time one of Raymond’s staff members went to Perth for a wedding. Perth was just about to finish electrifying their rail network and so the staffer was asked to find out what they were planning to do with their unneeded DMUs (Diesel Multiple Units – the ones that don’t have a locomotive).

It turns out there were no plans for them so Raymond flew over to inspect and value the trains. Realising that no other buyers were interested, he put in an offer for them at scrap value. He aimed to buy 20 trains; he managed to secure 19 of them.

Despite a new fleet of trains seemingly secured, it wasn’t the end of the problems. Perth is flat and the steepest track has a grade of 1:200. Auckland is far from flat – trains here need to be able to handle grades of 1:36. This meant many needed their engines and transmissions overhauled to be able to handle the Auckland conditions. Then the trains needed to be refurbished by re-upholstering the seats and replacing the floor coverings. Lastly platform heights around the network had to be raised so that people could actually get on to the trains. To make things even more difficult in Auckland the rail unions were striking trying to reopen the workshops and re-employ some of the staff who had been laid off by the earlier rail restructuring.

But how to fund all this? The only way they could make it viable would be to extend the rail contract to 10 years. Due to the confirmed availability of rolling stock this was considered a good deal. As such the regional council ended up voting unanimously to support the proposal with one person abstaining – the abstention was from a light rail advocate.

In another stroke of luck all this happened just before the rail network was privatised, something that could have put the whole plan in jeopardy.

At around the time the DMUs were introduced patronage on the rail network reached its lowest point ever, just over 1 million trips per year. Within a couple of years of their introduction, the DMUs were responsible for a reverse in patronage decline. It then continued to grow, reaching about 2.5 million trips by the time Britomart was opened. It was that growth that helped give the political courage needed to get Britomart built.

Speaking of Britomart, it was Raymond Siddalls who first proposed the idea of a Britomart train station all the way back in 1990. He was also instrumental in ensuring that a corridor was left to the site of Britomart as the initial plan had been to sell off the old rail yard land entirely.

Put simply, without Raymond Siddalls we almost certainly would not have a rail network today that is about to be served by modern electric trains. He has been a hero to public transport in Auckland, and one I think the city should be eternally thankful for. Cheers Raymond.

Thanks to Raymond for agreeing to share his memories with us. Also thanks to Auckland Transport (where Raymond currently works) for allowing us to talk to him.

This post was first published on the Auckland transport and urban planning blog Greater Auckland.