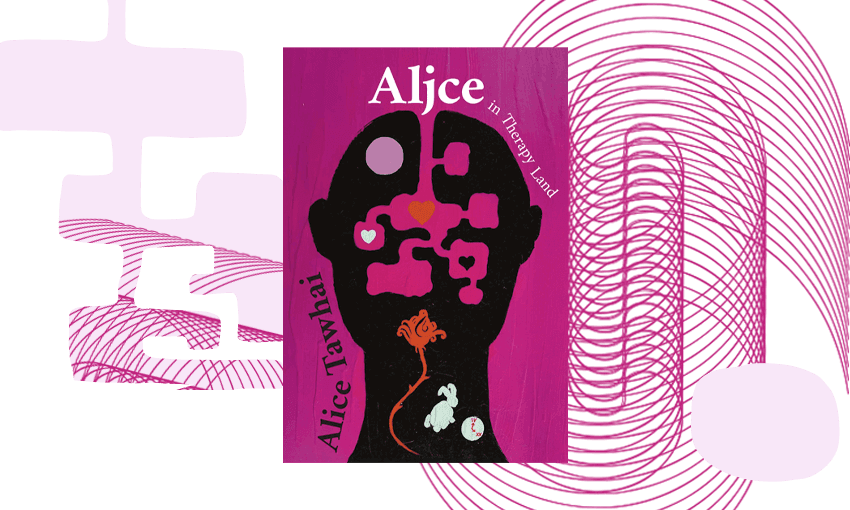 Aljce in Therapy Land: Down the rabbithole and into a NZ office hellscape

By Rebecca K Reilly
Guest writer
Made possible by

Unless you are very lucky, probably sometime in your life you will have the experience of having a terrible job. In a way, all jobs are terrible because it would be much nicer not to have to exchange labour for capital, and instead go about our lives enjoying ourselves and never emailing at all. But some jobs are definitely worse than others. Some jobs are judging cakes on a TV show about baking or being a background actor in a popular stage musical, and some are not this at all, but rather sitting in a dull room with nothing to do and then being told you’re doing it wrong. It’s this sort of terrible job which we see depicted in excruciating detail with Aljce’s new role at the Therapy Hub in Aljce in Therapy Land.

There are many depictions of women at work across New Zealand literature and they mostly don’t seem to be having a very good time. This makes sense as the pay gap is still 9.1% as of 2021 and work in women-dominated industries, particularly care-work and midwifery, is massively undervalued. In ‘Living the Dream’, a short story in 2021’s Acorn Foundation prize-winning Bug Week, we see a young student teacher presenting a lesson for assessment while her older male associate imagines having sex with her. In Emily Perkin’s Not Her Real Name we get a young office worker unspectacularly sleeping with her boss during a conference. In Everything We Hoped For, Pip Adam writes of a woman who’s somehow deleted a whole database and is spending the whole duration of a staff party on the phone trying to fix it, still in costume. The jobs these women, and Aljce, have, are all different but in a way all the same, as Aljce says: “All jobs seem very different at first, she told herself. Until you get used to them.”

Aljce in Therapy Land begins on Aljce’s first day of her new placement, where she needs to accrue 500 hours of client contact time to receive her post-graduate counselling qualification. Already in the first few pages, although Aljce seems optimistic about the new workplace, something seems off with the Therapy Hub, supposedly a one-stop shop for all counselling needs, especially when the manager Jillq refuses to fill out the form Aljce needs for her accreditation, telling her she doesn’t believe she’s ready to see clients. This is the first red flag from Jillq of about four hundred throughout the book. She’s the manager, the owner and sits on the board of the Therapy Hub. Her qualifications are dubious at best. She plays favourites with her employees and is the epitome of a toxic workplace bully.

The bulk of the book’s plot revolves around Aljce’s run-ins with Jillq, constantly being called to her office to be told what her latest wrongdoing is, how she isn’t cut out for being a counsellor because of her hard, unlikeable personality and twice Aljce is given a written warning for bullying (over one incident where she made a joke with an external visitor, which he was not offended by). At one point, Jillq springs a meeting on Aljce where the staff of the Therapy Hub gather in a circle and go around telling Aljce why they don’t like her. She’s criticised for her clothing, her attitude, is told that she isn’t following procedures that seem to have been made up to catch her out and is blamed for incidents that couldn’t possibly have anything to do with her. No one in the Hub stands up for her and everyone she speaks to in the wider industry says they want to stay out of it. Naturally, Aljce wants to quit but she can’t, as she doubts that she will be able to find another position where she’ll be able to complete her 500 hours and she needs the money because she’s a single mother and has a mortgage to pay (somehow).

Interestingly for a novel where the protagonist is a single mother, we hear very little about Aljce’s relationship with her children, Pleasance and Liddell. The book strongly makes the point that Aljce’s job and Jillq’s toxic hold over her have totally taken over her life to the point where there simply isn’t room to be thinking about anything else. The narration is in a close third-person and predominantly alternates between describing conflict at the Therapy Hub and Aljce’s reflection on it and herself, interspersed with conversations with friends, usually while stoned, and other people external to the Hub which primarily serve to reinforce these ideas. Aljce wants to believe that she’s a good, although misunderstood, person but obviously she begins to falter in this opinion after being constantly dragged down by Jillq, as well as a man she meets online who cuts contact with her after seeing what she looks like.

We don’t find out anything about Aljce’s life before the Hub, what her previous relationships have been like, about her family, the father of her children, what she did before she wanted to become a counsellor – this plot is solely focussed on the conflict that is currently occurring. This gives Aljce in Therapy Land quite a different feeling from a novel like Victory Park by Rachel Kerr, which has a similar domestic setting and context, but is sort of the inverse as a story that shows how women can end up alone and in low-paid care and service work and whether it’s possible to progress once you’ve ended up in that place. The laser-focus of Aljce in Therapy Land on conflict and the way the tension remains at a consistent level throughout the text, work to make the reader feel as if there really is no escape for Aljce, there is no life outside of where she is, and she is trapped in a Kafka’s Before the Law situation.

The book’s title is no accident either, there are strong references and allusions to Alice in Wonderland throughout. It’s heavily inspired by Lewis Carroll’s work enough to verge into loose adaptation territory, I would go out on a limb and say. Jillq is the Queen of Hearts with her mass of red curls, tyrannical attitude and swathe of obliging subordinates, particularly Mrs Kingi. Aljce is Alice, falling asleep at inopportune times, not being able to find her way out of the Hub, a friend of a “Mad Neighbour” with a steady drug supply. There are white rabbits hopping around a cabbage patch outside the Hub and Jillq angrily leads everyone on a hunt to seal up the rabbit-hole. All the clocks are different. There’s a pink iced cupcake in the staffroom with a bite out of it. All the chapter titles are Wonderland quotes.

The novel is not shying away from its parallels, it’s leaning into them, hard.

What this results in is a story world that allows things to slip over the line of being an achingly real bureaucratic hellscape and into a new territory where things really don’t make sense and it’s okay. Whether everyone’s been forced outside to collect golf balls in the rain (staff members at the Hub frequently putt golf balls from their offices), or a tree is suddenly on fire outside after being hit by lightning, it all seems to make sense. This also makes some of the more unrelenting aspects to the situation at the Hub more palatable to the reader as well – the fact that no one ever sides with Aljce or speaks negatively about Jillq, that every time Aljce thinks she’s found an ally they instantly disappear, everything seems to be a dead end. This can be frustrating, but at the same time the book is telling you that nothing should be expected to come together in a conventional way and the Hub is its own vortex with its own logic. This is complemented by the way Aljce thinks and speaks about colour – she has synaesthesia and notices the colour in everything, her colleague Hattie’s hair which goes from bright blue to silvery ringlets and as red as Jillq’s herself, the pink glow of the sky and the glowstick her child sees differently, and the different shades of poppies in her neighbour’s garden, bringing the surreal world of the Hub and Aljce’s reflective interiority together.

This is a book that takes risks, is experimental with pacing, uses a lot of expository dialogue and frequently slips between reality and fantasy. Although the tense themes and fairly repetitive plot may not appeal to all readers, anyone who’s been employed in a toxic workplace or had a horrible boss will find this relatable and we’re lucky that Lawrence & Gibson has created space in the New Zealand literary market for less conventional novels. As Aljce says: “The trick, I think, would be to write a book where it could be seen from different perspectives at different times, different layers, and the reader never really being sure of which layers were true, or which angle to view it from.”