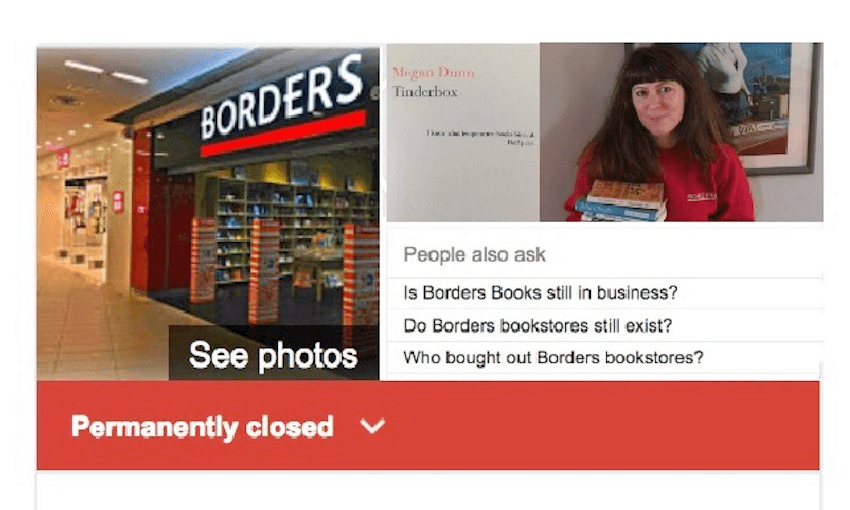 By Megan Dunn
Guest writer
Made possible by

An excerpt from Tinderbox, the new memoir by Wellington writer Megan Dunn.

One night shift at Borders Islington the alarm on the ground floor went off just after 8pm and a bum stumbled out of the fire doors in a brown corduroy suit.

“What were you doing?” I asked. “That area is for staff only.”

“I need the bathroom.” His eyes spiralled around the store. He was shit faced. I could have lit his breathe with a match.

“The toilets are over there.” I pointed at the large prominent sign nearby.

He shambled off towards it. I shook my head.

Time stilled on the night shift.

Downstairs in the staff room, I waited for my ready meal to heat. The plate span around inside the microwave drawn by its centrifugal pull.

I poked at my teabag with a teaspoon; it turned over in the Borders mugs like a stray water-wing.

Music seeped through the tinny speaker in the staff room.

I blew on the tea; the tanned water rippled. The table in the staff room was covered with old Heat magazines. Brad Pitt had left Jennifer Aniston.

“Poor Jen,” Pawla the Polish bookseller sat opposite me, stirring her tea.

“Do you really think he’s having an affair with Angelina Jolie?”

“Of course.” Pawla had long spiral hair like a gypsy. When it came to matters of the heart her advice was never less than sage.

We inspected the photographs of Brad and Angelina on the set of their latest film. They leaned over a railing between takes, smiling. The borders of love can easily be breached.

A drip grew on the gnarled lip of the tap above the kitchen sink like a bungee jumper, finally let go and plunged over the edge.

The microwave beeped. I got up and peeled the shrink-wrap off.

Over the in-store tannoy the new Irish general manager announced the latest in-store specials: “Please ask a member of staff for more details.”

Pawla raised an eyebrow. “I bet you do.”

“What happens next in your book?” she asked.

“The lead character has an affair with the boss,” I said.

After dinner, I chose a grey V-cart from the line up along the staff corridor. I glanced at the map which depicted the staff assembly point in case of fire. Cartoon flames gushed from the square that represented Borders Islington. I had drawn the map. But there were no fires at Borders Islington in the time I worked there. Instead, the toilets in the cinema above the store often overflowed and water dripped through the ceiling tiles. Books damaged by flood rather than fire.

I steered my empty V-cart towards the sort room.

A poster of a romance novel cover adorned one wall: Touch Not The Cat. A mountain cat sat in the centre of the poster. A man in a kilt with Fabio-flung hair rested one gentle hand on the cat – the one that was not to be touched. The book was written by Tracey Fobes, I doubted any of the staff had ever read it, but it was a talisman of great personal amusement to us. The author’s vision of the world was undoubtedly more smouldering than mine.

The lift doors opened on the first floor. Computers was located in the corner. Its one highlight: a vertical window that looked out over Sainsbury’s and a small stretch of road. I shelved, pausing every now and then to stare at the red-bricked wall of Sainsbury’s or to follow that short stretch of road into the black volume of another London night. On the back of each book was a binc sticker that contained a code for the section. I consulted the code, then placed the book into its approximate order in the bay. Shelving produced a deep state of intellectual fatigue. In the Mind Body Spirit section the books bore titles like: Who am I? How did I get here? Where am I going to? In Computers the books bore titles like Dreamweaver 5 and Java SE7 Programming.

I plugged away at the V-cart. An abandoned Verde Grande Starbucks coffee cup lay tipped over on an empty shelf. Milk had dried onto the wooden veneer; a trace of someone else’s orgasmic day.

At the end of the shift a buzz came through on my walkie talkie.

“Megan, meet me out the back of the fire doors on the ground floor,”  the manager said. But it wasn’t a lover’s tryst that awaited me.

“What is it?” I arrived on the scene.

“Look.” The manager pointed at the steaming pile of shit on the floor.

I covered my mouth. “I know who did this.”