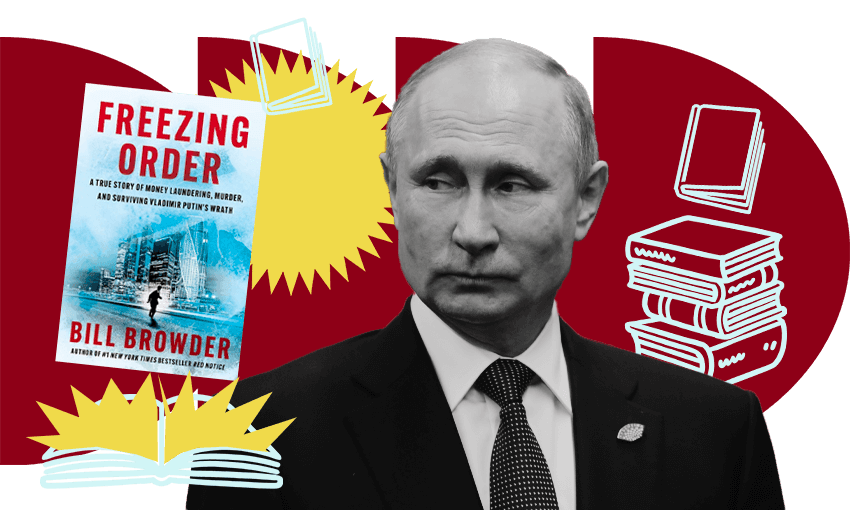 With a cover like a sci-fi thriller, a bestselling author’s name on the front (remember Red Notice?), and a backbone of real-life facts about becoming Putin’s “number one enemy”, Freezing Order was destined for number one-dom. A smidge of the blurb:

“When Bill Browder’s young Russian lawyer, Sergei Magnitsky, was beaten to death in a Moscow jail, Browder made it his life’s mission to go after his killers and make sure they faced justice. The first step of that mission was to uncover who was behind the $230 million tax refund scheme that Magnitsky was killed over. As Browder and his team tracked the money as it flowed out of Russia through the Baltics and Cyprus and on to Western Europe and the Americas, they were shocked to discover that Vladimir Putin himself was a beneficiary of the crime.”

The biggest local memoir of the year. Catherine Woulfe has buckets of praise to share.

Less than a week until the Ockham New Zealand Book Awards ceremony (Wednesday 11th, we’ll publish the winners plus a bit of commentary at 9pm) and this week, like most weeks, the popular vote for the Jann Medlicott Acorn Prize for Fiction goes to Rebecca K Reilly.

From Stuff: “[Ruth Shaw’s memoir is] packaged in a beautifully produced book, which feels comforting to hold, and could lull readers into the false belief that this is merely a whimsical musing on the trials and tribulations, joys and triumphs of bookselling and the folks one meets.

“These stories are woven throughout The Bookseller at the End of the World, but it is much richer than slice-of-life remembrances. Early on, she matter-of-factly explains how she was raped as a teenager and what the ensuing consequences were. These included being sent away to give birth to a son who she was not allowed to see.”

The new novel by the Booker-winning author of Shuggie Bain, here to pull at your heartstrings.

6  Otherlands: A World in the Making by Thomas Halliday (Allen Lane, $40)

A new history of the Earth, covering 500 million years of life on our planet. We’ll let the publishers convince you that Otherlands is the one for you:

“Otherlands is an epic, exhilarating journey into deep time, showing us the Earth as it used to exist, and the worlds that were here before ours. Travelling back in time to the dawn of complex life, and across all seven continents, award-winning young palaeobiologist Thomas Halliday gives us a mesmerising up close encounter with eras that are normally unimaginably distant.

“Halliday immerses us in a series of ancient landscapes, from the mammoth steppe in Ice Age Alaska to the lush rainforests of Eocene Antarctica, with its colonies of giant penguins, to Ediacaran Australia, where the moon is far brighter than ours today. We visit the birthplace of humanity; we hear the crashing of the highest waterfall the Earth has ever known; and we watch as life emerges again after the asteroid hits, and the age of the mammal dawns. These lost worlds seem fantastical and yet every description – whether the colour of a beetle’s shell, the rhythm of pterosaurs in flight or the lingering smell of sulphur in the air – is grounded in the fossil record.

“Otherlands is a staggering imaginative feat: an emotional narrative that underscores the tenacity of life – yet also the fragility of seemingly permanent ecosystems, including our own. To read it is to see the last 500 million years not as an endless expanse of unfathomable time, but as a series of worlds, simultaneously fabulous and familiar.”

The new novel by the author of Station Eleven. A time-travel fantasy about pandemics, moon colonies and the paranormal. The Guardian is a fan, writing that “​​Sea of Tranquility continues the good work done by Station Eleven in seducing new readers to speculative fiction. In fact, the book uses many more out-and-out science fiction conceits – space travel, sinister scientific institutions – but with a lightness of touch, as though they are intended to be glimpsed out of the corner of an eye that’s focused on the human dramas at the book’s centre … It conveys the vertiginous sense of a reality that transcends a single existence and feels simultaneously poignant, celebratory and uncanny.”

Journalist Andrea Elliott followed Dasani’s upbringing for eight years, through homelessness, poverty, and parental drug addiction. Author Ayad Akhtar said, “From its first indelible pages to its rich and startling conclusion, Invisible Child had me, by turns, stricken, inspired, outraged, illuminated, in tears, and hungering for reimmersion in its Dickensian depths.”

The new poetry collection by the author of On Earth We’re Briefly Gorgeous, written after the death of his mother. An excerpt:

He stood alone in the backyard, so dark the night purpled around him.

I had no choice. I opened the door

in the branches. He watched me with kerosene

-blue eyes. What do you want? I asked, forgetting I had no language. He kept breathing,

which meant I was a murderer …

Wellington Architecture has been number one in Welly for four weeks in a row. What can we say – Wellingtonians are a bit house-proud.

Poetry to make you crave a steak. We’ve a full review in the works but in the meantime here’s Paula Green, writing for Stuff: “The first poem, The Flexitarian, begins in a supermarket meat aisle and ends with meat sizzling in a pan. The sensual dexterity, the aural finesse, are so compelling I am transfixed. Assonance meets alliteration meets addictive rhythm. It’s like falling upon a song you love that you keep on replay. This poet can write.”

Another brilliant collection of local poetry, this time by The Spinoff’s very own poetry editor. We published a review, which includes phrases like “Tse’s poetry often walks the line between the bizarre and the banal … and he juxtaposes the two with lightning-quick wit” and “sharp observation of the social fabric of Aotearoa, and an unabashed, loud call to action”.

A new addition to the BWB treasure trove. Don Rowe recently interviewed some of the authors – here’s his succinct summary: “Fragments from a Contested Past is the result of a three-year study into how the New Zealand Wars have been remembered – and forgotten – over the last 150 years. Authored by a team of writers and researchers, many descended from iwi attacked and invaded during the 19th century, the book aims to contextualise the way we understand our collective past, and how that understanding frames our present and future.”

The second BWB mini treasure in a row!

The new novel, hot on the heels of Smith’s seasonal quartet. Smith reflects our post-pandemic world, alongside England’s Black Plague in the Middle Ages.

10  Amongst Our Weapons by Ben Aaronovitch (Gollancz, $38)

The newest novel in the Rivers of London urban fantasy series. Pure joy on a page.