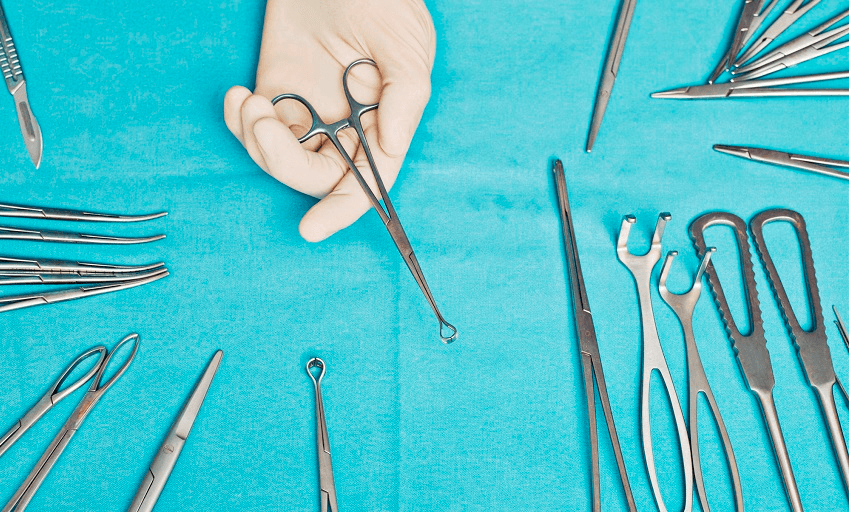 Book of the week: Carl Shuker’s masterful novel about a medical emergency

The story that Carl Shuker tells in his novel A Mistake is delivered in a concise, razor-sharp style without an ounce of fat left on the bone. Such imagery is appropriate: just take a look at the front cover with its blood-suffused viscera being probed with forceps and trocar. A trocar, I learnt via Google, is a surgical instrument with a three-sided cutting point. Its application is central to the novel.

In the first few pages the dialogue is peppered with other medical terms such as tachycardic, McBarney’s point and salpengitis. The back cover tells us that the author is a former editor at the British Medical Journal, and it’s clear that he knows the ins and outs of an operating theatre. What is also clear is that we are present at the start of a medical emergency. A young woman, Lisa, is suffering from severe abdominal pains and is rushed into surgery. Presiding over the operation, and guiding/commanding her team, is the surgeon, Dr Elizabeth Taylor.

Elizabeth is a force to be reckoned with. She comments on the efficiency of the Hasson open technique, the method she employs to puncture the young woman’s stomach, and insists on having a thrash metal song played in the theatre to keep her focused. There’s no doubt that Elizabeth is highly skilled and in control. But the title of the book hovers in the background. The reader knows that something will go seriously wrong, and it does.

As the tension mounts, she instructs her registrar, Richard Whitehead, to insert the last trocar. “Richard pushed the trocar hard into the girl and it sank slightly and stopped. Elizabeth stared up at the screen with the camera handle in one hand. ‘You’re not through,’ she said. ‘Hurry up. Give it some welly . . .'”

That last phrase, delivered in an off-hand manner, will reverberate throughout the book.

The inherent tension of A Mistake, which holds the reader to the page, is the tension between chaos and control. This is highlighted by a parallel narrative that is woven through the text; that of the ill-fated launch of the space shuttle Challenger in 1986, which exploded just after take-off. When lecturing, Elizabeth tells her students it’s a “beautiful story of error”. She’s fascinated by the technical complexities that led to the Challenger coming apart; how an unknowable and unforeseen chaos had manifested itself in the disintegrations of the space shuttle. In summing up her lesson she states: “There are simple problems, complicated problems. And then there’s just chaos.”

During the operation on Lisa, as the pressure mounts, she tells her team, “This is a controlled emergency, not a chaotic emergency.” We don’t know if she regrets those words later on when what happened on the operating table is examined in forensic detail.

After the operation, Elizabeth is drawn into her own vortex with fragments of her life whirling around her: a meeting with the parents, a Ryan Adams concert, a conference in Queenstown, the wonderfully named Morbidity and Mortality meeting, and a sudden trip to Auckland (which will have its own repercussions). Most vividly, there is her reckless, white-knuckle drive on a Sunday morning around the (thankfully deserted) streets of Wellington. The reader could plot her progress on a map of the city as she speeds like a rocket through Island Bay and into Newton.

We view Elizabeth almost entirely from the outside, without directly accessing her inner world or exploring her psychology. Shuker’s writing is so assured that it’s not necessary; we learn about Elizabeth through her actions. While sitting on the toilet seat at home, she recalls a dream of cutting into a young woman’s body and suturing together the lips of the wound. But this is just a replay of the operation on Lisa with little emotional resonance.

Data casts a long shadow in the novel, specifically the government’s proposal to collate and publish data on surgical failures, on patients lost, and in doing so naming and shaming medical practitioners. Where does Elizabeth sit in all of this; is she above or below the line of acceptable outcomes? In fact, on a graph that is reproduced twice in the book, she is beyond the data-funnel, in her own space, floating like an astronaut: “She had escaped the trap. Her dot was free of the limits. Free of all limits. Out there on her own. Out of control. Wrongly machined, wrongly calibrated.”

Is the character of Elizabeth believable? Yes, entirely so. And this is what makes A Mistake a success. We are compelled to stick with her as she defends her conduct during the operation to her superiors or exchanges barbed comments with her colleagues. Is she a brilliant surgeon or, as her friend Jennifer calls her, “a fucking psychopath”? Or both? It’s up to the reader to decide. Shuker passes no judgments. What we do know, reinforced by our last view of Elizabeth – loading slabs of gib plasterboard onto the roof of her car – is that she’ll continue to go her own way with a fierce determination, regardless of what others may think.

Mistakes happen. Outcomes have repercussions. The outer world and the inner world are incredibly complex and overlapping. Perhaps it’s as simple as that. We learn from our mistakes and move on. But did Elizabeth learn from hers? And would you consent to going under her scalpel? Shuker’s accomplished novel raises many questions. His novel will linger with you long after you have finished the last page.

A Mistake by Carl Shuker (Victoria University Press, $30) is available at Unity Books.