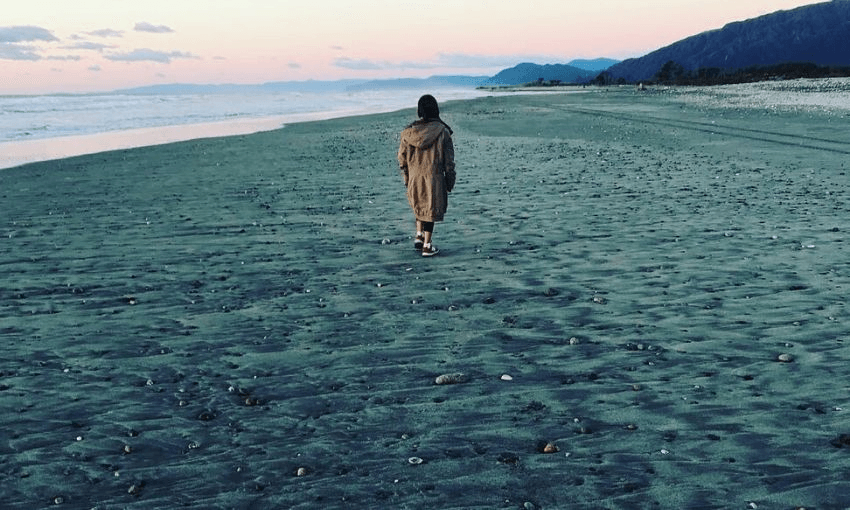 Becky’s daughter on Waimangaroa Beach, the Papahaua Ranges in the pink distance.

A day’s grace: an essay for the new year, by Becky Manawatu

By Becky Manawatu
Guest writer
Made possible by

Becky’s daughter on Waimangaroa Beach, the Papahaua Ranges in the pink distance.

Auē author Becky Manawatu picks holes in her mahi and then starts to sew them up again, in this essay about colonialism and tikanga and the smoke in the sky.

Anahera Gildea had drawings on her torso and I couldn’t see them properly from where I was standing at the back of the Chocolate Factory in Wellington.

I wanted to be closer to her. Her beauty was something that I wanted to cup, hold, take and run away with.

It was the coloniser in me, the thief, the magpie. Itching to draw closer, so she would look at me, so that I could hold her gaze for a second. Maybe after I could’ve drawn her attention away from the other people that wanted it, like Becky with the Good Hair in the introductory te reo class. I could’ve complimented her, said: “How brave of you to stand there, half naked in a room full of strangers”. I wouldn’t have wanted these words to sound desperate, but the pitch of my voice would have turned high, and I would have sounded so very, very desperate. Anahera would’ve seen through me, seen I was there to glean something from her.

And she would’ve been justified in turning her back on me.

She was not there to be the friendly native. Not even for you, Becky with Alright Hair.

I whakapapa Māori, and I can tell you that until I’m-never-going-to-be-actual-brown in the face.

What I can do, if I’m gonna be the change I want to see in Aotearoa – the land of the long white cloud, a cloud which has recently become a plume of apocalyptic smoke – is stare my own coloniser down. Cute and harmless looking, like a baby rabbit, but a saboteur by nature.

Over the Verb Fest weekend I went to several awesome events and had two favourites. First was ‘The Savage Eye’ at which Anahera Gildea, Brannavan Gnanalingam, essa may ranapiri, Ruby Solly, and D. Nandi Odhiambo responded to the end of Tina Makereti’s The Imaginary Lives of James Poneke.

That morning, in my hotel on Manners Street, where me and my hubby spent a weekend away from the kids, I read my brand new copy of Sport 47.

Anahera’s wānanga with Patricia Grace made me cry. Admittedly they were probably fragile white woman tears, but I’m here to state the facts, and tears are facts. The emotion which drew them out, of course, remains to be a much greyer area.

I cried factual tears as I read the words, because they made me uneasy.

For a start, in Te Ao Māori, the maunga are to be honoured.

If I were Patricia Grace, when the characters in my book Auē directed their curses, their hatred of a monstrous man at mountains, I would have made it clear that this was not tika, that this represented their displacement, their loss, their struggle, and their ferocious, blinding, disorientating anger.

As I continued to read the wānanga between these women, the fact is, I fell into an abyss. A cool, dark abyss, in which I decided to sit, and let drops of icy water from somewhere inside the abyss fall and fall on me and I did not get up. The fact is, I sat with this whakamā until I could no longer bear the mamae, but then I pressed myself down by my shoulders and stayed longer.

If this seems a dramatic reaction, imagine you have spent years doing your very best, to produce something you want to be beautiful and whole, and realising you are barely tying up your laces to begin your journey.

As a kid I was often told I had mutton birding rights. I could go to the Tītī Islands and snare birds if I so chose to. Because I loved those salty birds and because they were not to be hunted by just anyone, I relished this knowledge. Puffed my chest out a bit to hear it.

But just because I can snare me a manu if I so choose to, does it gives me access to “all things Māori”?

Nah babe, that’s the coloniser in you.

Up until I was about 20, I always checked the box to indicate I identify Māori. For a period I stopped, because could I still be Māori – feel the mana of what it means to whakapapa Māori – when I have lived a life of white privilege? If I checked that box might I take something from someone who has had to work harder to navigate the one-size-fits-all-who-like-boxes system? Who has had to front actual racism? I understand this is not a tika way to look at it now, but I was young and stupid and perpetually trying to work out who I was.

As it turns out, identity continues to elude me. Which is why I am writing about the persons I am.

As I said, I am here to tell you something – explain, shout, confess something – put my inner coloniser before the world, so she loses her grip, so she becomes the tamed, the servant, the least important person in the te reo class, I’ll gag her at kura, and make sure she shuts the fuck up and just listens.

When I was living overseas I wrote about home.

I listened to a song often: ‘Akoako o te Rangi’, in fact I became obsessed with its strange and beautiful words. I have written story after story with this song’s lyrics at the heart. I obsessed over it partly because of the meaning:

Beneath a tree, stricken with love, I crept

Weary and lost, alone I slept

Softer than silence o’er my brow they played

Wafting love’s incense to my soul

Calling “Awake fond one, the heavens are glowing

There is no darkness love cannot light.”

Though I was obsessed with the song, I only took a brief look at its whakapapa.

When I read the song, for some reason, I thought they seemed quite Pākehā lyrics.

Then I read somewhere that it might have been written in English, and translated into te reo.

I don’t know where I read that, but it stuck in my brain.

I wrote a really pretty scene in my novel Auē.

Two star-crossed lovers, Jade and Toko, are on a boat, and they are talking and he sings her ‘Akoako o te Rangi,’ and she asks him what the words mean. And he tells her the song was written by a Pākehā “so it’s tragic”.

He is being cheeky, and trying to pretend he knows it all, and she is impressed by her “smart husband”.

But his facts were wrong, or he might’ve been wrong, (the whakapapa of the song says a few different things) and, once again, I never made this clear. I didn’t make it clear in Auē or the acknowledgements that this was supposed to be sort of symbolic. (Ick, symbolism, what an arsehole I am.)

Toko didn’t know about the song, but he pretended to, in doing so he did an injustice to the waiata and its Indigenous writer.

That I didn’t take the time, slow my arse down and think about things in the book that didn’t belong to me, that needed to be acknowledged makes me think one thing: Good one coloniser.

She was the daughter of William Flavell and Mary (Downes) Flavell

She married Henare Kaihau in 1903.

On her father’s side she is said to have descended from French nobles fleeing the French Revolution, and from a musician from the court of the Austrian Emperor. On her mother’s side she was a direct descendant of Ngāpuhi chief Hone Hika of Ngāti Rahiri and Ngāti Rehia hapū.

I love her song like I loved seeing Anahera’s bravery, her bare torso with the smell of chocolate all around, and before her was essa talking about the managerial style dress they wouldn’t buy and once Brannavan badly injured someone with a cricket ball and Ruby was serious but funny, and super beautiful, and Nandi had a voice that assured us compassion was alive and well in the world, even if it isn’t.

My other favourite session was Toby & Toby’s thing with mystery guests including Renée.

Renée, 90 years old, was on stage, cracking the jokes and holding the crowd, telling people to thank the cleaners because without them the world would fall apart, and she told us she revolutionised her own life at 50. “Watch out,” she said, laughing, slapping her thighs, “it could still happen to you!”

None of us can really be sure in what direction we want to revolt until it bursts from us, I think.

But now the earth is revolting, with or without us, and while I sit at my computer in Waimangaroa and look out the window at beautiful rain falling on another less than ideal summer’s day, this rain looks like grace.

And it appears that that’s all we have left, for all we’ve ever done, for all the capital gains, and taxes we’ve paid, and bottles we’ve recycled and hangovers we’ve avoided, relationships we’ve escaped and sins we’ve confessed, gas we’ve not wasted, sickies we’ve not pulled, messages we have stopped ourselves from sending, savings/debt we’ve earned interest on, all we have to show for our best intentions is another day’s grace.

And hope, I suppose.

And where do we start?

Here is where I am starting, tying up my laces, one flawed book as my starting block:

*Lyrics from ‘Akoako o te Rangi’, written by Emira Maewa Kaihau and not a Pākehā.