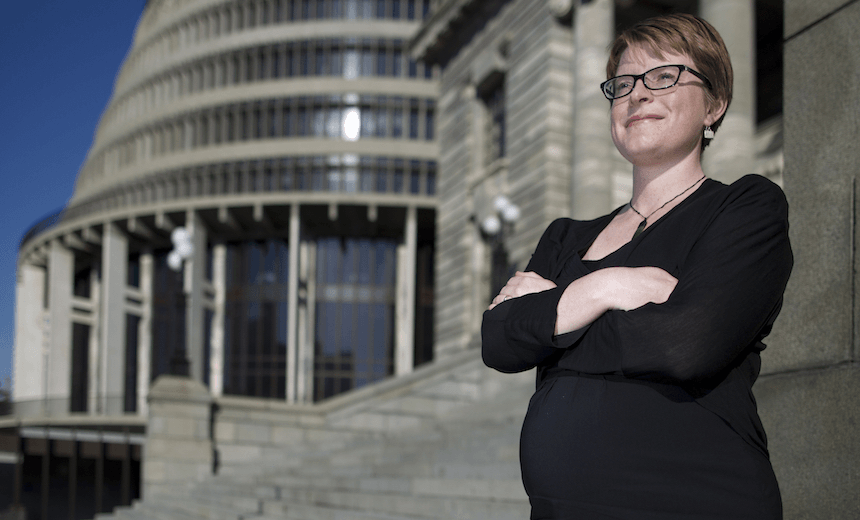 ‘There is nothing normal about crawling up the hallway, screaming and hitting yourself in the head’: former Green MP Holly Walker shares her story

All this week the Spinoff Review of Books is devoted to a candid, sometimes shocking new memoir by ex-Green MP Holly Walker about her experience as a working mother in parliament. Today: an excerpt.

One Friday morning, about three months after my return to work, I held a drop-in clinic for constituents in Petone. Parliament was not sitting. When the clinic was over, I met Dave and Esther, fed her, and took her for a walk around our local park while she slept. It was a beautiful day, and I felt a rare sense of ease and wellbeing, so I took a picture and tweeted it, saying something like “What a perfect Petone day.”

A few days later, one of the Green Party’s press secretaries rang me up. A press gallery journalist, herself a working mother with young children, had seen my tweet and thoughtfully passed on that, to parents with children in daycare who would like nothing more than to be out walking with them on a sunny Friday afternoon, an MP posting a tweet like this was not a good look. The press secretary gently suggested that I might like to be sensitive to this. I took the feedback meekly, thanking her and agreeing to be more judicious in future. I could see how a mother with her own kids in daycare could look askance at that.

But after hanging up the phone I burst into uncontrollable sobs. And after I had finished crying I became furious. I pulled out my laptop and started typing.

Well thanks. I’ll be sure to take that on board. Far be it from me to model the kind of flexible working arrangement that might actually encourage other mothers to see Parliament as a viable choice for them. I certainly wouldn’t want to give the impression that politicians ever have any time off. Of course it’s beyond comprehension that I could ever take my baby with me to work, whether to the office or with me on community engagements. No one would ever assume, seeing me do something with my kid during the day, that I spend the nights catching up with emails, writing press releases and question bids, reading legislation and select committee documents, planning an election campaign, on conference calls, replying to correspondence, reviewing policy documents and peer-reviewing my colleagues’ work, all before I go to bed and wake 3–5 times per night to feed my baby, and then get up in the morning to do it all again. Never mind the fact that my partner has given up his job and worn holes in the soles of his shoes walking our baby to sleep so that I can stay in this job. Or the fact that even if I was ‘just’ caring for my baby, that that alone is bloody hard work.

I never inflicted this diatribe on anyone else. The press secretary and the journalist meant well, and their advice was sound – perception matters. I channeled my rage onto the page and moved on.

But when I came across these words again recently, I was struck by their honesty and the rawness of the emotion. These, I suspect, are feelings shared by countless mothers in all sorts of jobs (including those parenting full time) frustrated at the perception that caring for young children is not ‘real work’, or that fitting in downtime with your kids around your other responsibilities is somehow ‘slacking off’. That taking a moment to record a happy moment means your mind is not on the job, or that life as a parent is some kind of holiday.

I knew these perceptions existed, and I was sensitive to the idea that people might have them about me. Yet when I returned to work after Esther was born I worked hard to convince myself that it was all in my head. No one was judging me. I knew that I was doing a good job under difficult circumstances, and others would take this into account too. This piece of well-intentioned advice crushed me because it confirmed my worst fears – others were judging me, and they thought I wasn’t working hard enough.

How to navigate the impossible expectations we collectively place on working mothers became a strong theme in my reading later on. Of the many books and articles I devoured, looking for answers, The Wife Drought by Australian political journalist Annabel Crabb became a favourite. She nails the problem: “The dilemma of the working mother is a very precise one. She is expected to work as though she did not have children, and to raise her children as though she did not have a job.”

For an MP, who is expected to look as though she is working all the time, lest she be accused of slacking off on the taxpayer dime, this dilemma is even more restrictive. Perhaps it was not surprising that I was not coping.

For a while, I managed to convince myself that what I was experiencing was a combination of ‘normal’ new-parent sleep deprivation and a high-stress job, until one day in May 2014, I couldn’t pretend any more. There is nothing normal about crawling up the hallway, screaming and hitting yourself in the head, in front of your baby, and then pulling yourself together 10 minutes before 20 volunteers arrive at your house so that you can train them and then lead them out to canvass the neighbourhood door to door.

Coming up on The Spinoff Review of Books:

Wednesday: An essay by Tessa Duder in response to Walker crediting Duder’s classic novel Alex as a formative experience.