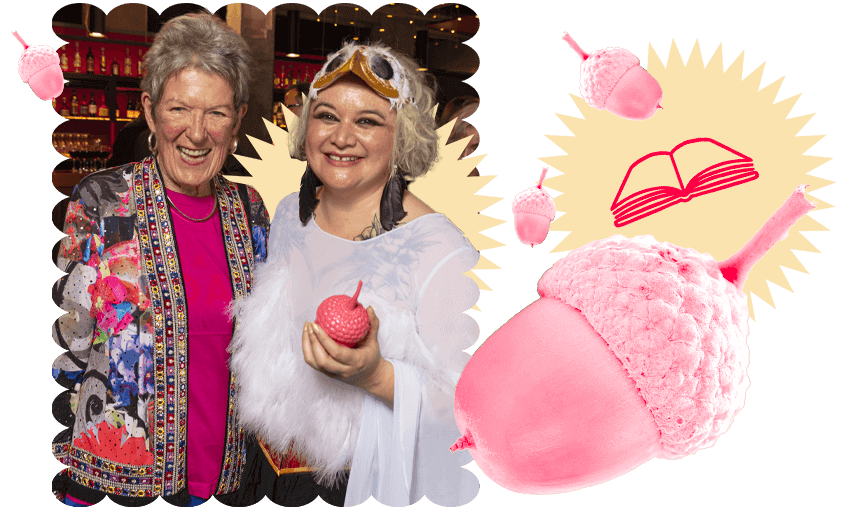 We have a feature piece on this autobiographical novel underway, in the meantime this section of the acknowledgements speaks volumes:

“Thank you to the chaotic city of Tāmaki Makaurau from which I’ve burned, bloomed and rebirthed myself several times and on which I have vaguely based this book. Ngā mihi nui ki ngā iwi Ngāti Pāoa, Ngāi Tai, Te Wai-o-Hua, Ngāti Whātua-o-Ōrākei, Ngāti Te Ata me Te Kawerau ā Maki. Thank you to all the communities here who, despite the eternal tussle with gentrification, colonisation, housing and death-rattle-stage capitalism, physically endure and stay creating culture.”

A new, local memoir that books editor Catherine Woulfe recently raved about – here’s an excerpt from said rave: “[McCarthy’s] anecdotes are gothic, peculiar; they sound like bad dreams. There’s the time her mother brings home a huge mangy rabbit from the pub and it gets loose in the garden and slams itself into a hole in the wall, screaming. The time her mother takes Noelle, aged about six, to buy pretty white shoes for communion, then to a pub where she reveals the secret history of their family, her two eldest, secret children. Jonathan “the product of rape, Mammy says” died 11 hours after he was born. Tara was adopted out. On her worst nights Mammy screams for her lost children.” Shivers.

4  The Candy House by Jennifer Egan (Simon and Schuster, $38)

The newest novel by Jennifer Egan, and a continuation of her Pulitzer-winning A Visit From the Goon Squad.

5  The Palace Papers: Inside the House of Windsor, the Truth and the Turmoil by Tina Brown (Century, $40)

Twenty years of Royal Family dirt. If you’re rolling your eyes, here are some pluses to consider: Helen Mirren likes it. Also, the Times calls it “exhaustively researched” but also “disgustingly entertaining” and an “unashamed romp”. It feels like years since we had a romp!

Hats off to those indefatigable souls still trying to better themselves.

For five days in December 2013, Andrea Elliott’s reporting about Dasani, a child living in a Brooklyn homeless shelter, appeared on the front page of The New York Times. Invisible Child covers eight years of Dasani and her family’s lives. From the New York Times: “The reporting has an intimate, almost limitless feel to it, the firsthand observations backed up by some 14,000 pages of official documents, from report cards to drug tests to city records secured through Freedom of Information Law requests. The result of this unflinching, tenacious reporting is a rare and powerful work whose stories will live inside you long after you’ve read them.”

Greta & Valdin was also shortlisted for the Jann Medlicott Acorn Prize for Fiction, which was won by Whiti Hereaka’s brilliant Kurangaituku (which is somehow not on the lists this week, but has been for ages and no doubt will return triumphant next week).

Her boy was stooped slightly, the rucksack a little hump on his back. Unsure of what he should take, he had packed it with half-hearted nonsense: an oversized Fair Isle jumper, teabags, his dog-eared sketchbook, a game of Ludo, and some half-used tubes of medicated ointment. Yet he wavered on the corner as though the bag might tip him backwards into the gutter. Mo-Maw knew the bag was not heavy. She knew it was the bones of him that had become a dead weight.

Manapouri bookseller, environmentalist, sailor, four-time wife, navy deserter, Kings Cross dweller Ruth Shaw has written a memoir, and it’s packed to the gills and brimming over with a life lived to the fullest.

The debut poetry collection from Wellington-based writer Khadro Mohamed, about the experience of being a Muslim woman in New Zealand. Unity Wellington hosted the book launch on Tuesday, and it was a smash hit.

A book that teaches Wellingtonians to do what they do best, but even better: walk around and love on their city.

We’ve a full-length review in the works but let it be known this slim new novel is possibly maybe even better than Sprigs, which was shortlisted for last year’s big fiction prize and which we fricking adored. It’s a horror about two little kids locked in a grotty flat with no adults.

The star child, now joined by sort-of-sibling Fragments at number six. We hope Imagining Decolonisation is enjoying the company.

This compact BWB text explores how the New Zealand Wars have been remembered through different narratives over the past 150 years. Don Rowe wrote an article about Fragments recently, in light on the new Aotearoa history curriculum.

8  Down From Upland by Murdoch Stephens (Lawrence & Gibson, $30)

“Down from Upland is a kitchen sink, domestic novel that opens at the precise moment the first Millennials find themselves raising a teenager.

“While flirting with an open marriage, Jacqui and Scott nudge their son on a more moderate course as he begins at a new high school and makes new friends.

“Skewering the best and worst of Wellington’s leafy middle class, the novel features public servants with varying degrees of integrity, precocious Wellington High students and a foreign lover at the end of a working holiday visa.”