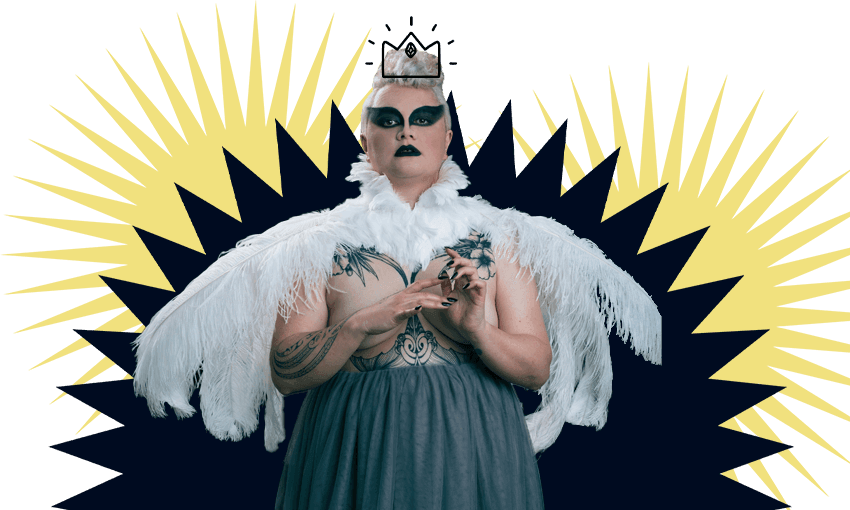 Books editor Catherine Woulfe on the Ockham New Zealand Book Awards, which were presented at a ceremony in Tāmaki Makaurau moments ago.

All bow down to the birdwoman and her magnificent story – Whiti Hereaka’s Kurangaituku (Huia Publishers) has won the richest and most prestigious prize in New Zealand fiction, and rightfully so.

When the finalists for the Jann Medlicott Acorn Prize for Fiction were announced we said:

If the judges are out to recognise innovation, audacity, brilliance, give the Acorn to Whiti Hereaka for this book she spent 10 years building …

[The] story belongs to Kurangaituku, the bird-woman, the monstrous kōtuku, known for being bested by wily young warrior Hatupatu. She has a different version of the story. Terrible, vulnerable, lusty, a weaver, I adored her and remain in awe of her. Kura knows it, too. In sharing her story she is “making her nest in your brain”, she says. “I will lurk in the shadows of your mind.” The designers at Huia have gone for elegant long em dashes and as I read I started to feel they were Kura’s kōtuku feet, stalking alongside me.

We also published a reverent review by essa may ranapiri, who wrote of the way Kura mirrors and speaks to them as takatāpui. Reading Kurangaituku “felt like coming home”, they wrote. “In a way all of us queer wāhine, wāhine takatāpui, have felt some form of shelter under the feathered arms of this bird-woman, who is ready to kill for us if need be.”

Sixty grand will be winging its way to Whiti’s bank account any day now. Caw!

The other novel we liked heaps, the scarily clever and funny Greta & Valdin by Rebecca K Reilly (Ngāti Hine, Ngāti Wai) (Te Herenga Waka University Press) won the Crystal Arts Trust Best First Book Award in the category, and with it $2500. You should absolutely buy this book if you just need a break from the shitness for a bit.

Joanna Preston wins for Tumble (Otago University Press). Back in March, our poetry editor Chris Tse wrote: “based on gut feeling (which is how I bluff my way to winning Oscar prediction contests every year) I think it’s Tumble for the win.”

He’s now frantically busy over at the Brisbane Writers Festival but sent us this snippet:

“A really well-crafted poem is like a precious stone that you can slip into your pocket to reach for when you need reassurance or to connect with something beyond time and space. Joanna Preston’s rich and rewarding collection Tumble is a basket of precious stones, each a representation of the steps and missteps taken through life. Tackling the world around us with hungry eyes, a full heart and sparkling feminist streak, Preston’s collection is one many readers will keep returning to as they accumulate their own stories.”

Onwards we press, to the land of pretty pictures and stylish coffee-tablers. And the first big surprise: this award went to Claire Regnault for Dressed: Fashionable Dress in Aotearoa New Zealand 1840 to 1910 (Te Papa Press).

I adored the cover on Dressed, and spent a lot of time squishing it – it’s quilted, and millennial pink, and just sumptuous. Then I gave it to Sam Brooks, who squished it too, and wrote this in his review:

It makes sense that a book about fashion – literally the human version of a book cover – should have such a good cover. But the quality of Dressed goes deeper. This is a meticulously researched, well-detailed look into fashion, an art and a craft that can often be dismissed as frippery. It’s not, obviously: the history of fashion is deeply entwined with the history of the world. Fashion is art, fashion is economics, fashion is culture, fashion is function. World history didn’t happen naked (except for all the times it did, I suppose).

Regnault sums up her thesis, and the scope of her project, early on: “Every garment prompts a set of questions: Who made it? Who wore it and where, and what were their lives like?”

Regnault’s vivid descriptions are supported by photos both archival and current, and it’s the current photos that make Dressed such a vital, and fascinating, document.

Despite the above I had backed Bridget Hackshaw for the win for her light-drenched, gorgeously put-together study of stained glass The Architect and the Artists: Hackshaw, McCahon, Dibble (Massey University Press). She did, however, win this category’s Crystal Arts Trust Best First Book Award.

That leaves the other widely-touted frontrunner, Lucy Mackintosh, out in the cold with her impressive history of Auckland, Shifting Grounds (Bridget Williams Books). “A confrontation of ignorance, but a gentle one,” wrote Anna Rawhiti-Connell in her review.

Speaking of upsets: Charlotte Grimshaw is leaving tonight’s ceremony empty-handed despite writing The Mirror Book, a sensation, indisputably the book of the year.

Grimshaw was a finalist in this wildly overstuffed and eclectic category, which surely now needs to change – what’s happening is unfair on the writers and on the judges.

Vincent O’Malley wins the category this year for his history book Voices From the New Zealand Wars / He Reo nō ngā Pakanga o Aotearoa (Bridget Williams Books). The book is compassionate and stirring and nuanced, the sort of history book that people actually read and connect with, the work of a great scholar, with a stirring foreword by Arama Rata. (We published an excerpt from the book, with commentary from O’Malley, to commemorate the passing of the hugely significant New Zealand Settlements Act.) And of course a nod for this book is also a nod to O’Malley’s previous terrific books on the wars.

O’Malley deserves the win. It’s just, Grimshaw does, too. And the judges shouldn’t have had to pit them against one another. Pure incandescent memoir versus a careful, arresting work of historical scholarship: it makes no sense. It’s as absurd as squeezing novels and poetry into just one category. It’s not working. As well as Grimshaw dipping out, this year the judges also ended up ditching a slew of brilliant essayists before the finals: Michelle Langstone, Nina Mingya Powles, Danyl McLauchlan, Megan Dunn and Ingrid Horrocks all produced wonders and deserved a spot at the table. (Dave Lowe won the Crystal Arts Trust Best First Book Award for his climate crisis memoir The Alarmist (Te Herenga Waka University Press); we published a review by young glaciologist Clarrie Macklin.)

Solution: a new category. One for creative nonfiction, that is memoirs and essays, the books that use truth as a jumping-off point as opposed to a raison d’etre. We’ve said this before. It’s getting boring.

Apparently the major roadblock is money. A new category won’t happen without a sponsor to cover the prize money – $10,000, if it’s to match the other big four. There’s also probably a bit of admin that needs paying for. That sounds like heaps of money to me but it is not heaps for big or even medium corporates. Are you a big or medium corporate or just someone cool with money to spare? Do it. Dooooo it.

For your money you get your name attached to the cultural moment, and to a bunch of achingly cool, popular books. Readers adore memoir and essays. These books routinely outsell local fiction. They get Canvas covers and Kim Hill interviews and ecstatic reviews at this here Spinoff and just generally heaps and heaps of traction. I don’t understand why sponsorship has been so hard to find. It seems like a sitter. So, quick: if you have a bit of cash and want to be cool and support cool writers please for the love of god and good books email manager@nzbookawards.org.nz.