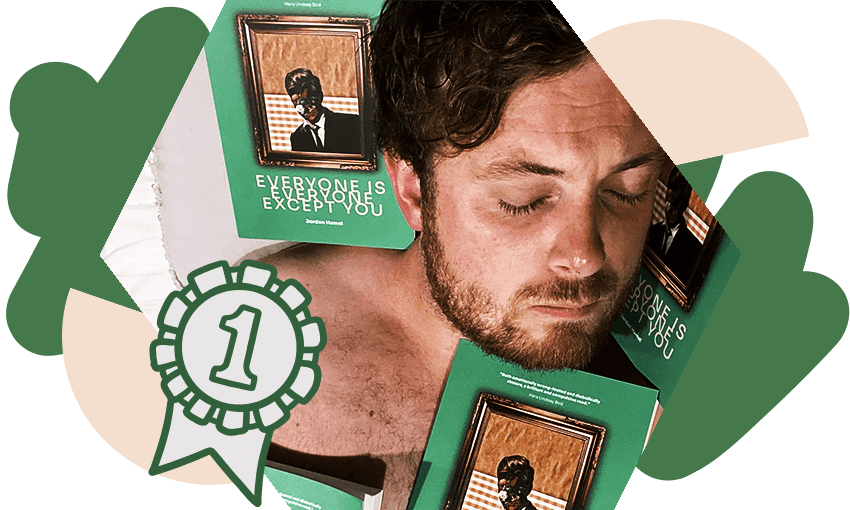 A debut thriller by a local writer, set across Afghanistan, New Zealand and New York.

Let the lists of glorious adjectives begin: New, local, genre-bending, autobiographical fiction. Musician, artist, advocate and writer Coco Solid combines words with photography and line drawings to create something new and fresh – we have many more things to say about her new novel in a coming-up-soon interview, so will bite our collective tongues for now.

Meanwhile here’s a link to one of Coco’s recent music videos.

The spectacular novel which last week won the 2022 Jann Medlicott Acorn Prize for Fiction! We couldn’t be more pleased. Back in January we published a response from essa may ranapiri: “Kurangaituku allowed me to see myself within te ao Māori in a way I hadn’t before. Kurangaituku is unambiguously queer and perhaps ambiguously a woman and definitely a story-teller. There are so many scenes across this book that set a fire in me.”

The local It Memoir, absolutely gushed over in our recent review.

Another Ockham’s prizewinner rightfully starring in the bestsellers this week – Vincent O’Malley won the General Non-Fiction Award, and with it $10,000. Minor controversy: it was up against Charlotte Grimshaw’s memoir The Mirror Book and Patricia Grace’s From the Centre, which is like comparing oranges to a medium-rare steak, or maybe miso soup – that is, not particularly fair or logical.

You know the desire to self-improve isn’t just a summer fling when you buy Atomic Habits in May.

Think Romeo and Juliet-level romance and tragedy, but Romeo is a teenage boy living in Glasgow’s rough, working class housing estates, and so is Juliet.

9  The Palace Papers: Inside the House of Windsor, the Truth and the Turmoil by Tina Brown (Century, $40)

Linda Burgess is reviewing this one for us soon. “God I loved it. Are you loving it?” she emailed this morning, and oh yes, yes we are.

Following on from the bestselling Red Notice, Bill Browder’s account of a life (his own, that is) of being persecuted by Putin continues in Freezing Order. A terrifying, all-too-real thriller.

1  Everyone is Everyone Except You by Jordan Hamel (Dead Bird Books, $30)

A debut poetry collection which has earned red-hot-ember-glowing reviews from Aotearoa’s literary queens:

“Completely batshit, whip smart and spit-out-your-Tui or VB crack up … but mostly it’s full of heart and all the trouble the heart demands” — Tayi Tibble

“Jams the machinery of algorithmic life, makes toxic masculinity its sex toy and scripture its Netflix re-runs. Hamel is the captain of a new breed with deadly mouths, slick-as-hell footwork and heavyweight hearts. Jesus doesn’t love him but I do” — Tracey Slaughter

Hamel joins the formidable phalanx of local poets to have hit the top 10s hard over the last few months: Khadro Mohamed was #1 last week with We’re All Made of Lightning, Rebecca Hawkes’ Meat Lovers spent a good few weeks in the top three, Chris Tse’s Super Model Minority debuted at #1 and so did Francis Samuel’s collection, Museum. Yahoo!

Wellingtonians: please stop buying this book, so we can stop rehashing the same joke about you all loving Wellington and walking around.

The flip side of remembrance is forgetting, something that connotes not merely the absence of memory but often a conscious decision not to speak of particular events, a “disinclination to remember”, or a burying of secrets. Scholars have noted that there is a particular “art of forgetting” – a process involving the “deliberate, purposeful, and regulated” judgement about what, at a collective level, a nation, society or group wishes “to keep, and what to let go, to salvage or to shred or shelve, to memorialise or anathematise”. And it should come as no surprise that in making such calls, groups more often than not prefer to remember episodes thought to portray them in a positive light … An alternative approach to dealing with difficult histories might be to misremember them – that is, through distorted or false memories, including various myths, which in New Zealand have taken the form of beliefs that the country was colonised peacefully and long had the best “race relations” in the world.

No need to imagine: Imagining Decolonisation is here all week, every week.

The winner of the 2021 Booker prize, set in South Africa at the end of apartheid.

9  The Expectation Effect: How Your Mindset Can Transform Your Life by David Robson (Canongate, $37)

Taking a placebo, even when you know it is a placebo, can still improve your health.

Welcome to The Expectation Effect.

Thanks, publisher’s blurb, for bringing the drama.

The eldest Rooney offspring boomerangs back into the spotlight with the release of the TV series. The Guardian gave the show three stars out of five, with the headline “TV so slow it must be trolling us”, followed up with this: “Sally Rooney’s second TV adaptation is an aggressively uneventful affair stuffed with meaningful looks and strained silences. Why doesn’t anyone speak? Why can’t anything happen?”

Far better to switch off the telly and pick up a book of poetry.