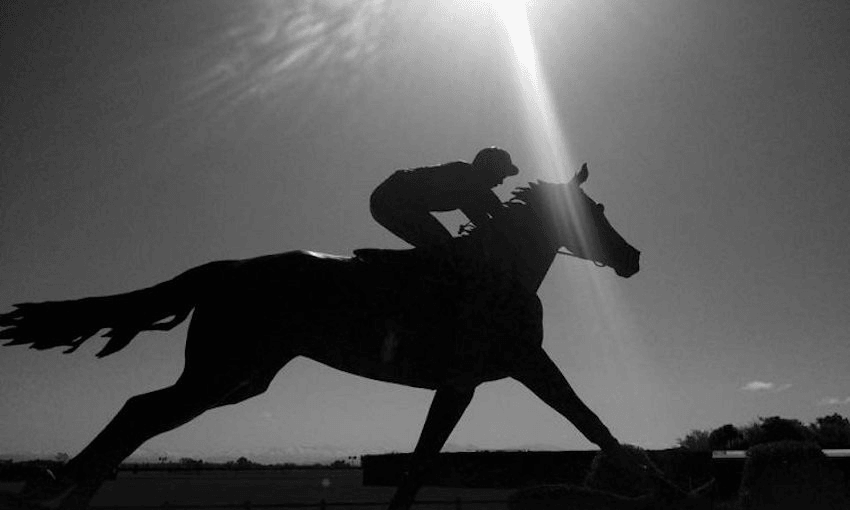 Book of the Week: Kelly Ana Morey’s action-packed love story with a horse in it

By Talia Marshall
Guest writer
Made possible by

I remember the Phar Lap skeleton at the old Dominion Museum off Buckle St in Wellington. He was in a glass case just after the Victorian settlers listless in their life-sized dioramas, and after the Egyptian Mummy, categorically the best thing in the museum apart from the stolen wharenui in the entrance gallery and the giant squid hovering above the maritime hall of wonders. As a kid I didn’t think much of Phar Lap’s skeleton, the skull in particular looked unlikely to have held together the long gracious head of a horse.

There is possibly some larger metaphor to be milked out of what became of this famous racehorse’s body in death, the skin flayed then turned into taxidermy, the heart sent back to his trainer Harry Telford, his soft tissue buried in America and the bones returned to the whenua of his birth, not for burial but exhibition. Divided like a pack of tarot cards three ways between continents his relics are still examined for signs of greatness. The horse everyone wanted a piece of. The massive heart that school children get to satiate their ghoulish appetites on when they’re taken to see all 14 pounds of it suspended in a jar.

But literary novelist Kelly Ana Morey plays things pretty straight in Daylight Second, her new book devoted to the life and times of Phar Lap. Her pragmatic, clinical intent is writing a highly readable novel about the rise and mysterious fall of an icon.

Phar Lap, a Thai name for lightning, was also called the generic Bobbie in a special, intimate way by his strapper Tommy Woodcock. I didn’t know what a strapper was before I read this, and though I’m still a bit uncertain, Morey has seamlessly blended the racing world of the 1930s and the language of the time into a detail-perfect period-piece.

Phar Lap was just a foal born on a stud farm in Timaru and then a smudgy colt that Harry Telford saw potential in when he shipped him off to Sydney as a yearling. Replete with warts on his nose, which Morey describes almost lovingly as proof of his ugliness.

Phar Lap died with his head in Tommy’s lap a few weeks after winning big in Mexico, aged five. But in between Timaru and Mexico there’s a lot of winning to be had, a lot of people happy over a horse thundering towards their glory, vaulting them across the dark, growing slick of the Depression era.

According to Morey, in November 1930, a year after Americans threw themselves out of buildings on Wall St, 75,000 people showed up to the stands of Flemington for the Melbourne Cup, not to win their dissipating fortunes back on a dead cert but to cheer on their collective hope and star. Morey makes it clear that if the 1920s had continued to roar, and the champagne had kept spilling, Phar Lap wouldn’t have caused so much animosity in the racing world, teetering as it was on the new austerity.

The book’s greatest strength is the action writing, and the entire middle section of the novel when Phar Lap starts winning. The drive-by shooting attempt days before the Melbourne Cup is a tour de force in building tension, and the description of the races Phar Lap wins are beautifully rendered. She captures not only the energy of the track itself, but also how amazing it must have been to be in the crowd and watch a huge horse beat the others with all that daylight between them.

They say it’s unwise to set historical fiction inside the head of a famous figure. And unlike some of the chapters of Jane Smiley’s Horse Heaven that even include the point of view of a horse having a near death experience from an operating table, we never really get inside Phar Lap’s head. We know the horse as others perceive him, in the regard they hold for him or the threat he poses. The ghostly foal at the beginning who becomes the growing projection of everyone else’s dream. Morey makes much of Bobbie’s even nature, the way he receives the adulation directed at him with curious pricked ears; she hangs the story on him but not necessarily through him, and strangely in doing so he becomes the most real character in the book, a proper human presence in a horse suit.

The way she has gently coloured in the lives of real people is rare and lovely, especially Tommy and his affinity for Bobbie, and Vi, Harry’s ambivalent wife, digging her unhappiness into the vegetable garden of her new, too-grand house.

One of the racing superstitions alluded to in Daylight Second is that it’s unlucky to have women in the stables. But no-one else could have written about the racing world the way that Morey has, and it’s got nothing to do with the meticulous research or lovingly described table settings from the 1930s. It’s the intuition she has for the inner world of animals and the way our humanness is revealed by them. This is not about a famous dead heart sitting in a jar after the curatorial fact, but a tender portrait of stable life and the people who had so much riding on a horse.