Jean M Auel unleashed her Earth’s Children series – and Jondalar’s manhood – upon the world 40 years ago. Megan Dunn, like many of us, discovered it in her high school library.

This essay is excerpted from Dunn’s brilliant new book, Things I Learned In Art School, in which she tracks her childhood, crappy jobs in a strip club and a steak house, her art career (she liked to splice Disney film clips with other media) and an obsession with Daryl Hannah. The essay appears in the book as “Other Video Artworks I Have Made with Daryl Hannah.”

The Valley of Horses still contains the best description of heterosexual sex I’ve ever read.

What more needs to be said?

As much as I love language, I concede sex is the one situation where I’ve rarely needed it. Little need to rock a metaphor, let alone cup a simile, and even less need for a full sentence with a bald full stop. In sex a groan will suffice and first names take on a tangy strangeness, if you can even get them out of your mouth.

Sex is an occasion often smothered by shyness – or it always has been for me. So it was with extreme shyness that I first fingered the spine of Jean M Auel’s The Clan of the Cave Bear in my high school library.

The library was organised by the Dewey Decimal System and raging with prepubescent curiosity.

The Clan of the Cave Bear. Ayla, an orphaned Cro-Magnon blonde hottie, is raised by a bunch of Neanderthals. She grows up, is better at maths than anyone else, is raped by Broud, the leader of the clan. Has his child, leaves the cave. Strikes out on her own.

The Valley of Horses. Ayla lives for a long time in a cave above a valley of horses, becoming incredible at everything. Her best friend is a giant mountain lion. Enter: Jondalar.

The Mammoth Hunters. Not sure, never read it. Pretty sure it involved mammoths though. 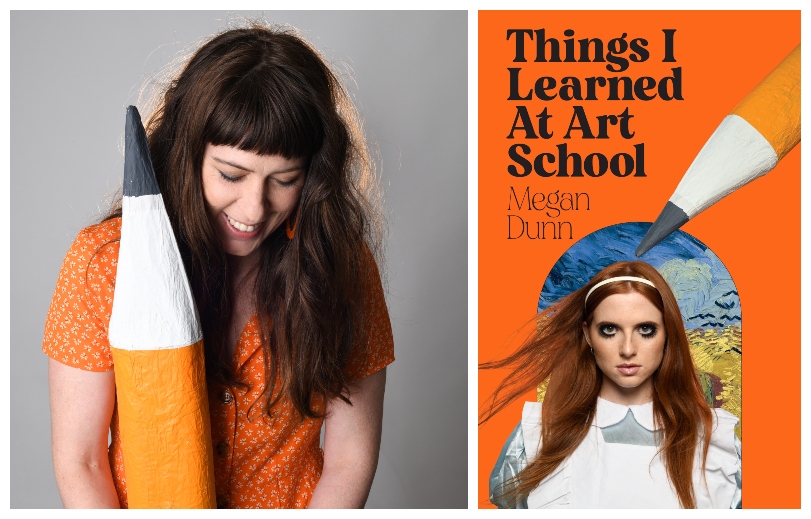 Megan Dunn, and her new book which has the most impressive blurbs we’ve ever seen (Photo: Supplied)

These first three books of the Earth’s Children series sat snugly side by side in our high school library. Each fat book was a bible of prehistoric possibility. Jean M Auel was a bespectacled lady in her mid-40s when The Valley of Horses became a sex bible for young girls. She knew a fuck of a lot about Jondalar. Her research into early sapiens civilisation was apparently also impeccable. I don’t doubt a second, closer read would yield a different haul. But at the age of 12, “Ayla, Ayla, Jondalar, Jondalar” conveyed more than enough. The heart and loins merged into a few choice syllables. The novels were recommended to me by other virgins desperate to know how to manipulate a manhood. Sexual Intercourse was like an upcoming exam and no one knew how to swot for it. Read a book? It all seemed ridiculous because it was.

Yet Jean M Auel wrote compellingly and at length about Jondalar and his manhood, which was also long. “Manhood” is a word I’ve never managed to say in public, let alone in private on the occasions when I’ve been intimate with one. It’s funny how much we laugh at Auel’s choice of diction given so few of us have better alternatives to hand. Dick? Too silly. Cock? Bit harsh. Penis? Why so formal?

The themes of the Earth’s Children series are mammoth: sex and death and civilisation at the very dawn of time. The cover art was also epic: the illustrator really captured the windswept savannah and the long tousled blonde manes of Ayla and Jondalar. He did a fine job too on the shaggy ginger coats of the mammoths. 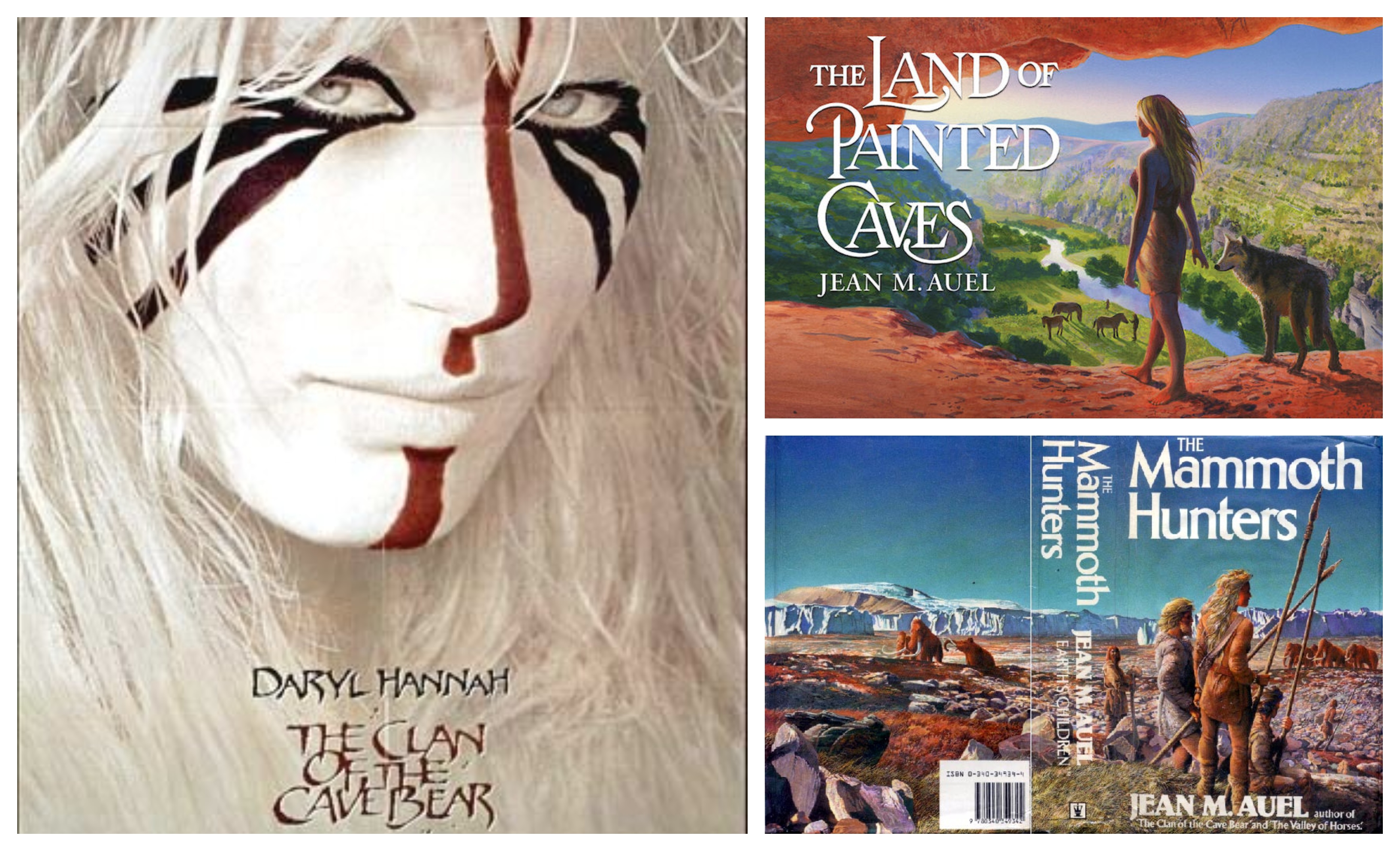 Daryl Hannah is looking at you; two of the very best covers of the Earth’s Children series – these are by Geoff Taylor (Images: Supplied)

The cover art was also magnificent.

Daryl Hannah’s face was smothered in white paint, red ritualistic marks striped her cheeks. Her eyes fiercely blue. She was the cavewoman every little girl wanted to be; the illustrated blonde from the book covers made flesh, and even better in real life.

The film, of course, was shit.

David and I sat side by side in the edit suite. Everything bad was good and everything good (like me) wanted to be bad. But I had to make an artwork to show at my next tutorial.

Director Michael Chapman made The Clan of the Cave Bear in 1986, and God only knows how Daryl felt about the final product. The film was mainly a vehicle to explore her tanned skin in a tanned hide, a costuming opportunity.

Her innocence – used so profoundly in Splash – was no less salient in The Clan of the Cave Bear, a feminist take on what it was like to hang out with Neanderthals. On screen, Daryl taught herself to count using stones, then did her slingshot target practice alone so Broud wouldn’t find out. Whenever he wanted sex he cupped his hands together and let out an abrasive grunt. (The Neanderthals didn’t talk; instead they used sign language.)

Daryl got down on all fours.

To David it was obvious why the film had bombed.

We can believe anything, but not a bad wig. They were deeply suspect. Broud had a brown shaggy frizzball of split ends.

Michael Chapman was a brilliant cinematographer. The view of the prehistoric savannah was as appealing as ever, especially with Daryl Hannah standing in it half-naked. But, Michael, that’s not enough.

The wigs; the guy on the right, or maybe the one in the middle, may or may not be Broud (Image: YouTube)

What I created that night in the edit suite wasn’t enough either. I had a new SVHS tape ready to go. I had found my formula, so I kept cranking out appropriated art videos. I thought of a film from childhood, rented it from Video Ezy and recut it into short outtakes. I often added a new soundtrack. My videos were admired by a group of about 15 people who drank cask wine at exhibition openings. They were an avid crowd, only too happy to dissect the subtext of mainstream films while feeling intellectually superior, usually on the basis of having created nothing.

I took a book of Donald Barthelme short stories out of my bag. It was time to introduce the father of postmodern writing to Daryl Hannah. My favourite Barthelme story was called “The Genius”. I had no idea what it was about, but it seemed to me that “The Genius” could meaningfully intersect with the Neanderthal trappings of The Clan of the Cave Bear. I narrated an extract into the microphone in the edit suite and recorded it over footage of Broud doing it with Ayla doggy style. But my formula didn’t work. I was as misguided as Broud – I could clap my hands together and gesture towards what I wanted, but somehow for me no sparks flew. Nothing happened. My video collage had no chemistry. I ejected the tape from the slot.

Ambiguity is not the aim of copulation.

It wasn’t clear to me then that I was trying to capture something that shy little book nerd from the library had wanted to see.

We’ve all grown up now, the first generation of little girls who read The Clan of the Cave Bear and The Valley of Horses. And we all have our online think piece to get out. “Everything I Learned About Love I Learned From A Cave Woman” is by Amanda Rea, who writes, “We want to know: will Ayla’s hole fit Jondalar’s pole?” The answer, dear reader, is yes. Other think pieces are more sternly intellectual and even corrective. In “Out of the Cave”, published on Slate, Tammy Oler writes, “It’s telling that Auel wrote The Clan of the Cave Bear at 40, after her career in business stalled out when she hit what she describes as a ‘glass ceiling’. Time and again, after Ayla is told women can’t do something, she does it anyway – better than the men. It’s easy to point out how over-the-top this depiction of girl power feels now, but this was an extraordinary representation of girlhood for the 1980s, especially for young female readers.”

Oler has paid way more attention to the novels than me. In fact, I suspect I may have only read the sex scenes. They are very fat books, and there’s now six in the series. Jean M Auel kept going, whereas I stopped and never went back. Oler makes many good points about Ayla’s rape in The Clan of the Cave Bear and how her sexual release with Jondalar in The Valley of Horses thus becomes a wish fulfilment for Ayla and her young readers. Oler concludes, “the true pleasures of The Clan of the Cave Bear are not in the sex we all think we remember, but in Ayla’s adolescent suffering and perseverance which makes her sexual awakening feel like such a revelation”.

But I think the critic Roger Ebert nailed it in his review of the film. “The ending of ‘The Clan of the Cave Bear’ emphasises its bankruptcy, because there isn’t really an ending, just a conclusion – a romantic shot of the woman continuing on her lonely quest. The great failure of the movie is a failure of imagination.”

I don’t have an ending either. But I do have a conclusion: I had no idea what I wanted to say about The Clan of the Cave Bear when I was in my early 20s. Whereas I now know there’s only one thing I can say: Ayla, Ayla, Jondalar, Jondalar. In sex, as in art, there is no formula. But there is Daryl Hannah.

Things I Learned At Art School, by Megan Dunn (Penguin, $35) is available as an ebook via the publisher, and once we’re out of Level 4 it will be available from Unity Books Auckland and Wellington.