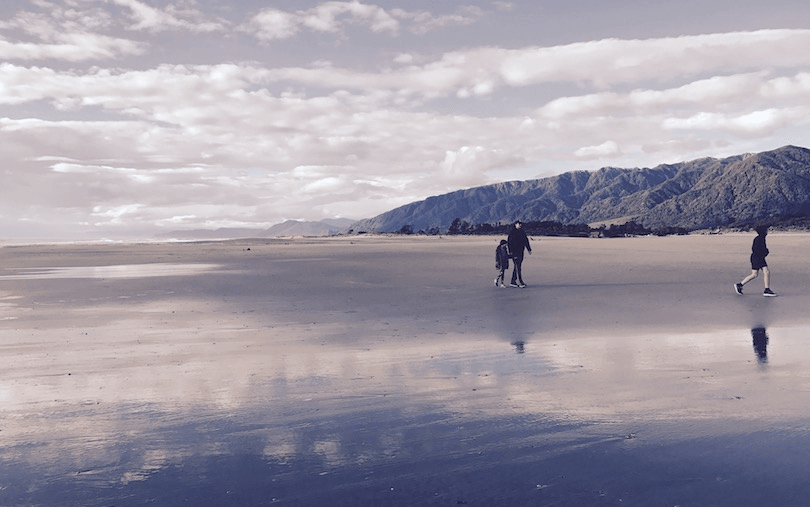 Becky’s family on the beach at . Photo: Becky Manawatu.

By Tayi Tibble
Guest writer
Made possible by

Becky’s family on the beach at . Photo: Becky Manawatu.

She kisses him goodbye with her eyes still wet and alight from their last swim in the Awatere river. At the train station celebration, she leads the Kapa Haka but her voice keeps breaking under and over itself like waves. Like last night, on the riverbank, between the moss and the baby’s-breath, where he had kissed her sticky until she cried out from her chest. And she was thinking about the rolls of white fabric her sister kept in the shed and how she would make a dress pressed with shiny bits of shell. She could even fix a veil from the weave of a fishing net or wear knots of pale hydrangeas like a crown upon her head. Then together they would move to the empty plot of ancestral land forgotten by the sea and have little brown babies that she would make sure to stuff fat with potatoes and wobbly mutton. And her children would slurp kina in the summer. Collect driftwood for the fires on their way home from school. And their father would take up a good job in Gisborne. Return home, with sacks of boiled sweets and powdery jam-filled treats, and maybe, on special occasions, a European perfume or powder that she would keep but never use. And already she could smell the florals and the meat. Feel them turning inside her. Sensations so visceral that she cried out from her chest but when the sun lit the day and the train started pulling away, with every salute, march and funeral wave farewell she felt the world changing. The lump in her throat swelled like the seas that threatened to take him from her, and she had to swallow hard. But she promised that every day she would be the first to check the mail and that was the only vow she took.

First published in Landfall and reprinted with permission.