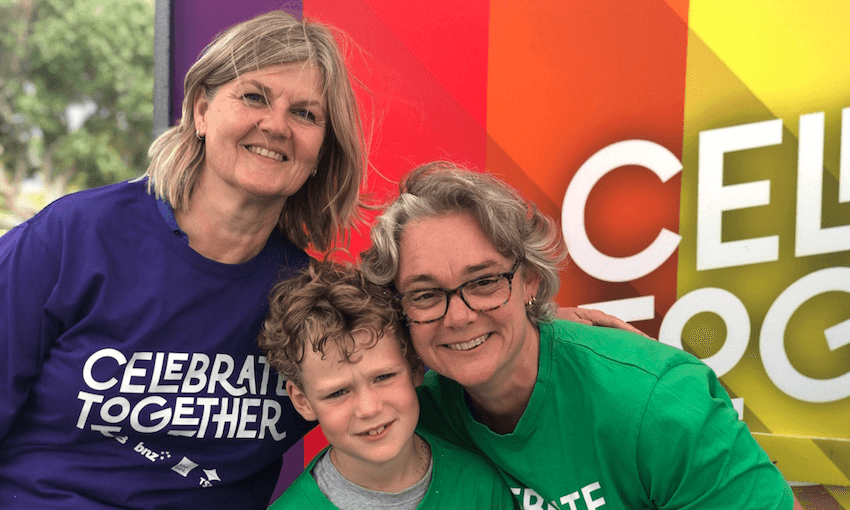 Liz Knight, the chief risk officer at Kiwibank, and her family at Out in the Park, flying the Kiwibank flag. (Photo: Supplied)

Not about the party, but the dance: What the Rainbow Tick means for Kiwibank

Liz Knight, the chief risk officer at Kiwibank, and her family at Out in the Park, flying the Kiwibank flag. (Photo: Supplied)

Acceptance isn’t a state of being, it’s an action. It’s not a casual nod to a stranger on your walk, it’s a handshake. You know, back when we could do handshakes. Acceptance is one of the pillars of the Rainbow Tick, a nationwide accreditation that acknowledges organisations that are committed to diversity and inclusion of LGBTQ+ communities.

“It wasn’t always this straightforward. I grew up in Western Sydney, where even last year my home electorate produced only a 38% ‘yes’ vote to gay marriage, so it clearly hasn’t moved on from the ’80s when I was a teenager,” she says.

“My formative years were full of clear messages that [being gay] was not OK here, so as soon as I could, I left and never went back.”

Knight would work in finance in Australia for several years, before ending up in breezy Wellington as Kiwibank’s chief risk officer.

At Kiwibank, Knight has found an environment that differs wildly from the one she knew during her formative years in the Sydney suburbs. The New Zealand-owned bank has a Pride Network that is open to everybody, and employees have rainbow pins to identify themselves as allies and advocates. Policies and processes are in place to handle any issues of prejudice or discrimination, and new buildings are designed with inclusion and accessibility in mind, including genderless bathrooms. This is supported with an active storytelling culture within the company, including an intranet where employees share their stories with others in the company’s rainbow community.

“I heard from many people saying thank you for sharing my experiences out loud, and especially from many parents of rainbow children who were proud of Kiwibank,” says Knight.

The Rainbow Tick was established in 2014, based on the rationale that reduction and prevention of discrimination against LGBTQ+ people in the workplace will in turn lead to improved health and wellbeing for LGBTQ+ New Zealanders. The mission is to challenge heteronormativity and cisnormativity in the workplace, and contribute to a New Zealand where everybody can live free from discrimination.

After attaining the Gender Tick last year, Kiwibank has been working with Rainbow Tick since July to meet the organisation’s standards. The accreditation was attained two weeks ago, and Rainbow Tick specifically highlighted Kiwibank’s active rainbow employee network and their unequivocal support of LGBTQ+ communities.

On a practical level, the Rainbow Tick accreditation is an acknowledgement that the organisation has met standards in five key areas: strategy and policy; staff engagement and organisational support; external engagement; organisational development; and monitoring. Essentially, that means upholding the mana of LGBTQ+ people not just on a day-to-day basis, but in the long-term planning and organisational structures that make up the company.

It’s not just about employees, though. Knight says the Rainbow Tick is just as much for the customers.

“It’s a public marker that measures our culture as well as our supporting processes and lets people know they are OK to be themselves here… our people need to be representative of our customer groups and communities around New Zealand.”

The concept is simple: if an employer isn’t treating their employees fairly, and failing to prevent discrimination in their own workplace, how could they offer that to their customers? If you’re an LGBTQ+ person, why would you put your money with a company that has no interest, active or otherwise, in preventing discrimination against your community?

But what does a Rainbow Tick organisation actually look like in practice? The tick means nothing without actions and systems in place to maintain it. To Knight, it means that it is OK to be herself at work, and if she is made to feel otherwise, knowing there’s support for her.

“It also means our leaders, allies and advocates have attended workshops to help them understand what it might be like to be a member of the rainbow community.”

The Rainbow Tick isn’t just about tolerance – it’s much more than that, Knight says. It’s about acceptance – about acknowledging, even celebrating the active rainbow community in a workplace

“It’s also something to be proud of, that your employer values diversity and practises inclusion. In simple terms, it means you can speak openly and safely about your family, your household, your holidays and weekends.”

The Rainbow Tick recognises organisations that are meeting standards of inclusivity for LGBTQ+ people, but it also holds them to account. Knight has a great analogy for what that means: “You can invite people to the party, but inclusion is about asking them to dance.”