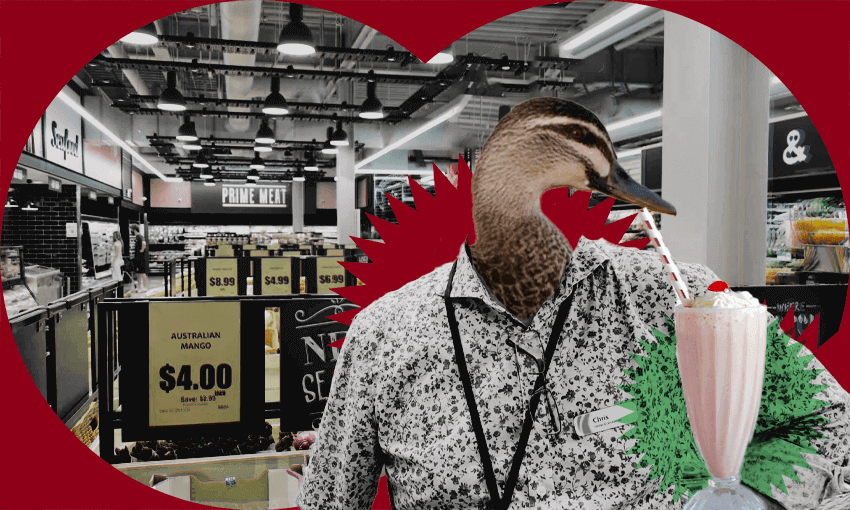 How the lovely supermarket man milkshake ducked in record time

Chris Harris was a social media darling who crossed over into wildly popular mainstream posts thanks to his immense dedication to his new supie. Then the comments turned.

It was the Facebook equivalent of SEO-bait. Community groups are hotbeds of break-in reports, complaints about change and heartwarming stories of nice things happening. The story of a 70-year-old supermarket owner battling to make ends meet had all that in abundance.

Chris Harris shot to fame after multiple posts by his daughter Sarah went viral, and prompted a wave of sympathetic media coverage. He started the day on RNZ’s First Up, and was featured across all the main news sites, typically cast as a battler trying to do right by his customers in a harsh commercial environment. The Spinoff covered it too, affectingly detailing the epic work hours and even more epic (six years!) struggle Chris Harris endured before opening Fresh Choice Greenlane. It was “his dream for years”, according to his daughter Sarah, who did acknowledge that it was a somewhat bizarre dream.

In all the coverage he came off as a deeply affectionate character, with some cool niche slang, saying that when he lost $25,000 last week that it “directly comes out of my wazoo”. He typified that older generation who shame us with their effort, pitching in on everything from cleaning the toilets, to making coffees, to disappointing his Lotto customers and stocking shelves. This work ethic was, he said, forced upon him by the current labour market. “Staffing-wise it’s complex,” he told Stuff. “You might have five people lined up for interviews and none of them turn up, then the ones that do aren’t the pick of the crop.”

The story shone brightly as a feel-good, never-too-old archetype for a matter of hours, before it milkshake ducked with astonishing speed. The concept of the milkshake duck is almost as old as Harris’s plans for Fresh Choice Greenlane, emerging in 2016 when Australian cartoonist Ben Ward created a fictional duck that goes viral for drinking milkshakes before being revealed as a racist.

It has come to encapsulate the seemingly inevitable disappointment that follows any regular person who goes viral before just as quickly having some problematic element of their past revealed. It’s become a very familiar sensation, representing a kind of iron law of internet physics, with famous examples including Ken Bone, whose cute cameo during a presidential debate presaged a reveal of his bad times on Reddit, or Florida Hot Cop, who was later exposed as an antisemite.

What makes Harris’s milkshake ducking specific and noteworthy is that what was problematic about him was directly linked to his plight. Commenters on The Spinoff’s story described him as “arrogant”, a “terrible employer”, with multiple former workers calling him racist. One went as far as to memorably say “this man is the worst man I have ever met”, which is quite bad. The cumulative effect was to cast his inability to find and retain good staff in a quite different light.

(Less classically problematic but almost more brazen was the revelation, somewhat buried in coverage, that he already owned one supermarket – another Fresh Choice, a brand owned by Woolworths – in Half Moon Bay. The fact Greenlane was his second significantly changed the complexion of the story – dreaming of owning one supermarket is charming. Dreaming of another across town, much less so.)

By the day’s end Harris was the New Zealand internet’s main character for all the wrong reasons, and his daughter’s effort to drum up business had worked for a matter of hours before his name became synonymous with all that is viewed as rough and rapacious about his industry. It was as if we as a nation briefly set aside all we normally believe about supermarkets in fawning over this seemingly lovely old man. When his loveliness fell away in a hail of devastating social media comments, we remembered how we really feel about supermarkets.

Which is to say that we use them grudgingly due to the very limited array of alternatives. That they earn around $1m a day in excess profits. That even when they announce price freezes they are actually a way of gaming seasonal price fluctuations in their favour. That even owning a single supermarket can make you enough money to buy and fund a successful professional sports franchise.

Or a second supermarket. Forty-eight hours into Chris Harris’s hype cycle he has completed a quite singular type of milkshake duck, in that not only has he been revealed as a much more complex figure than he initially presented, but that what he rose to fame bemoaning might well be a direct result of his own personality and behaviour.

Fresh Choice Greenlane, briefly the most famous supermarket in New Zealand, is unlikely to find it any easier to recruit staff with its new SEO reality. It’s an odd little episode in the dance connecting community groups with our media – they’re an irresistible source of stories for journalists, but perhaps this episode serves as a cautionary tale that every ostensibly low-risk, low-stakes and feel-good yarn has risk attached. It also serves as a cautionary tale to those who would seek coverage for their beloved dads: make sure you know exactly what kind of a boss the dude is before you hit publish.