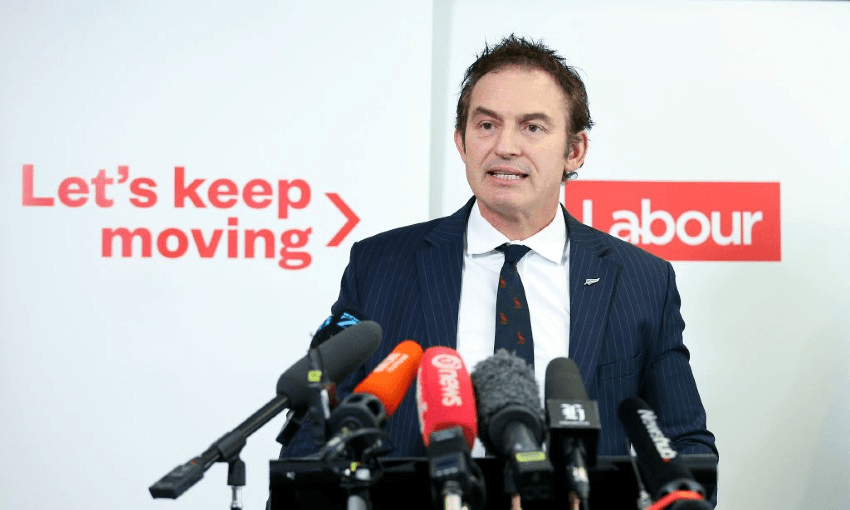 Stuart Nash on US military satellite launch in NZ: ‘I have not received an application’

A controversial Rocket Lab mission designed to improve US military targeting capabilities is slated to launch from the Mahia Peninsula next month, but Stuart Nash says he’s yet to approve it.

Update: On 22 February The Spinoff reported that the Minister has now approved the Gunsmoke-J satellite for launch.

The minister responsible for New Zealand’s space regime has yet to sign off on a controversial US military satellite, which Rocket Lab announced yesterday it would launch from New Zealand next month.

The experimental Gunsmoke-J payload, which belongs to the US Army’s Space and Missile Defence Command (SMDC), is designed to improve US military targeting capabilities, as The Spinoff reported yesterday.

All satellites launched from New Zealand must be signed off by the economic development minister who is currently Stuart Nash. But as yet, Nash has not received an application for the controversial satellite, even though officials have been assessing it for at least three months.

By November last year, an application for the Gunsmoke-J was already under “active review” by NZ Space Agency staff. And in January this year, the agency again told The Spinoff the payload was “still under active review by officials and ministers”.

But the most important of those ministers has yet to receive an application, he told The Spinoff.

“I have not received a permit application for the payload referenced in Rocket Lab’s announcement today. Once I receive the application I will make a judgement on whether to grant or deny the permit, based on advice from officials,” Nash said yesterday.

Nash declined a request for an interview on the subject, and would not say whether he has been consulted on the application or has concerns about its payload.

Under principles agreed by Cabinet late in 2019, approval will be denied to payloads that contribute to nuclear weapons programmes or support military operations ”contrary to government policy”.

Given the satellite is yet to be approved, The Spinoff asked the Space Agency whether it had coordinated with Rocket Lab around the timing of the announcement. Agency head Dr Peter Crabtree said: “An application is in train.”

“It’s common for missions and payloads to be announced prior to payload permitting, as that process is often completed closer to the opening of a launch window,” Rocket Lab head of communications Morgan Bailey said.

“Rocket Lab aims to provide as much notice and information as possible about upcoming missions in advance, which means often payloads are still undergoing permitting processes.”

The timing of sensitive launch announcements has previously been a cause of tension between Rocket Lab and the Space Agency.

In January last year, Rocket Lab privately condemned the agency’s decision to announce a mission for US spy agency the National Reconnaissance Office only 10 days before the launch was scheduled.

“Rocket Lab does not agree with the New Zealand government on this decision to go late and we do believe that this will cause long lasting damage,” a company staff member wrote in an email to the agency, released under the Official Information Act.

Rocket Lab has ‘put itself into the kill chain’

Rocket Lab has repeatedly maintained that it will never launch weapons.

The government’s criteria “to protect the national interest”, released in 2019, rule out payloads that “contribute to nuclear weapons programmes or capabilities” or that have intended end uses that support or enable “specific defence, security or intelligence operations that are contrary to government policy”.

It remains unclear whether contributing to US targeting capabilities falls under that criteria.

A security expert says there is little meaningful difference between launching a weapon and launching the technology to help target weapons.

“From the moment of decision to the moment of strike, you have something known as the kill chain,” said Paul Buchanan, an independent security expert and former US defence and intelligence policy analyst.

“At the pointy end, the kill chain involves some sort of kinetic action that eliminates the enemy. But the kill chain begins with intelligence gathering, which then is turned into targeting matrixes,” he said.

“This satellite is another step toward the pointy end of that spear. Rocket Lab has put itself into the kill chain.”

The Gunsmoke-J is an experimental rather than operational satellite, meaning it is unlikely to actually collect targeting data for use in current US Army operations. But Buchanan suggests this is a distinction without a difference.

“Why would you experiment and trial technology if you didn’t plan on using it? They’re so far down the path with Gunsmoke-J that there’s very little discernible difference between what they’re doing right now and what they’re going to do in five years.”

While the minister is formally yet to approve it, Rocket Lab’s announcement of the launch risks pre-empting the minister’s approval, said Buchanan.

“A lot of money has been spent and the US Army has openly talked about using the Mahia Peninsula as the launch site. So it’s a done deal. Any delays, any political interference with the launch schedule, is going to be looked very disfavorably by the current clients and future clients. Even if he’s saying he hasn’t made a decision, the decision clearly has been made.”

Buchanan says the Gunsmoke-J is another sign that the Mahia Peninsula could become a target in a time of conflict.

“If that Mahia Peninsula launch site doesn’t have a target on it already, it sure is about to acquire one,” he said.

“Let’s say US adversaries that are about to be targeted by these platforms have the capability to retaliate, I would think that one of the targets for their retaliation would be booster sites.”

In a 2019 op-ed written in response to similar concerns, Space Agency head Peter Crabtree sought to reassure the public about the New Zealand space regime, saying it was “wholly committed” to the safe, secure and peaceful use of space.

“Full disclosure is required from all applicants and this is non-negotiable. We are absolutely confident that our applicants are open and honest about the information they provide to us, and in our ability to verify that information,” he wrote.

“We have a system that allows us to assess each application on its merits. Have we received and approved payload applications from defence agencies? Yes we have, because to date these payloads are consistent with New Zealand’s national interest.”

In response to the announcement of the Gunsmoke-J launch, the Green Party yesterday condemned Rocket Lab’s role in launching US military and intelligence satellite launches from New Zealand.

Activist group Peace Action Wellington said today it views the Gunsmoke-J as a “direct contribution to the US military’s weapons capability”.

“New Zealanders have no power in how that capability is used, on whom or for what purpose. Improving ‘targeting’ capabilities so that the US can better drop bombs on Afghan weddings or kill Yemeni teenagers with drone strikes is not something New Zealand should support,” said Valerie Morse, a Peace Action Wellington spokesperson.

“This past week, revelations that Air New Zealand has been assisting the Saudi military have resulted in quick action to end that contract. Yet, the Accident Compensation Corporation is a co-investor in Rocket Lab along with Lockheed Martin, the weapons company that has reaped the greatest profit from the war in Yemen. It is a double standard.”