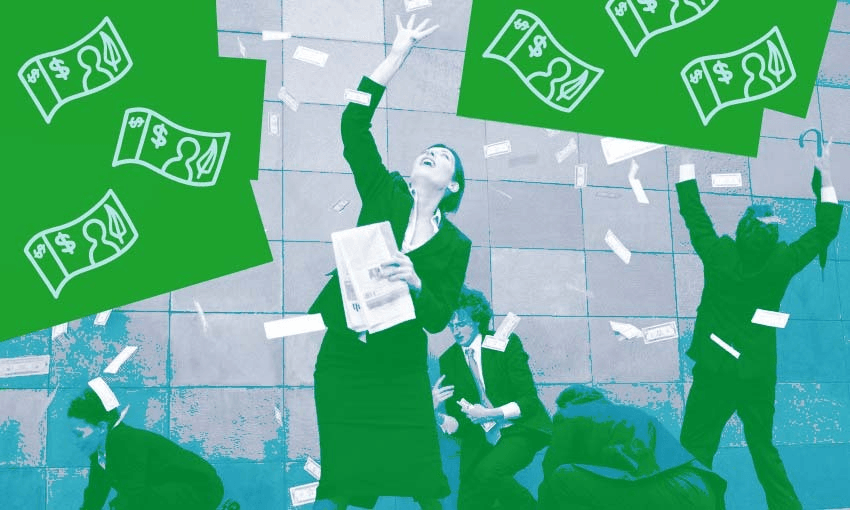 The richest saw their wealth soar during the pandemic. Was there a different path?

Ever since central banks saved the world from ruin in 2008, each economic challenge has been met with the same solution. It works – but also ensures the richest get even richer.

As with most workplace interactions over the past few months, it happened on Slack. A colleague noted that “billionaire wealth increased 55% during the pandemic”, which prompted appropriate emoji reactions: one facepalm and two vomits. The stat concerns US billionaires, and came from a thinktank. It was somewhat cherry-picked, taking the bottom of the March 2020 market crash and the booming market rebound which sustained through April 2021 (and has continued since). Even so, it is fundamentally accurate: during the hardest year for the world in most people’s living memory, the wealth of the wealthiest surged.

This happened in the US, mostly under Trump. Surely here in Aotearoa, with our left-leaning government in charge, things were different? Well, no. Taken from the bottom of the March 2020 crash through to the January 2021 peak, the NZX50, which tracks our largest publicly-traded firms, rocketed up 47% – though it’s not extravagantly above its pre-pandemic peak, unlike the S&P500. Still, on a more granular level it appears to be true here too – Bernard Hickey analysed various publicly available data sources and came out with a 50% increase in wealth for the richest New Zealanders.

This happened all over the world, and was – with the benefit of hindsight – entirely inevitable. When the cataclysmic events of the early stages of the pandemic came upon us, governments around the world mostly did two things. First, they asked their citizens to stay indoors to slow or halt the spread of the virus. Second, to avoid the economic carnage that went along with mandating the closure of many businesses, they instituted an array of economic measures to try and keep jobs in place and the financial system intact while that happened.

The money stuff came broadly under two umbrellas. One is known as fiscal policy, like our wage subsidy – government spending which goes directly to people or organisations. The other is monetary policy, wherein central banks reduced borrowing costs to almost nothing, allied with techniques like quantitative easing, which aim to increase the amount of money available to banks, and thus keep the economy from seizing up while on ice.

This was all done in the name of preventing a recession. And it makes sense – recessions are really bad! When they happen, thousands of people lose their jobs, businesses and sometimes whole industries can close down. Those rendered unemployed might spend months or years on benefits, which will impact their health, sense of self-worth and general ability to fully participate in life. For politicians, recessions are particularly freaky, because they’re strongly correlated with lost elections – so along with their constituents, they too often lose their jobs.

What happened with the rapidly-deployed economic response to Covid-19 and the lockdowns? Broadly, it worked. The whole world got through this existential challenge with much less economic pain than was anticipated. In fact, some seemingly unsolvable problems got better for the first time in decades. Poverty dropped by record margins in the US. Hybrid working caught on in a major way, reducing time in commutes and making work more accessible for some. Here in Aotearoa we have unemployment at 3.4%, matching a record low. Even after the epic Auckland lockdown which began in August of 2021, the life support system applied to business seems to have done its job, with relatively few major failures reported.

This means that while the health response to Covid-19 will be judged harshly in many countries, the economic response is largely seen as a very positive story, with no version of deep recession and slow, halting recovery which followed the GFC in 2008-2009. Which all sounds great – until you remember the billionaires.

The tool above shows median house prices for every suburb in New Zealand as at September 1, 2021, plus the year-on-year change.

Is the cure the disease?

What this boils down to, then, is a sense of dissatisfaction that when things go badly for all of us, the only way we fix things unavoidably makes the richest people richer still, outpacing the wealth increases of the middle class, let alone those in poverty. Was there a way of saving the economy that made Aotearoa’s less well-off wealthier instead? Could we have engineered the inverse of what we saw and have our billionaires stand still, while the bottom half rose?

Hickey addressed that in the Kākā this week, suggesting that had the government taken its recovery fund and distributed it directly to taxpayers, rather than filtering it through the wage subsidy to impacted employers and various other approaches, there would have been enough for a very significant sum: $10,000 per person.

This is not as far-fetched as it sounds: the concept is sometimes known as helicopter money, and versions of it were part of the post-pandemic response in the US and UK. The downside is that by not tying money to the maintenance of people’s jobs, you can get the kind of jaw dropping unemployment numbers seen in the US, where as many as six million filed for unemployment in a week. While many of those jobs have come back, it’s still some way off where it was pre-pandemic. It’s chilling to think of what has become of those people in a country with such a thin social safety net.

That said, giving $10,000 to everyone would be an unprecedented economic event. When plugged into the shipping and supply chain issues we’ve witnessed over the last couple of years, it’s easy to imagine the apocryphal empty supermarket shelves becoming a reality, and spread across many sectors of retail, leading to even more inflation than we are currently wrestling with. However, were it to be spread out over a longer timescale it might not have proven as problematic.

Researcher Max Rashbrooke is the author of Too Much Money, a new book subtitled “how wealth inequalities are unbalancing Aotearoa”. He believes that while the wage subsidy was effective at combating income inequality, other policies increased the kind of wealth inequality which saw billionaires particularly enjoy these past two years. He believes this could potentially have been clawed back with a one-time windfall tax – but says that any mention of tax has been rendered politically unsaleable in New Zealand, even for a Labour government.

If we had to do it over again

In some ways the economic response to the pandemic can be understood as what the New York Times recently called a memory of “the last war”. The period after the GFC in 2008-09 was characterised by “​​a series of chronic, interrelated problems: too little spending by consumers and businesses; too few jobs; and too-low inflation,” economics correspondent Neil Irwin wrote. “The result was an economy that functioned below its potential for years, with grave human costs.” We fought this very different catastrophe using much the same tools, and as a result saw some undesirable inequities.

That said, even in this wildly unequal outcome, there are signs of lessons being learned. The introduction of a form of unemployment insurance could blunt the impact of future economic downturns by preventing the temporary loss of a job from becoming a personal catastrophe – and potentially lessening the need for a wage subsidy. Housing consents are running at record levels, which brings with it the promise of a contraction to house prices and rents – something which, after years of prevarication, even the prime minister admitted was desirable just yesterday. The Reserve Bank is starting to stir too. In the face of runaway house prices and steeply rising inflation it has raised interest rates twice in recent months, and signalled it will continue to do so.

It all adds up to a sense that an end could be in sight for this long, strange period of shrugging acceptance that the only way we can protect low income people is with a tonic that makes asset prices – and in New Zealand, that really means house prices – escalate endlessly. And therefore increases our pre-existing inequalities.

The promised land is, of course, getting the good times of business prosperity, low unemployment and higher wage growth, without the bad times of inflation, inaccessible house prices and rents that eat up every pay rise. But if there is a way to more effectively share the wealth while still protecting people from the horrors of recessions, then perhaps this K shaped recovery will have been worth it after all.