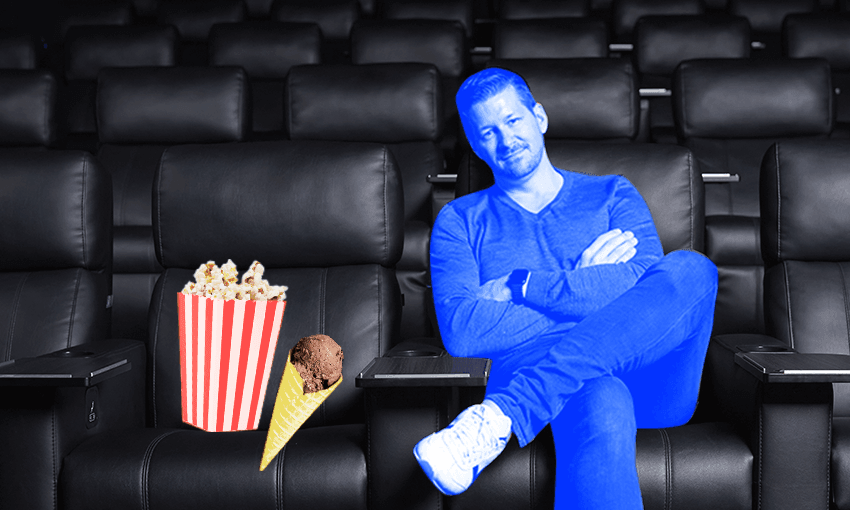 ‘We’ve sold out every session’: How Silky Otter is bucking cinema trends

While some movie theatres have struggled to keep their doors open through the pandemic, one new chain has been busy opening new cinemas.

Neil Lambert knew his timing was terrible. In October of 2019, he opened a brand new two-screen movie complex in the Auckland suburb of Ōrākei, one that came with a simple concept: he and his backers wanted Silky Otter to reimagine cinematic experiences in places where theatres had never been before.

That meant malls were out, and the suburbs were in. So were downsized screens, smaller theatres, and bespoke food and drink offerings, including a fully staffed kitchen available for those after a catered night out, complete with cocktails, dinner and dessert.

That means popcorn chicken, smoked salmon pizza, sticky date pudding and tap beer delivered to your chair. “A lot of cinemas, especially in the regions, haven’t been updated [in decades],” says Lambert. “We want to [deliver] this better experience.”

Five months after opening, the pandemic hit. Cinemas up and down the country shuttered as people turned to streaming services at home to pass the time. Major movie franchises postponed films or sent them directly to streaming. As box office takings dropped by as much as 70%, some theatre chains saw the writing on the wall and closed their doors for good.

But it was too late for Silky Otter. Ōrākei was already open, and Lambert had signed construction deals to expand the chain to the Christchurch suburb of Wigram and Richmond near Nelson. “Everyone was shouting … ‘Maybe you guys should stop,’” he says. “We were too far down, and we believed we could bring it back.”

That belief came from an “unwavering faith” in the industry. Lambert, 47, grew up in an age when blockbusters dominated and going to the movies at the weekend was pretty much a given. Despite the numbers saying otherwise, Lambert refused to believe those glory days were over. He believed cinemas simply had to evolve to cater for customers like him who remembered cinema’s 80s and 90s peak, but now wanted a different experience. “The world has moved on,” says Lambert. “I want a glass of wine, a hospitality experience”.

Silky Otter was designed to provide exactly that. Every auditorium has a maximum of 47 seats, huge leather chairs with plenty of leg room. While Event and Hoyts offer similar premium options like Gold Class, film-goers are often charged $40 or more for that experience. Lambert wanted to offer the same thing for an everyday price. (Tickets at Ōrākei are $22.50, and $19 in Christchurch and Richmond.) Why? “We want you to come more regularly.”

So, despite the bleak box office forecasts, he ploughed on. The Wigram complex opened in Christchurch in July 2021; two weeks later, the country again went into lockdown. Still, he refused to panic. Lambert’s backers and construction partners continued to support him. “I don’t know whether that strengthened belief, or [we had] a little bit of crazy,” he says. “We just kept pushing.”

His resolve hardened watching movie studios discover streaming wasn’t delivering the returns needed to create blockbuster films. “They didn’t make the money that they’d hoped,” he says. “What they learned is that they need cinemas to create a zeitgeist [moment].”

“We’ve sold out every session. Demand’s been off the charts,” says Lambert. He helped out on the candy bar and watched faces closely as fans emerged from screenings. “They were smiling, saying, ‘The seat, the screen, Tom Cruise flying a jet, it doesn’t get any better.'” It is, he says, “why we do this”.

Yet, he’s not out of the woods just yet. Trend reports suggest cinema’s future may rest on the shoulders of millennials, who have flagging interest in theatre-going. Others suggest tiered pricing models to bolster interest in smaller indie fare might be needed, as well as theatres pivoting to offer other services like TV shows or gaming on the big screen. (Silky Otter offers both.)

There could still too be more twists and turns in the pandemic to play out. Lambert is well aware of all of this. But he remains hopeful. He has to. In late October, he’s opening another four-screen complex in Auckland, behind the Ponsonby Central food court. Then, next year, there are concrete plans to open Silky Otter theatres in Takanini and Queenstown.

Some of that “little bit of crazy” might need to be kept in reserve. But Lambert points out the upcoming pipeline of blockbuster films – including Jurassic World Dominion, Lightyear, Elvis, Minions, Thor and Avatar 2 – as reasons to stay upbeat about cinema’s future. “The pipeline is full,” he says. “I knew movies would come back.”