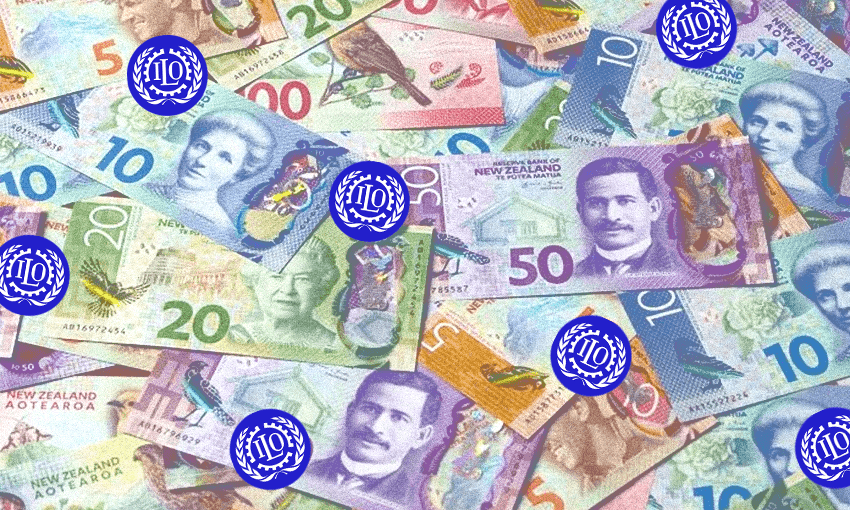 Why everyone’s so mad with BusinessNZ over fair pay agreements

The business lobby group has been roundly criticised for playing fast and loose with the truth about the new Fair Pay Agreement law – and over the results of its attempt to have a UN agency intervene. Jacob Flanagan explains the story so far.

After BusinessNZ met with an indifferent response to its complaint to the International Labour Organisation over Fair Pay Agreements earlier this month, workplace relations and safety minister Michael Wood called the lobby group’s actions part of an “active misinformation campaign” against the new law. The strength of his language reflects frustration within government and labour organisations over BusinessNZ’s claims, which many FPA supporters say have been, at best, misleading and hyperbolic; at worst, outright false.

So are the critics right? Is BusinessNZ? Here’s how we got here, and what’s coming next.

Fair pay agreements: remind me what those are?

A bill currently wending its way through parliament is set to introduce a new system of Fair Pay Agreements, or FPAs, to New Zealand. These are legally binding documents, agreed to by employees and employers, setting out minimum pay and conditions across a sector – for example, all nurses might be under one FPA. Similar minimum employment standards are commonplace in Australia and Europe.

The bargaining process can begin if at least 10% of a workforce or 1,000 employees agree to begin an FPA, or if it’s in the “public interest” to do so, such as in low pay industries.

Next, the proposed FPA needs support from a majority of employee and employer voters – employers receive one vote per covered employee. If the vote fails, parties go back to bargaining, before voting again.

If a second vote also fails, or if the parties can’t agree, the Employment Relations Authority decides the terms of the FPA.

FPAs were first recommended in 2018 by the Fair Pay Agreements Working Group, chaired by former National Party prime minister Jim Bolger. The group’s report found that “wages in New Zealand have grown, but much more slowly for workers on lower incomes than those on high wages; and they have grown more slowly than labour productivity”. The report argued FPAs could boost low pay, while ensuring “good employers are not disadvantaged by paying reasonable, industry-standard wages”.

Right. But what’s international law got to do with it?

The International Labour Organisation (ILO), the United Nations agency in charge of employment rights, meets every year with governments, employers and workers to promote fair work conditions. Because New Zealand has agreed to many of the ILO’s conventions promoting things like banning child labour, our legislation is obliged to comply with them.

One of the many pieces of legislation from around the world examined at this year’s meeting was the government’s FPA bill.

Sign up to Stocktake and go in the draw to win one of three prize packs from Fix and Fogg – one of our favourite business success stories. Two subscribers will receive a six-month supply and one lucky winner a full year’s supply of Fix and Fogg’s delicious nut butters.

And BusinessNZ said we were on the ILO’s naughty list?

Last month, BusinessNZ released a statement claiming that “The International Labour Organisation has included New Zealand on the list of the 40 worst cases of breaches of international labour treaties”.

“The fact New Zealand was included on a list bookended by Afghanistan and Venezuela and just ahead of Nigeria showed just how flawed the proposed FPA Legislation was.

What? New Zealand is one of the worst 40 countries for labour laws? Our worker rights are nearly as bad as Nigeria, where child slavery is common? This sounds terrible!

Or would do if it were true. As has been widely reported, BusinessNZ misleadingly edited the title of the ILO’s report.

The ILO did not publish a list of the 40 “worst case breaches”. Instead, they published the much more boringly-named “Preliminary list of cases as submitted by the social partners Committee on the Application of Standards” – in other words, the list of nations the ILO were going to meet with.

New Zealand was only on that list because BusinessNZ campaigned for them to be on it, and only “just ahead of Nigeria” because the list was ordered alphabetically.

Council of Trade Unions (CTU) president Richard Wagstaff explained that “being on the shortlist does not in any way indicate the ILO does not support the creation of FPAs in New Zealand”.

So when NZ went to the ILO, what did the ILO say?

OK, we’re about to get into the sometimes dull world of international labour law, so stick with me here.

BusinessNZ had convinced the ILO to examine New Zealand’s FPA bill at their meeting. The ILO looked at the bill, and published this:

It was a very short statement, essentially just reminding the government to continue working with employers and workers, and to keep the ILO informed of progress.

For context, if we were to compare the ILO’s response to Aotearoa with, say, Nigeria (as BusinessNZ misleadingly did); the Nigerian government was advised to “without delay” review whether men and women were paid equally, ensure everyone is receiving at least minimum wage, and stop the policy of deliberately delaying wages.

One of these two countries was heavily criticised for its archaic and inhumane laws, while the other was told to continue as they were – which one do you think BusinessNZ kicked up a fuss about?

What did workers, businesses and the government think of the ILO response?

The Council of Trade Unions was pleased by such a concise decision, with president Richard Wagstaff arguing that BusinessNZ’s complaint was “more political than credible” and noting that several international worker associations, as well as the Australian and Belgian governments, spoke in favour of FPAs.

As you may have guessed, that’s not how BusinessNZ saw it.

They argued that the ILO ruling has been “misinterpreted” by the government and unions. Instead, BusinessNZ say, the FPA bill breaches ILO Convention 98, which New Zealand has agreed to.

Article 4 of the convention says collective bargaining must be voluntary, and according to BusinessNZ, “the Fair Pay Agreements system is not compliant with this Article because it requires/compels the parties to bargain once bargaining is initiated by a union”.

BusinessNZ argued that because the bill is still being debated by parliament, the ILO was reluctant to make conclusive statements, but that when it does become law the UN agency could rule it breaches Convention 98.

Minister Michael Wood was happy with the ruling, saying that “the ILO’s Committee on the Application of Standards has not found that FPAs are inconsistent with international conventions”. He again railed against “active misinformation campaigns” and called for BusinessNZ to cooperate with the government on the bill.

Labour’s Marja Lubeck, who chairs the education and workforce select committee currently reviewing the bill, was also critical of BusinessNZ’s interpretation of the ILO ruling.

ILO Findings Misinterpreted (by BusinessNZ) https://t.co/jq300ABUyM BusinessNZ failed to get condemnation of the FPA Bill. Tries to rewrite the fact that ILO doesn’t want to hear any more about it for 2 years and kept its condemnation for practices in China, Myanmar and Nicaragua pic.twitter.com/KEKm0kglkD

Why are businesses so opposed to FPAs?

BusinessNZ have refused to cooperate with the government on FPAs and are running a public campaign against the legislation, stating that the FPAs “aren’t needed, they remove the flexibility and autonomy of modern workplaces and won’t improve pay and conditions for hardworking Kiwis.”

In fact, workers will be free to negotiate flexibility and autonomy, as the FPAs will simply place a “floor” on pay and conditions, which workers can freely go above and beyond.

Last year Employers and Manufacturers Association chief executive Brett O’Riley revealed his fears that FPAs “will result in higher wages, and the solution for businesses will be to cut down their workforce”.

Unions, unsurprisingly, see this predicted rise in wages due to FPAs as a positive. “Mr O’Riley is right about one thing – FPAs will lead to higher wages for New Zealanders. That’s because we are one of the only developed countries without some sort of minimum awards,” argued the CTU’s Wagstaff in March.

Since the 1970s, employers have enjoyed significantly increased output from their employees, but workers haven’t seen the same benefit. Labour productivity more than doubled from 1978 to 2016, while real wages have risen considerably more slowly.

The FPA bill is currently at the select committee stage and is expected to become law by the end of the year, with the first agreements being negotiated in 2023.