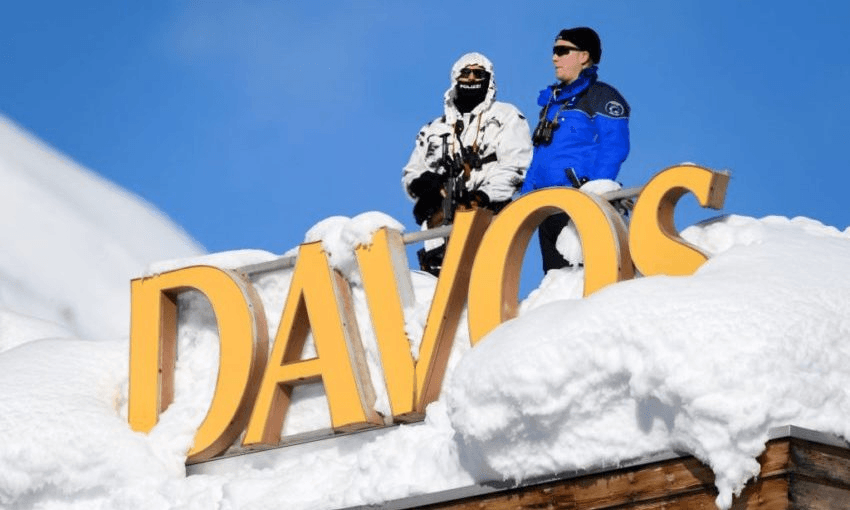 Swiss armed security stand guard on the rooftop of a hotel near the Congress Centre on the opening day of the World Economic Forum in 2018. Photo: FABRICE COFFRINI/AFP via Getty Images

In defence of Davos: if it didn’t exist, someone would have to invent it

Swiss armed security stand guard on the rooftop of a hotel near the Congress Centre on the opening day of the World Economic Forum in 2018. Photo: FABRICE COFFRINI/AFP via Getty Images
Opinion

The case for the meeting that everyone loves to hate, by someone who used to go.

This week sees 3,000 of the “global elite” gather on the top of a Swiss mountain to opine on the state of the world and people could not be more outraged. Again.

The stereotype of the “Davos man” (only 22% of attendees are women) is the CEO of a US$5 billion-plus turnover corporation, who flew there on his private jet to do deals with his brethren and hobnob with government leaders before swigging champagne with Bono at the Google party. To be fair, there is some of that.

Which is why Davos has been described as the “NGO of the status quo”, a “mafiocracy of industrialists, oligarchs, technocrats and politicians” or “fat cats in the snow”. And if you think global business is bad for the world, then you will sympathise with the thousands that have protested the Davos meetings over the years or the manifold regional meetings of parent organisation the World Economic Forum (WEF), and not much anyone can say will change that view. It’s doubtful Davos will ever resolve that the best solution to the world’s problems is to limit consumption or recommend a socialist wealth redistribution economic model. The WEF is an openly capitalist “think and do” tank.

But if you accept global business as a current reality, then Davos really does have a role to play.

For some CEOs, it is the only time they are ever forced to deal directly with NGOs, Trade Unionists, and sceptical media. Membership of WEF for a company costs between US$125,000 and US$500,000 depending on the size of the organisation and the number of passes into the annual Davos meeting required. NGOs, media, social entrepreneurs, start-ups and those weirdly described as “Young Global Leaders” get free or hugely subsidised entry.

Even for the biggest companies that means very few people get the prized white pass that gives access to the conference proper. Wannabes get the dreaded orange version which restricts them to the fringe meetings and the events in the hotels outside the perimeter. So CEOs generally attend alone or with just a couple of senior colleagues but without their retinue of helpers and aides, and because many Davos sessions are very participative and a lot of the meetings happen serendipitously, CEOs are “got to” and lobbied and challenged in person and often with no backup. I have witnessed the CEO of a large Australian mining business debating emission standards with the leader of an environmental NGO in the line for coffee and agree to set up future meetings with the objective of working together.

CEOs are competitive by nature and don’t like being embarrassed and so their annual attendance at the event and the likelihood that, at some point during the week, they will have to personally attest for their company’s progress or record against social or environmental parameters (admittedly rarely the toughest) spurs more improvement than legions of consultants or PR advice to the same effect. And with Greta Tunberg stalking the halls this year the stakes are high.

So while this years’ conference sessions include the usual business-focused subjects like updates on big markets like China and India and tech developments such as the impact of AI, there are as events on topics like; “The business case for Safeguarding Nature”; “Rebalancing executive pay”; “Securing a sustainable future for the Amazon”; “Stakeholder Capitalism” and “Swapping subsidies for Green incentives”. Familiarity, repetition and “shame” at not keeping up with peers all push them along even if you believe that most CEOs of global businesses are narcissistic sociopaths with little natural interest in these topics. And for many businesses from markets without New Zealand’s high expectations on corporate behaviour, this stuff is pretty challenging.

The media play a huge role at Davos. Every global media organisation of any stature is present and the biggest, such as CNN and the BBC, stage their own debates. While most correspondents are left pressing their noses to the wire from the outside, the big beasts of every network are walking the halls buttonholing CEOs on any subject at any time and mostly without the filter or PR teams.

Ironically, much of the spin around the event comes not from individual businesses, but from NGOs launching their reports, studies and initiatives to try and force change onto their target industries, sectors or companies (as nearly every major global corporation is there, paradoxically it is hard for any one of them to stand out other than by contributing to the official agenda debates). For the last 10 years, Oxfam has published its Global Inequality Report the day before Davos opens, a hugely successful tactic that together with the Edelman Trust Barometer, which is usually launched the following day, sets the tone for the week. The first studies and debates on income inequality and CEO-versus-employee pay took place at Davos in the early 2000s way before Thomas Piketty and Oxfam took it up and made it the issue it is today.

This is a difficult balance for NGOs to strike. Publicly, and for supporters and funders, they need to sound aloof and disdainful of big business. Many made much of their support and attendance of the anti-Davos event, Public Eye on Davos, but privately they know that to get things done, they need to work with business and government and the best place to get in the face of the real decision-makers is Davos. Which means just about every major NGO you ever heard of is likely there in force. It makes for interesting verbal gymnastics at times.

According to its website, the anti-corruption NGO Transparency International’s (TI) Chairman, Peter Eigen, is attending this week’s World Economic Forum in Davos and says: “For a coalition dedicated to fighting corruption, there is no alternative to engagement with governments and the corporate sector. Public demonstrations are no substitute for constructive dialogue with the banks if we are seriously engaged in the battle to curb money laundering. That is why we are dedicated to dialogue.” TI added that the risks this poses to the perception of the organisation’s outward ‘independence’ are “a price worth paying if we can achieve results”.

The BBC reports that one of the founders of the Occupy Wall Street movement, Micah White, has meanwhile said his decision to attend Davos, a conference for the “global elite”, is “probably reputational suicide … Within the activist culture there’s an assumption that nothing good can come from that space.”

But he has resolved that marches and “denouncing the elites” are not going to solve the climate crisis. Instead, he now believes in forging a link between “activists and elites”.

“It was not an easy choice to accept the invitation because it goes against contemporary activist understanding of how change should be achieved,” he said.

So the people you would most think should hate Davos, see its value.

Last year Jacinda Ardern was present and a huge hit, but as we are in an election year, she is staying put at home. That is politically understandable. And yet participation at the meeting that “dare not speak its name” should be built into the job description of every NZ prime minister. Put it this way: officially, Air New Zealand has too small a turnover for the CEO to attend. The means very few kiwi businesses get a look in, so all the more reason for a high profile and globally popular prime minister to fly the flag.