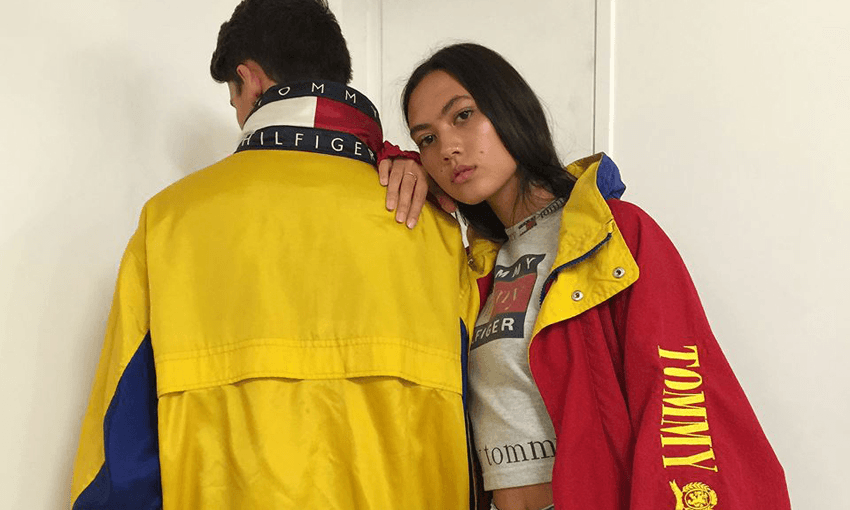 Magichollow wants to change your mind about vintage clothing

By Max Tetlow
Guest writer
Made possible by

On Auckland’s Vulcan Lane, a small opening with a spiralling staircase leads you to a basement, transporting you into the world of American vintage 10,490km from its original home. Max Tetlow talks to the founder of Magichollow, Laura Wright, about how she took her business from a simple online webstore to Auckland’s premier vintage destination.

‘F*** this, I don’t want a real job’ was the thought that turned Laura Wright’s passion into her business.

In 2008, aged just 14, Wright started selling vintage clothing on TradeMe under the alias Magichollow. From there, it moved to Facebook. Instagram came next, and then the webstore. Growing a strong customer base on social media led to pop up stores in Newmarket, Ponsonby and upper Queen Street, and in May 2017, Magichollow introduced Auckland to its first physical store.

At 24, Wright has built Magichollow from the ground up. She started off by op shopping around New Zealand and posting her finds on her social media accounts. The inventory was in her bedroom and she was the only employee. Now, three full-timers, a physical store, over 65,000 followers across social media and nearly two full storerooms of inventory later, Magichollow has firmly established itself as New Zealand’s go-to vintage destination.

And the bigger Magichollow has become, the bigger the opportunities that have come along. In 2015, Wright and her team made their first trip to the United States to hunt for higher quality vintage. Three months travelling around in a minivan and 500kgs of clothing later, they came home to New Zealand; almost immediately, everything they’d collected was gone. “Vintage in New Zealand was really limited, but when we came back from the States, the stock sold out in four months,” says Wright. “That showed us there was a really high demand for American vintage in particular.”

Wright says she didn’t initially want a physical retail store, but decided to open one based on customer feedback. “A lot of our customers would ask to try our clothes on, so really that’s where the pop-up shops came in.” She tested the idea with pop-up stores, including one in Ponsonby in January 2017 that had people lining up for hours just to get in. It was time to take the next step.

“That’s the thing about Magichollow: nothing was planned. It started as a love for vintage. It’s very unorthodox but that’s just how I roll”.

Not long after, a retail space opened up on Vulcan Lane. Wright jumped at the opportunity and in two weeks Magichollow went from being run out of a bedroom to a full store with four full-timers, three part-timers and a handful of casual staff.

‘We want to set the standard for vintage’

Wright’s goal has always been to change people’s idea of vintage clothing. “A lot of people have the conception that we get everything for like 10 cents and mark it up to the highest price. We like to have the highest quality of vintage and sometimes that means spending more.”

The notion that vintage clothing is dirty and smells is Wright’s number one pet peeve – she emphasises that they take the utmost care of clothing they sell. Not only is every piece carefully washed, but it’s hand picked by Laura to fit the brand. They’re not just putting out anything on clothing racks for the sake of it, she says. The clothes you see under the Magichollow name fit the brand, whether it’s a striking Marlboro tracksuit or a reworked crop top sweatshirt.

The premium apparel Wright and her team collect has created a loyal and ever-expanding customer base. “I was shooting with a model one day and she was saying her and all her friends had alarms on for 4:55 every Wednesday ready for the new drop.”

Long-time customer Jessica Carr is one of those girls. Although she lives in Dunedin, Jessica has been shopping with Magichollow since 2013. “I had my alarm on, ready for the Wednesday drop, refreshing religiously to make sure I got what I wanted”.

As much as she might like to, Wright can’t manage all aspects of Magichollow, which is where Zoe McNicholas and Makaira Lee come in. McNicholas works as the in-house designer – she’s behind all the crop tops and jean alterations you see online. An AUT fashion graduate, she started as a Magichollow intern while the company was taking moving into their Vulcan Lane premises. Now she’s about to launch a debut re-work capsule collection dubbed an “ode to sportswear”. It features 20 pieces crafted by McNicholas including Adidas track pants turned into structured tops, three Champion hoodies combined into one and Ralph Lauren business shirts transformed into tailored, feminine silhouettes.

Makaira Lee is in charge of the three-headed dragon of social media, styling and design. She studied photography at AUT, but has since gravitated towards fashion styling. These days she works closely with Wright and McNicholas to style their vintage in modern, unconventional ways.

The Magichollow crew aren’t slowing down anytime soon. A new buying trip to the US is in the works, and with plans to come back with another 500kgs of vintage clothing, they’re going to need a lot more room. While they’re happy with their Auckland store, they say the thought of an Australian expansion is at the back of their minds. But who knows? Magichollow is always working on the fly and so far, it’s worked.