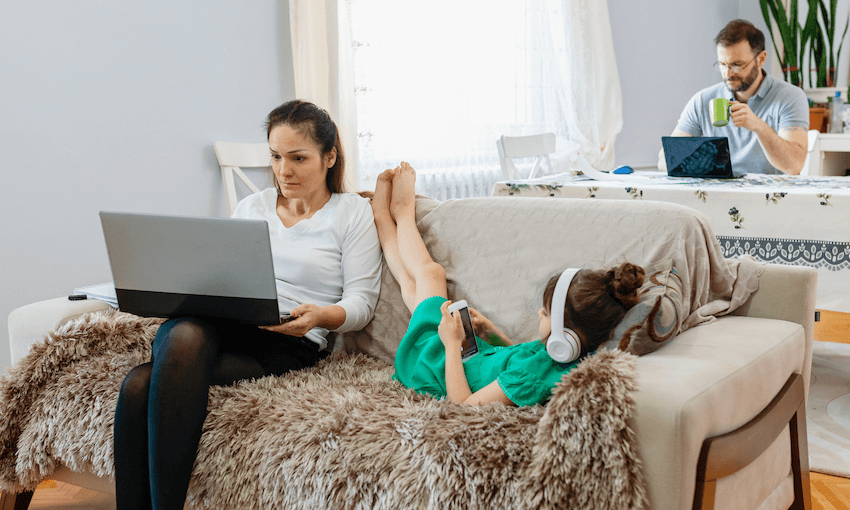 By NZIER
Public Good Team
Made possible by

Over lockdown, school, home and the office all merged into one place, affecting how we worked and when. The NZIER public good team explains why we need to rethink how we measure productivity.

How productive was your lockdown?

Now we’re in level two, it’s the perfect time to pause and reflect on the stuff we got done over seven weeks stuck indoors. If you found yourself with heaps more time and are also a personal growth guru, maybe you’ll fondly recollect your time learning Spanish, sweating along with Les Mills home workouts, perfecting your sourdough, and in contemplative meditation.

For those with more realistic ambitions, a productive day in lockdown may have been one when you both got to Countdown and watched the whole series of Tiger King. Then there are others who were expected to work from home while also teaching their kids and minding a toddler, who didn’t even have time to think about how productive their day was because they were too busy getting through it. The point is, productivity depends on the context, who you ask, and how you measure it. It’s similar when you think about productivity at the population level – exactly what is it we’re trying to measure?

Why do we care about productivity at all?

In general, economists tend to use a specific definition of productivity – a person, factory or country becomes more productive if fewer inputs (like work hours, or farmland, or laptops) are needed to make the same outputs (like jumpers, or milk, or quarterly reports). Defined like this, productivity is much more interested in our efficiency gains than overall output. Intuitively, improving productivity is generally good for improving quality of life. For example, for those who could afford them, in the 1950s washing machines were a game changer for freeing up people’s (mostly women’s) time, replacing the time-consuming “boiling the copper”.

There’s also a sustainability argument for productivity: if we can create the same amount of stuff with fewer inputs, there’s less need to take resources out of the ground. Productivity doesn’t cover everything we care about, like the gap between the richest and the poorest, but it is closely linked to our wellbeing and income, making it worth keeping an eye on.

How do we measure it?

Having a sense of how productivity is changing helps make informed decisions about the future. There are two parts that need measuring here: the inputs and the outputs. On the output side, traditionally everything that contributes to GDP gets included – essentially all goods and services that involve money changing hands.

We don’t just include the physical, factory production-line stuff, we also include any services involving money, like legal fees or GP consultations. On the input side, we want to be able to adjust our GDP for hours worked, since GDP growth driven by longer work hours is a totally different story. In order to account for hours worked, first we need to know how many hours people are actually working, and one of the simplest ways to find out is to just ask people.

In New Zealand, we use a survey that goes out to a representative sample four times a year, and includes questions about how much time people in the house spend doing paid work. When we divide our GDP by reported hours worked, our productivity isn’t great compared to other OECD countries. GDP is growing, but so are our work hours, so we’re not getting much more productive. The government has recognised it as a persistent problem in New Zealand for a long time, and we’ve had our own Productivity Commission since 2011, which has focused on improving the ratio of GDP to inputs.

The problem is, measuring productivity in this way misses a big chunk of the story on both the output and the input sides, since many spend time doing unpaid, but definitely productive, work. It’s always been there, but has been thrust into the spotlight during the lockdown, with some people taking on new or extra caring responsibilities as schools shut down while also being expected by employers to work regular hours from home.

Caring roles, like childcare, are hugely beneficial to productivity. To put it crudely, future workers are much more productive themselves if they’re brought up in a healthy, happy environment. But they’re also socially important. Without parents doing parenting, we simply wouldn’t function as a society.

There are endless other unpaid but wholly productive activities that go uncounted besides care: baking a lockdown banana bread, participating in pōwhiri, teaching your grandparents to use an iPad. In fact, unpaid work gets counted as productive as soon as you pay for it – for example, a parent doing unpaid childcare goes under the radar, but a parent paying for childcare is counted.

Why should we value unpaid work?

This discrepancy between measured productivity (paid) and real productivity (paid plus unpaid) causes problems, because people who do unpaid work are doing undeniably productive tasks, but without them included in measurements, the contributions and productivity of the market economy – that’s the stuff we buy and sell – become the policy focus.

It’s also a problem because unpaid work falls largely on the shoulders of women. One recent report notes that since lockdown, female academics have sent much less research to journals for publication, while men have sent more, and this is largely due to the multitude of unpaid demands on women’s time.

Further, not counting unpaid work disproportionately overlooks wāhine Māori and Pasifika women; the Ministry of Women notes that wāhine Māori tend to have greater responsibilities for childcare and looking after the sick and elderly, so Māori contributions to productivity are even less likely to be counted.

So, what do we do about it?

Several economists have been pointing out the need for valuing unpaid work for decades, including Marilyn Waring, author of If Women Counted (1988); Prue Hyman, author of Women and Economics (1994); and more recently Victoria Bateman in The Sex Factor (2019), which made NZIER’s recommended summer reading list last year.

One option is to price up the unpaid labour and put a dollar amount on it. Statistics NZ carries out a time use survey, which helps us capture both paid and unpaid hours worked. In 2009/10 it found that men and women both spend about 6.75 hours a day on productive activities on average, but men were paid for 63% of their time and women were paid for 35%. We could estimate a dollar amount for unpaid hours, by using the equivalent hourly rate if someone was employed for the task, or by using the average wage.

Analysis by Statistics NZ finds that estimates using the average wage approach valued unpaid work at $40 billion, or 39% of GDP, in 1999.

However, this approach has problems too. Many economists point out it’s probably not good enough to just incorporate unpaid work into our existing way of measuring productivity, because those very measurements don’t recognise the necessity of unpaid work, which allows buying and selling to happen in the first place. In fact, in her book Who Cooked Adam Smith’s Dinner?, Katrine Marçal argues that Adam Smith, who is often credited as the founder of western economic thinking, was only able to develop and publish his theories about productivity because his mother did all his cooking, cleaning and housekeeping.

Whether you secretly enjoyed a slower pace of living, or had the busiest seven weeks of your life, most of us would expect a new normal coming out of lockdown; perhaps with different priorities and perceptions of “productive”.

On a policy level, it’s a good time to recognise what values our productivity measures should capture. If we want to recognise the value of unpaid work, it’s good to start by including unpaid hours as an input, and the services they provide as an output. But if we recognise that unpaid work is the foundation on which the measurable market is built, allowing people to go to work, create stuff and earn a living, it becomes difficult to put a monetary value on it at all. A good first step is to get a better idea of how New Zealanders use time, which comes from ramping up the time use survey with more frequency; there have been only two since 1999. From there, it’s up to policy makers to decide how the value of our time is best accounted for in a meaningful way.

And who knows, maybe they’ll agree that extraordinary productive contributions, like social cohesion and inspiration, come from watching Tiger King after all.

What impact will Covid-19 have in the classroom? It all depends on these four factors
By Siouxsie Wiles and Jin Russell
Guest writer
29th April, 2022

Too few of us understand the long term risks of contracting even a mild case of Covid-19.
By Freya Sawbridge
Guest writer
28th April, 2022

Too often disabled people were treated as an afterthought, rather than the important, at-risk community they are.
By Robyn Hunt
Guest writer
28th April, 2022

What does the High Court decision on MIQ actually mean?

Don’t think of a mask as a restriction – think of it as a public health measure that enables others in your community to do things that you take for granted.
By Siouxsie Wiles
Contributing writer