The second series of Guy Williams’ small-town showcase works best when it gets out of the way of the strange stories it’s trying to tell, but the comedian’s relentless curiosity keeps it on track.

“Our people, our stories” is one of those warm-hearted phrases that has been leached of all life by various corporates feigning humanity and relatability. New Zealand Today, revived for a second season after a public cancellation (not that kind), attempts to put some life back into the phrase by focusing on our weirdest people and our strangest stories. The team of five million is not made up of normies, you guys, and Guy Williams is back to shove a microphone in the faces of the weird souls hiding in plain sight.

In the first season, now two years old, Williams investigated stories including a haunted grandstand, a gang member promoting healthy food, and the intense flat-Earth community. The first episode of the second season is dedicated to two stories: Feilding’s bizarre reign as New Zealand’s most beautiful town (16 times in 32 years!), and Shaun Pollard, the man who got a tattoo calling a win for the All Blacks in the 2019 World Cup – when they didn’t even get to the final. Future episodes promise a deep dive into Christchurch’s boy racer scene (good luck!) and meeting the man who stole a monkey from the Wellington zoo.

The loose structure allows Williams to let his persona run wild. Under the guise of journalism, but better dressed than any roving reporter I’ve ever met, Williams puts microphones into people’s faces and asks them somewhat leading questions. It shouldn’t come as a surprise to find out he does not uncover a conspiracy at the heart of Feilding’s consistent success, but he does find Dele Gibbs and Rina Wallace, two delightful local women who do care deeply about it. 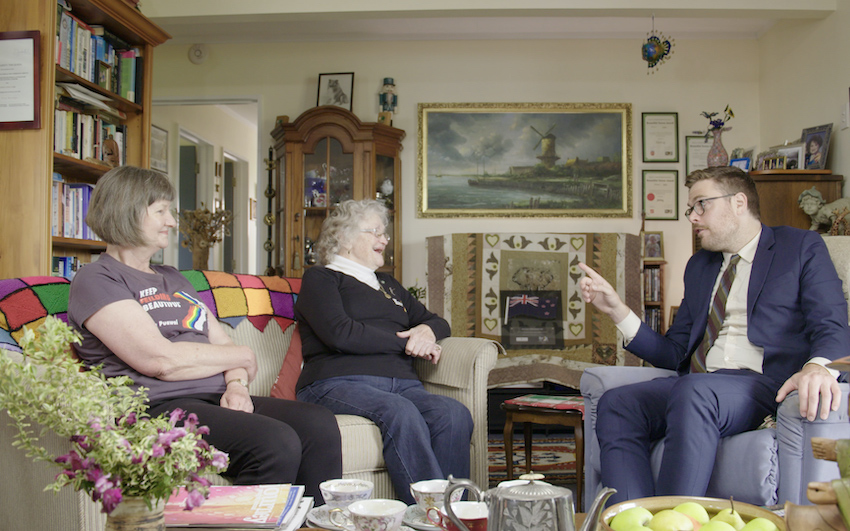 New Zealand Today is strongest in these moments, when Williams gets to put aside the role of driving an interview (which he’s very good at) to simply enjoy being in the presence of delightful people. Dele, proudly wearing a “Keep New Zealand Beautiful” t-shirt, freely pokes fun at herself, pretends to take phone calls in order to divert Williams, and eventually convinces him to go and see Feilding for himself. It’s delightful television, and the show shines when it allows these loveable characters to be themselves.

It’s less successful when the interviewees play it up for the camera, clearly having seen the show before. When they’re trying to match Williams’ bull-in-a-china-shop energy, it comes across awkwardly. Some of the interviewees attempt to reach for jokes as often as Williams does, but their attempts to riff with him tend to fall flat. While Williams can sit comfortably in his professional awkwardness, his interviewees don’t necessarily have that skill, and it shows.

It’s a dissonance that works in a series like Nathan For You, a clear touchstone for New Zealand Today that stumbles into heart on the way to humour. The difference is, New Zealand Today is much more heart than it is humour. The show has a such a clear love for everybody on camera, embodied by Williams himself, that seeing them sit in a situation of somebody else’s creation makes for uncomfortable viewing. A duet with a man who busks in the middle of Feilding in the dead of night feels more like it’s making fun of him than making fun with him. It’s taking the easy way out to a joke rather than meeting him halfway to make something funnier and more heartfelt.

When New Zealand Today plays to its core aim – our weirdos, our yarns – it’s an unqualified success.

You can watch New Zealand Today on Thursdays at 9pm on Three, and on demand on ThreeNow.

In the latest episode of The Real Pod, Alex Casey and Jane Yee farewell The Bachelor/ette NZ for 2021 and recap the week’s fights on MAFS AU. Subscribe and listen on Apple Podcasts, Spotify or your favourite podcast provider.