I’m a child of the 80s and 90s. I watched a lot of TV and was a big fan of aggressively marketed brand name food and drinks. I remember the launch of countless energy drinks, and the launch of exciting American chain Burger King. And, I remember when I first encountered the delicious salty and slurpy treat that was instant noodles.

The instant noodle market is huge now, with exciting combinations available from many brands. Some even involve a series of steps with dried vegetables, oils, pastes and crunchy onion bits. But it was once a much simpler time, and my introduction to the instant noodle was by way of Maggi 2 Minute Noodles.

The name really told you everything. They were noodles. They took 2 minutes. In the 30-something years that have passed since my first bowl of (I’m reasonably sure) chicken flavoured Maggi 2 Minute Noodles I have eaten, at a rough guess, 730km of instant noodle. Mostly prepared according to packet directions, but let’s be real here – I’ve certainly eaten some dry as an oddly crunchy snack.

Warning Note: A teacher at some school camp told us very clearly once that it was dangerous to eat dry instant noodles. They would, he insisted, expand in our stomachs and cause them to burst. I have done absolutely no research on this fact, but let’s just assume that it’s definitely true. Don’t do that.

Anyway, it’s been three decades of relative noodle bliss. I’ve tried many brands and flavours, but in my heart I still think fondly of the original 2 Minute Noodle, initially available in just three flavours: Chicken, Beef and Oriential (that’s still the name they use – I don’t really know what taste it’s supposed to conjure). The flavours later ballooned to include other offerings such as Chicken and Corn, but more recently they’ve gone back to their roots with the original triumvirate.

But that noodley peace was shattered recently and my world was rocked. Basic facts that I assumed to simply be foundational to life were challenged. It happened when I saw this tweet from UK-resident New Zealand comedian Alice Brine:

In New Zealand, 3 minute noodles are called 2 minute noodles and i think this tells you everything you need to know about what happened with the UK covid 19 response. pic.twitter.com/Bo1ilXF3vo

I honestly didn’t believe this at first. I immediately headed to Google to do my own research! But it was true. The same noodles in the UK apparently take a minute longer. Same packaging, ostensibly the same food, but a full 50% longer in the UK.

So I did exactly what anyone in my position would do – I immediately fired off an email to multiple email addresses offered for media enquiries at Maggi’s parent company Nestle in both the UK and Australia (NZ doesn’t get its own Nestle corporate monolith).

While I waited for a reply I started to do some digging.

The webpages for both products provide similar preparation directions – both rely on a 850W microwave oven, for example – but there was one very pronounced difference. Could it be that I’d found the smoking (steaming?) gun already?

3 Minute Noodles call on the diner to begin with the noodles in a bowl along with 250ml of cold water. They are then heated for two and a half minutes on high (I guess 2½ Minute Noodles would have been a complicated branding prospect, so fair call to round up).

Whereas New Zealand’s 2 Minute Noodles make a fairly dramatic assumption about the diner’s mise en place, calling for the dried noodles to be paired with 375ml of boiling water (emphasis mine, but maybe Maggi should have done the same?!) before microwaving on high for only the 2 minutes called for by the product’s name.

So is this simply a case of hiding a little bit of the prep time in the call for boiling water – and if so, should NZ’s noodles rightly be called 3 Minute Noodles? Or was there a broader ideological difference between the European and Australasian Maggis?

While I waited for the corporate PR cogs to turn at Nestle HQs in Australia and the UK, I decided to reach out to Alice Brine, the Kiwi comedian who’d first made me aware of the noodle disparity. I asked Alice if she could remember how she felt when she first noticed this subtle but significant difference.

“Obviously I was very shocked. Tried to refocus my eyes. Didn’t believe what I was seeing. Looked at my sister. She told me I’d gone pale. She asked me if I needed to sit down. I called my mum crying,” Alice told me by email. “Just kidding,” she continued. “I did find it weird. But also, if I’m brutally honest, loads of things in London take ages. The internet is so slow. Setting up a bank account is one of the most archaic and intensely dragged out procedures you’ll ever experience. I mean, look at the Covid response… it’s no wonder.”

This was followed by an urgent parenthetical asking me not to mention the ‘slow London’ thing without pointing out how she also said she loved London. So in the interests of not seeing Alice run out of town, she also began her email singing the city’s praises. “I love New Zealand so much but I also love London,” offered Brine. “I have visited bits of the UK but my actual experience of the UK is London and I love London with my heart and soul.”

Brine’s hunch aligned with mine – that the NZ instruction to begin with boiling water was the key. I had wondered if Brits, upon learning of their longer noodle wait, were shocked to their core? “My London friends could not give less of a fuck about this,” Brine told me. So, I guess that’s pretty definitive.

But what about Kiwis? What did we make of this discovery? I did the obvious thing and asked a New Zealand comedian who has not yet emigrated to the UK.

Guy Williams, New Zealand’s premiere comedian-whose-email-address-I-have, suggested it might be an issue of standards. “Haha that is amazing!” he began in a very Guy Williams way before jumping straight into speculation. “Is there higher advertising standards in the UK? Or in the EU? 2 minute noodles don’t take 2 minutes – they take 3 with prep time!” He then took an unexpected pivot into isolationism, “this is why Brexit is a great idea!”

Soon the official word arrived. “The noodles are made in different factories – which means differences in the equipment as well as in the flour that’s used. Choosing the right time is a matter of what works with the thickness and consistency of the noodle, as well as how people prefer their noodles,” Margaret from Nestle Oceania offered. It was fair, but didn’t really seem to get to the heart of the matter: how, and when, had the branding diverged?

Conspicuous in their lack of response was Nestle UK’s PR team – despite receiving my request by start of business Thursday, there was still no reply by the end of day Monday. What is Big Noodle trying to hide?

The 2 Minute branding seems to be the most common, used in Oceania, some parts of Asia and in India where the noodles took on a life of their own and transformed parts of Indian cuisine (a story for some other time). The brand was launched in New Zealand in 1985, two years after the launch in India.

Indeed, it seems that the UK’s 3 Minute Noodles are the outlier, and they seem to be moving away from the time-based branding entirely, probably embarrassed at being showed up by The Colonies. 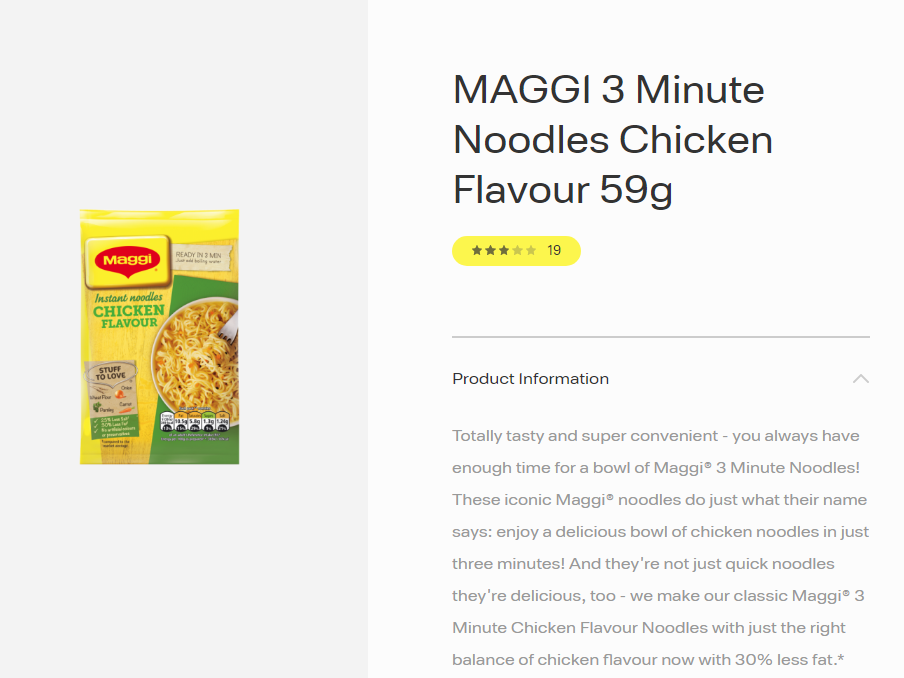 Despite still carrying the 3 Minute name on the website, the current noodle packaging simply calls the product “instant noodles” despite the fact that “instant” would probably be interpreted a less than three minutes.

Even more confusing, perhaps, is the fact that the new packaging makes the feature claim that they are “ready in 3 min” and that you “just add boiling water” marking a departure from the prescribed start-from-cold method that seemed to explain the timing difference in the first place. Whatever the case, it looks like the UK is backing away from their divisive branding, but still hedging their bets on just how long it might take to get the perfect noodle.