I really resent tangelo trees, taking up room that rightfully belongs to a more useful plant. Partly it’s because I am old and legally obliged to get into a furious lather about trivial things, partly it’s because the very existence of tangelos is objectively stupid. Lots of people grow them but only the foolhardy want them. Lemons and limes, yes, mandarins for doubly sure, but tangelos? I’ve never met a homegrown one I liked. More sour than oranges and harder to peel than mandarins, they are surely the worst of both worlds. Just cut the crap and reach for a real orange already!

Sadly, homegrown oranges never seem to be much better. Maybe our winters aren’t cold enough – it can’t be that our summers aren’t long enough, surely. Maybe it’s the varietals we grow here; maybe I’ve eaten too many sun-kissed Floridian navels and had my head turned, but Kiwi oranges and tangelos always seems to be on the too small and way too sour side for me.

I once flatted in a 1950s neighbourhood of Auckland where the long and relentless arm of gentrification had not yet reached, a pleasing little time capsule of all that was best in socialist town planning, beautifully designed for the needs of that imaginary beast, an average nuclear family. The whole suburb had been laid out in concentric crescents and cul de sacs, radiating out from a school, a kindy that doubled as Plunket Rooms, and some shops. Every curved block had its own bus stop. Each quarter acre plot was positioned to tip the front windows of the weatherboard and tile houses towards the sun, and instead of fences every front lawn was edged with ageing citrus trees in between each narrow concrete driveway. It took me a while to notice that they had been planted in a pattern down the street, obviously at the same time the houses were built: orange, lemon, grapefruit, orange, lemon, mandarin, mandarin – and repeat. The bus stop was two oranges, two lemons, and one grapefruit away from my front door. 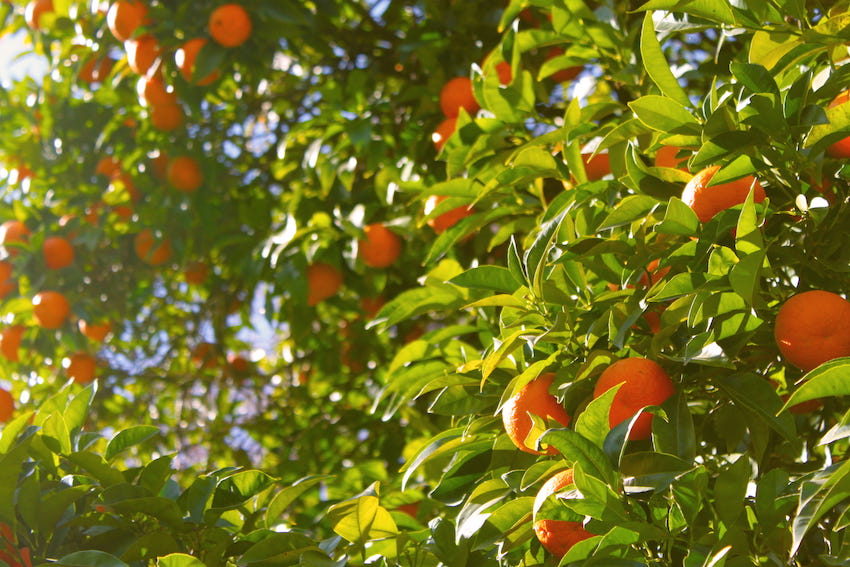 Nobody ever resents a bountiful mandarin tree

The logically minded amongst you will realise that my own shared flat was also the lucky owner of a mandarin tree (plus a jagged dead trunk jutting out of some long grass that must have once been its twin). Sometimes school kids walking home would furtively nip across the lawn and wrench a couple of fruit off, leaving a trail of peelings on the footpath to mark their getaway. The mean old guy next door particularly hated this, even though, understandably, the little thieves hardly ever targeted his sour little orange tree. He would grumble and snark about stealing and delinquency and “Housing Corp kids”. I would pretend I couldn’t hear him and shut the door, wishing I was better at pithy comebacks. I used to be a Housing Corp kid and I will always think the world has come to terrible state when a kid from your own community can’t eat a piece of free fruit from a free tree that was planted on the side of the footpath precisely so that kids in your community would always have access to healthy food. It’s not like the mean old guy ever used his oranges for anything anyway. Even at their ripest they were bloody sour and impossible to peel (so, I might have stolen a couple. Once a Housing Corp kid… I guess.)

The only thing worse than being a mean old guy who hordes food is leaving it to rot on the ground or be carried off by rats. If you have inherited an old inedible orange tree, currently bursting with ripe and horrible fruit, what should you do? Apart from foisting them onto the naïve and unsuspecting, not much. They’re not even really welcome in compost. You could juice them all up easily but at what danger to your tooth enamel? The resulting stuff is so acidic you’ll need a thousand spoons of sugar to make it palatable. That’s the kind of kitchen tomfoolery that can only lead you down a path ending in those tragic homemade iceblocks that are just ice and no flavour after two sucks. I would never take you anywhere that ends with such high likelihood of mouth ulcers, trust me.

To get rid of tangelos/sad sour oranges without actually having to waste, really taste (or peel) them, make a cake. This is good advice for any time really, but another great thing about this particular cake is the lack of need for flour. I am still traumatised by the Great Flour Outage Outrage of 2020, so I’ve made sure ever since to have had a big packet of ground almonds in my cupboard as a substitute. When there is no bread, we will at least have macarons! Seeing it there recently reminded me I haven’t made this flourless orange cake for years – I first used it when I had a gluten intolerant flatmate and have loved it ever since, and it also happens to meet all of my own dietary requirements which are 1. Ridiculously easy and 2. Very pleasant to eat. Adapted for my ex-Housing Corp kid tastebuds from the famously posh Nigella Lawson clementine cake recipe, I highly suggest serving it with thickly grated dark chocolate and cream because no combination ever tasted better with a bitter, sour orange and warm spices.

Put the fruit in a saucepan and cover with water – boil for an hour or so until the horrible little things are soft and squishy. Cool, and ditch the water. Dry the oranges off a bit. Get rid of the stems but the rest can just go straight into the food processor, or use one of those stick blenders to turn the whole fruit into mush. In a separate bowl, whisk up the eggs and sugar then pour this back into your orange mush; then add the almond meal, mixed spice and baking powder. Fold together. Tip the cake mix into a well-lined tin and cook slowly, at about 160 degrees for 45 minutes to an hour. Check in towards the end of cooking, as this cake has a fussy habit of burning on the top if you leave it too long. It’s ready when a knife blade through the guts comes out clean.

When cool, gleefully grate as much rich dark chocolate on top as you can. Make it really snow. And serve with a lot of whipped cream, because nobody can stop you. You’re a grown up. You can eat whatever brings you joy and fuck eating something awful just because it’s ‘healthy’ – life is way, way too short to waste a thought on sour little oranges.