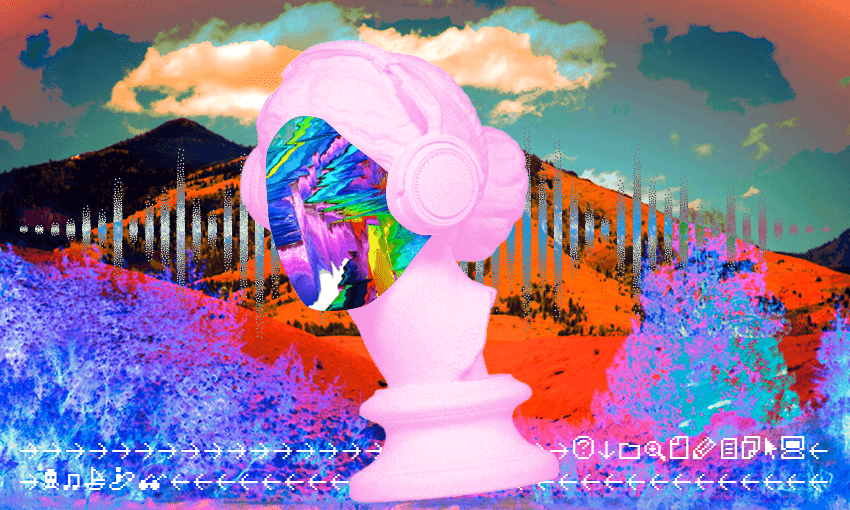 For some people, playing different sound frequencies in each ear of your headphones produces a drug-like effect. Josie Adams gave these auditory hallucinogens a whirl for IRL – with mixed results.

Last Tuesday I spent three hours listening to a YouTube video called “The Great Awakening”. I hadn’t fallen down a New World Order rabbithole – I was using sound frequencies to manifest organ healing and material abundance.

This video is one of hundreds on YouTube that uses “binaural beats”; sounds created by playing a different frequency in each ear, so the brain creates a third inside your head. It sounds very clinical, but most binaural beat tracks sound like something you’d hear at a spa. It’s very whale song, pan flute vibes – but, the internet says, it could have the added benefit of getting you high. While most listeners are using the beats to relax or get to sleep, a recent study published in Drug and Alcohol Review indicated that about 12% of people listening to binaural beats are trying to mimic the effects of psychedelic drugs.

These binaural beats, sometimes called “digital drugs”, can be downloaded as audio files, watched on YouTube, or streamed on Spotify from playlists named after the drugs they emulate – peyote, DMT, cocaine.

I am no scientist, but I don’t think listening to drugs is the same as doing them. My bosses agreed, and let me go on an audio binge last week in pursuit of even a tiny buzz. After a four-day digital drug bender, I emerged as my healthiest self.

Many videos had millions of views, and the creators hawked everything from headphones and therapy to weighted blankets and cryptocurrency.

But I was here with a purpose: the first video I watched was called “digital drugs”. It had 2.6 million views and “WARNING high intensity” in the title. I put my headphones on and settled down in bed. I was ready to get absolutely zonked. Instead, I had a nice little lie down. At one point I felt sensations in my legs, but this turned out to be pins and needles. I tried staring into the sky while listening, hoping the sun madness would bring forth little green men from the walls. I just got a sore forehead from squinting.

I did hear a drumming in my ears after the video stopped; very slow and not rhythmic at all, like  a drummer who keeps forgetting which hand the drumstick is in.

Still not high, I tried a 12-minute video that offered fractal patterns as well as mind-melting audio. The screen got a bit wider at one point, and I started to see images in the fractals more clearly: kidneys, fists, trees, eyes. I got a bit hot, but that’s been happening more regularly since my diet became 60% dry Nutri-Grain.

You shouldn’t do drugs. But if you’re going to listen to them, at least listen with a friend – if not for safety, then as a control study. The lovely Brooke, who is an artist and therefore, I assume, really good at hallucinating, listened to the same binaural beats I did. “It didn’t make me feel like I was on drugs,” she said. “But it did make me feel like I was in danger.” She compared the experience to being inside a metal shed with a truck driving past; the sounds were shaking her mind walls in a way that was more agitating than buzzy.

“If I had to compare the feeling to any past drug experience, I would say the closest it comes to is when you’ve indulged in the weed too late in the night, and you wake up still feeling not quite fully yourself,” she added.

It comes close, but still isn’t quite there. The most successful “high” came from a 15-minute magic mushroom sound. Behind the frequencies I could hear a very quiet half-tune, like the sound of a brass band playing three blocks away. Closing my eyes in a sunny room meant the light was buzzy when I finally opened them. There were none of the more serious effects of taking mushrooms (can’t stand up, can’t read), but also none of the nice ones (having fun). A thudding continued in my ears after the video ended. It was more like walking into Cuba Dupa than doing drugs, but still – nice vibe.

A full day of staring into fractals made me think the astral plane might be a better place to reach an audio high. Having hallucinations at night seemed like an easy option, because I already do that on the reg – it’s called “having dreams”. I decided to listen to a lucid dreaming tune and hope my night horrors would become a shadow realm opium den.

It was not to be. I listened to the binaural lullaby for 50 minutes before I had to rip the headphones off to sleep properly, and then all I dreamed about was a succession of rideshare apps not working. I couldn’t get home, over and over. All night long I rode a long purple GPS tracker around and around Lyall Bay in Wellington, for some reason. If any of you spotted my astral self projected into an Ola on Tuesday night, I’m sorry.

It was time for a new approach. So far I’d used only my ears – I needed to get the rest of the body involved. I took the beats to the gym, where I tried to improve my 5k run time with the power of sound. In one ear went 8Hz and in the other went 27Hz, and they were melded together with a third frequency – the tinny CityFitness speakers blaring Dua Lipa.

I found this very stressful. My heart rate went up, which is great cardio, but I also felt a deep pressure in my sinuses as though I was about to start sobbing and punching at the same time. Assuming this was a personal defect, I asked my gym buddy to have a go.

“It’s putting my brain into fight or flight mode,” he concurred. “I don’t like it.” He described the physical sensation as a “pulsating head”, but admitted this could have been from weightlifting.

While I never got high, the hours of listening to low and throbbing frequencies were fantastic for productivity. I don’t know if it was because my mind was desperate to throw itself at anything else, or if I’d tapped into some kind of gamma-wave megamind mode. I renewed my car rego, did all my homework, cut down my Nutri-Grain intake and started running 5k every day.

Even as I write this, I’m listening to the most-viewed binaural beats video on YouTube: study music. I don’t enjoy it, and it definitely doesn’t get me high, but listening to the cyber pan flute really honks my brain horn.

Did the internet get you very high? Met the love of your life in a buzzy way online? Do you moderate a big online community or make your living in the gig economy? If you have a great yarn about the internet, get in touch at irl@thespinoff.co.nz.