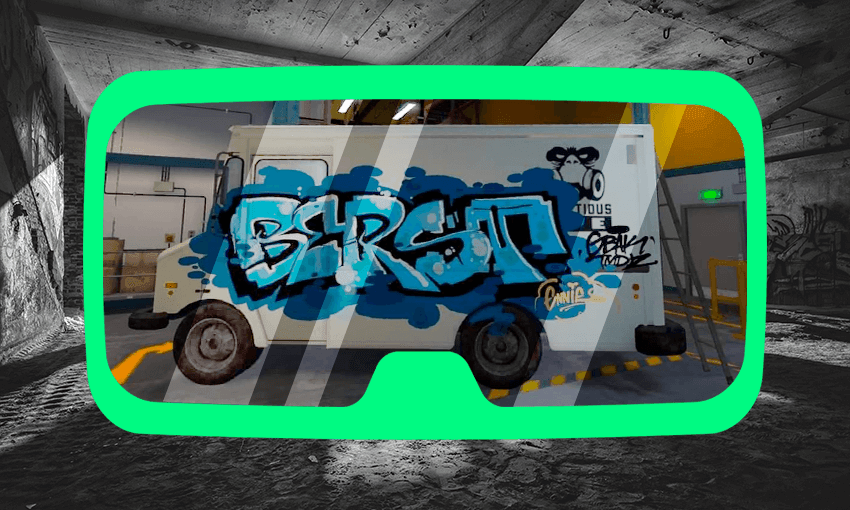 Graffiti is an art form traditionally anchored in physical, urban space – but does it have to be? Shanti Mathias talks to an artist taking his work to the metaverse.

I have found the metaverse, and the metaverse is in Epsom. In the small downstairs room of a house on a leafy avenue near Auckland’s Cornwall Park, artist Bobby Hung is guiding me through his artwork in Kingspray, a virtual reality app designed to create a realistic experience of graffiti.

“Push the button that’s flush with the controller,” says Hung, who is a patient man; I’ve been blundering around his tagged-up landscape of urban decay for at least 10 minutes, and I’m lost. It’s disorienting, wearing a VR headset, looking at my disembodied hands clutch cans of spray paint, and knowing that at the same time I am stumbling around someone else’s spare room. I try to relax into the metaverse and stop thinking about my body, ignoring the yips of Hung’s dog (adorable, tiny, named “Latte”).

I manage to spray some virtual paint on a virtual wall, next to one of Hung’s more elaborate artworks. The wall features bold lettering, his tag – “Berst” – in elaborate letters. I do a little squiggle, then lean closer, trying to outline the shape with black. I finish my “artwork” – it dignifies my visual ability too much to even call it that – and continue to follow Hung’s instructions to take a picture of my scribbling and send it to Facebook.

Facebook, really, is why we’re here; since rebranding as Meta, the company has been desperate to show what a metaverse is and why it might be useful. It’s a difficult proposition, given that much of what is promised about the metaverse – a digital world seamlessly integrated with the real one – is based on the enthusiastic proclamations of tech billionaires who have everything to gain from the internet being further incorporated into our lives. To support the proposition that the metaverse is a good idea, Meta has released an app that lets your avatar stroll around a virtual world (albeit without legs), Microsoft is working on an app that will let your Teams meeting take place in virtual reality, and many many many companies have promised that metaverse technologies will change digital art.

I’m talking to Hung at the behest of a PR company which is working with Meta. They’ve given him a Quest 2 VR headset from Oculus, also a Meta company, and they’ve given me the opportunity to talk to him and try it out, hoping, presumably, to work on that public buy-in factor, to show more people why Meta’s future digital world will be transformative.

Hung, a longtime graffiti artist who does commercial design work as well as teaching and researching at Unitec, is enthusiastic about using a virtual reality app for graffiti. He’s passionate about the art form, and walks me through a brief history of graffiti and what “post graffiti” might look like as artists take their practice into traditional fine art and commercial spaces.

From a graffiti artist’s perspective there are lots of reasons why working virtually is an advantage. Hung lists them for me: it makes it possible to collaborate with artists overseas. It makes it easier to document graffiti, lending permanence to an ephemeral form. It allows artists to plan and practise large-scale projects. And, importantly, it’s not illegal.

Hung is particularly passionate about the ways that digital graffiti can make the artform more accessible. “I started tagging when I was 17,” he says. The cost of a can of spray paint, around $10, is a lot for a young person with no source of income. While an Oculus Quest headset is about $700, publicly available units – at schools, say, or libraries – could make practising graffiti more accessible, as well as letting artists see work from around the world.

From an environmental point of view, digital graffiti is less wasteful – no empty aluminium cans abandoned beneath colourful paintings, no health hazards from paint fumes. “I could paint a 10-storey wall without burning through hundreds of paint cans,” Hung says.

On these practical considerations, digital graffiti has a lot going for it. But graffiti is an art form designed to interact with physical space; what does it mean to translate site specific artworks to a digital landscape?

“Digital graffiti will never replace graffiti, just like digital painting will never replace oil painting,” says Hung. There’s a spontaneity to real-world art – you may never know who sees a piece of art you’ve tucked at the entrance to a train tunnel, or what happened to a tag left in a building slated for demolition. But making art with others epitomises the nearly-realised possibilities of the metaverse to come, Hung says: if the technology takes off, there will be a way to connect with other artists beyond the superficiality of mutual follows.

There’s also profit to be made. They may simulate the real world, but unlike the real world, metaverses are being built by corporations with commodification built in right from the start. Even if Meta keeps its metaverse open, it wouldn’t have invested $10 billion (so far) in the enterprise if there wasn’t money to be extracted from games, hardware, digital “skins”, and in-world commerce. NFTs epitomise this, turning works of art into inherent commodities with encryption embedding their ability to be traded again and again.

To Hung, this isn’t a problem. “It’s impossible to live in a world that’s free of capitalism,” he says: he’s comfortable teaching at Unitec, selling books, painting commercial murals, making documentaries, gathering oral histories about graffiti in New Zealand, and still tagging where and when he wants, for free. While Hung hasn’t ventured into NFTs himself (yet), he’s had friends who have made money from selling their collections. “The system of the art market is quite flawed,” he says. “You should be able to determine what your value is, not a gallery.”

Graffiti is just one of many art forms reckoning with digital possibilities. Sotheby’s – the world famous art auction house – has launched a metaverse for its NFTs. Locally, Glorious intends to do the same for New Zealand art. While many NFT projects are dodgy shitshows producing art destined to become a very average profile picture, other projects help artists get paid and enrich physical space.

While the smooth rendering of the VR graffiti app is realistic enough to be disorienting, it’s also eerie. Kingspray uses the aesthetics of a post-industrial Western city – brick walls, desolate rooftops, subway stations where the trains aren’t running. As immersive as it is, the app also feels generic, nowhere-in-particular: the streets do not have names, the buildings are not owned by developers I resent. There are no people: it’s just me and my digital hands, alone in a fake metropolis. In the emptiness, the graffiti tags are a reminder that other people have been to this universe of pixels before I got here, that even in the metaverse, people want to make their mark.

“Imagine no limitation to space,” Hung says dreamily; space, after all, is the graffiti artist’s currency. “You could tag the Empire State Building with ‘Berst’,” pipes up Robert, the PR representative. But this game is not set in a city with recognisable landmarks. The aesthetics of graffiti – brash lettering inviting you to think about urban space differently – translates well to the virtual world, but in doing so, it loses some of the specificity that makes the art form unique.

Virtual reality, NFTs, social media companies reinventing themselves as they rapidly lose market share in the crucial youth sector: is the nascent concept of the metaverse enough to unite these disparate digital trends? While the Kingspray graffiti app is excellent technology and fun to use, it’s not exactly the metaverse that Mark Zuckerberg has promised, where you can feel “like you’re right there with people, no matter how far apart you actually are.”

In our interview, Hung describes the metaverse as “interesting”, over and over again. He’s not wrong: it’s interesting that the visual aesthetics of graffiti can be recreated so faithfully in virtual reality. A global public art gallery that anyone could contribute to would be interesting. The idea of digital simulation so realistic that you feel like you’re with someone even when they’re very far away: interesting. “There are so many possibilities,” says Hung, whose art exists in physical space while he thinks about graffiti on digital street corners. Hung is embracing these possibilities: who else will don the headset, buy the app, and explore them?