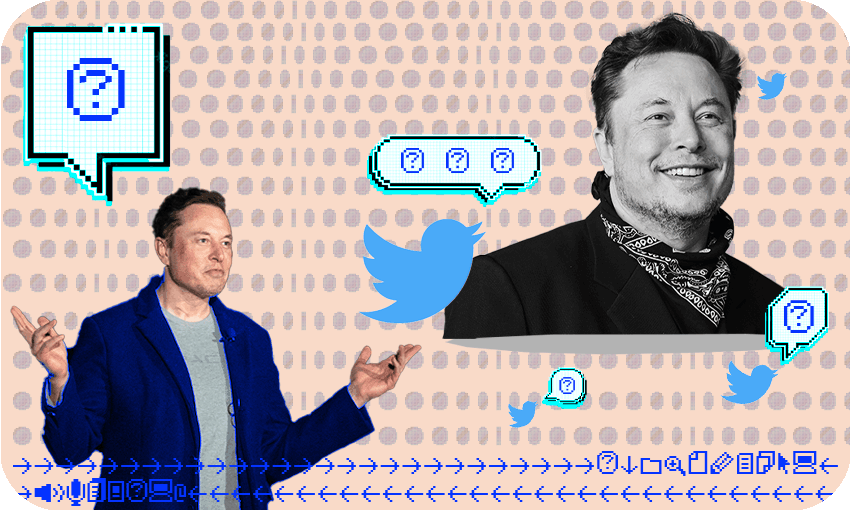 The richest person in the world is buying Twitter. Why’s that a big deal? Josie Adams explains the basics for IRL.

Let’s start at the very beginning. What is Twitter?

For those of you lucky enough to have never visited the Twitter platform, it’s basically a giant noticeboard of Facebook statuses. You can tweet (write a short message and send it out into the world), retweet other people, and reply to others’ tweets with your incisive and valuable opinions.

Perhaps most importantly, it’s one of the largest social media companies in the world – and it’s not run by Mark Zuckerberg. Last year, Twitter had 206 million daily active users worldwide. In New Zealand, the platform is leagues behind the Zuckerberg-owned Facebook, Instagram and Whatsapp in terms of user numbers, but it’s still got more than TikTok – for now.

He’s the man who just bought Twitter for US$44 billion (around NZ$66 billion). The South African emerald mine heir made his first uninherited millions from web startups in the late 90s/early 00s: Zip2, X.com, and PayPal. He’s now known for running Tesla and SpaceX, being really keen on tunnels and using Twitter to get into trouble with both the SEC and Russia.

It’s still a little nebulous, but the endgame seems to be: societal change via free speech.

Musk has said the platform has “extraordinary potential” and he will be the one to unlock it. At a TED conference earlier this year, he described Twitter as “the de facto town square”. He seems to believe taking Twitter from publicly-funded to privately held, and harnessing the power of posting, is his moral duty.

“I believe free speech is a societal imperative for a functioning democracy,” he wrote in an email to Bret Taylor, the chairman of Twitter’s board. “Since making my investment I now realize the company will neither thrive nor serve this societal imperative in its current form. Twitter needs to be transformed as a private company.” He followed up this email with another statement, confirming he would “need to reconsider” his position as a shareholder if the offer was rejected.

He wanted it really, really badly: Musk’s Twitter takeover has been described by outlets as both “hostile” and “aggressive”. He started out buying 9% of its shares, making him its highest shareholder. This caused Twitter to adopt a “poison pill” tactic: it flooded the market with discounted shares for people who aren’t Musk, making it difficult for him to buy a higher stake in the company.

Difficult, but not impossible. Money talks, and $44 billion screams.

Is there no free speech on Twitter? What’s changing?

To some of us, the idea of a Twitter with extra free speech is a little confusing. It’s already got “adult” content, gun salesmen, slurs, and Ben Shapiro embarrassing himself. What more could Musk want?

His concerns are likely centred around Twitter’s growing safety and moderation teams, and the pretty major things they’ve done in the past couple of years: banning US President Donald Trump early last year, and preventing users from posting links to a New York Post article reporting on the Biden family in 2020.

Currently, Twitter allows for what it calls “broad conversations”, but will step in if someone is receiving targeted abuse and harassment. It also labels misinformation, sometimes prompting users to read additional context. It will remove blatant misinformation if its offline consequences could be “immediate and severe”.  Under Musk, such moderation would likely be limited.

At the TED conference he said he’d err on the side of leaving Tweets up instead of deleting them. He’s not keen on permanent bans (such as the one Trump received), and he’d generally be reluctant to delete anything unless it was explicitly illegal. He recognised Twitter is “obviously bound by the laws of the country it operates in.”

On that note, the European Union has warned Musk it will fine or ban Twitter entirely if stops moderating the platform to the degree required by law in its member nations.

Does Musk know what he’s doing?

Musk’s long history of Twitter use implies he understands the platform: shitposting; using it for what looks like market manipulation; fighting with his girlfriend Grimes. Running the show could be a different story. The whole “free speech” thing doesn’t really align with Musk’s history: he’s fired and spread rumours about employees who undermine Tesla’s supposed magnificence and asked employees to sign non-disparagement clauses.

But while the ideological crusade is a little hard for both Musk and the rest of us to grasp, he’s likely more than capable of making the other changes he wants: making Twitter algorithms open source, defeating the spam bots, creating an edit button and authenticating all humans.

To Musk, absolutely. In negotiations he stated he needed to take the company private to achieve his dreams, and was willing to pay a premium for it – which he did, paying 38% over what it was valued.

To Twitter employees, it’s also a big deal. Musk has a history of making big financial decisions based on Twitter polls, and his free speech crusade could result in cutbacks for the hundreds of employees working on moderation and safety. The New York Times reported it had seen an internal Slack message asking if employees were excited about Musk – about 10 people responded with a “yes” emoji. Twitter has more than 7,000 employees.

To those of us who don’t use Twitter, and have no interest in the impulse purchases of a billionaire, it may not be a big deal. But it does show that if you have enough money, you really can do anything you like.