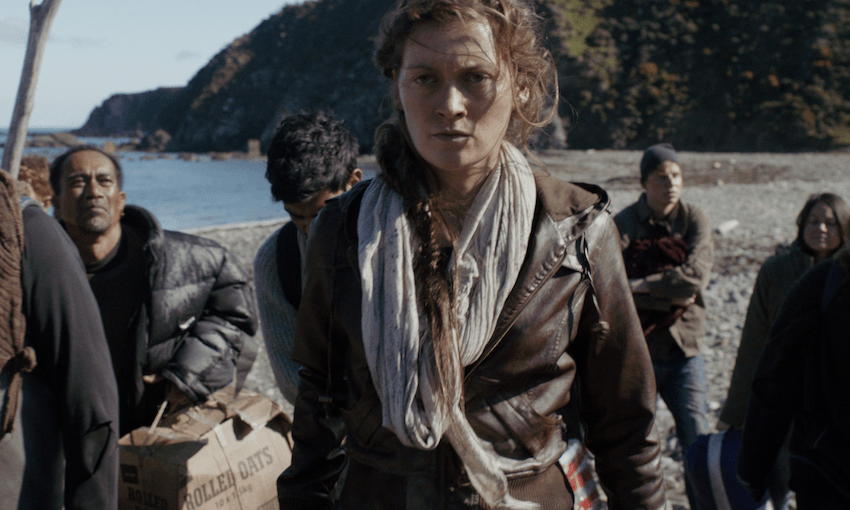 Zealandia: The sci-fi short film that Covid-19 turned into a social drama

Director Bruno du Bois talks about Zealandia, a short film depicting a futuristic New Zealand in the midst of a global pandemic which was written long before Covid-19.

New Zealand’s biggest annual short film festival Show Me Shorts kicks off on October 2, bringing over 75 films from around the world to 30 cinemas throughout the country. A selection of films will also be available to watch online, including Zealandia, a science fiction film set in a virus-free New Zealand during a global pandemic. Sound familiar? It should, except that the world of Zealandia was created years before Covid-19 existed, and the similarities between the fictional and the real-life pandemic are eerie.

Directed by Bruno du Bois and written by Aline Tran, Zealandia follows a woman called Eva who returns to a renamed New Zealand in 2032. An oppressive regime of border control and medical regulations mean Zealandia is the only country in the world free of the contagious disease. But Eva returns carrying a mysterious bag that could threaten everything. It’s a tense watch with a major twist, and thanks to the events of 2020, will resonate with audiences in ways the film’s creators never originally intended.

The inspiration for Zealandia came to du Bois and Tran during the Ebola outbreak of 2014 when cases began to spread from Africa into other parts of the world. Airlines began to cancel flights, case numbers started to rise, and countries began to shut their borders. “We always thought the New Zealand borders were pretty strict,” says du Bois, who grew up in Belgium, while Tran comes from France. “You get a $400 fine if you bring in an apple, so we started to think about what if one day New Zealand closed its border if you caught a cold?”

Filming began in 2016, long before protective bubbles or social distancing were a thing, and du Bois created a world he thought belonged only in science fiction. Production delays meant Zealandia wasn’t completed until early March 2020, just a few weeks before the world went into lockdown. As the real-life global pandemic took hold, du Bois began to notice striking similarities between 2020 New Zealand and 2032 Zealandia.

“It’s completely surreal, because one after the other, we saw these elements taking place that were actually exactly like the film,” du Bois explains, like borders closing, robots replacing humans, and technology tracking people’s movements, which all appear in various forms in Zealandia. “It was mind-blowing to see all these coincidences happening almost at the same time. We joked that we were making a sci-fi, but now it’s more a social drama than a sci-fi film.”

Zealandia paints the picture of a bleak future, a fiercely fortified society where the risk of contamination must be eradicated, regardless of the human cost. Given du Bois’ new powers of predicting the future through his films, is this what he thinks New Zealand will look like in a few years? “I think the fortress is probably going to be at the border, so I would say even today, New Zealand is obviously really strict at the border. Within the country, and we’ve seen this in level one, we are able to live a relatively normal life.”

It’s that relatively normal life that means the short film festival can go ahead during Covid-19, and watching Zealandia during a global pandemic gives the film a layer of plausibility that it would have lacked this time last year. “When we made the film, we just wanted to tell a good story, to have a good twist at the end and for the audience to enjoy watching it. We do understand now that it’s got a different signification,” du Bois says.

“Before, it was a science fiction film, and like plenty of other sci-fi films about a virus, people watch and don’t really think this will happen to us. Now that the pandemic has happened, I think the audience will be able to imagine themselves in the situation a lot more than before Covid-19.”

Zealandia is an extreme place, and given the recent rise of extreme views on social media, is there the risk that conspiracy theorists will take the vision of Zealandia and run with it? “I can maybe see people in conspiracy territory trying to take the film and maybe picturing it as what could happen in the next few months or years, but I don’t think we’ll get to that,” says du Bois, adding that he’s looking forward to New Zealanders seeing the film, especially after cancelling the cast and crew screening twice due to lockdown.

“People joke that we planned the whole thing, that it’s a big marketing plan to promote the film, which obviously it’s not,” he says. “Now I’ve got people asking me ‘what else is going to happen in the next few months?’ because it’s mind-blowing the similarities between the film and the reality.”

The Show Me Shorts Short Film Festival runs from October 2-28.