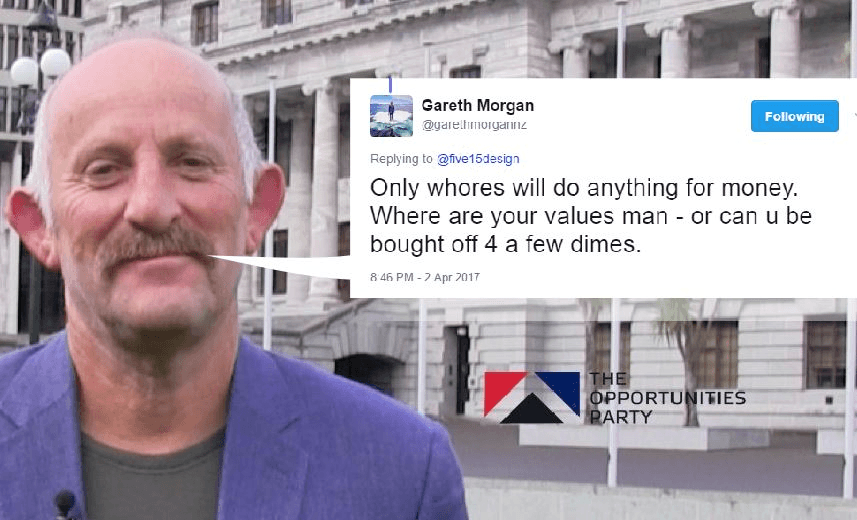 Just another Sunday night for the fund manager, philosopher and new political party leader, discussing the issues with the people on social media.

Yesterday on Q and A, deputy PM Paula Bennett dismissed the idea of a tourist tax. Gareth Morgan, leader of the nascent Opportunities Party, didn’t like that, particularly given the behaviour of some freedom campers.

He tweeted this displeasure, in three parts, like this:

That’s not even on point. It’s nothing to do with cost, it’s about crap people, crapping on us with contempt, bottom feeders & bleeders

Proper policy response? Ban camping in public places if not in self-contained camper. Take their vehicle, deport a couple as example.

And then some people responded and he, well, he engaged with them. Forget about what they said, just read his, well, engagements, all 42 of them, unexpurgated, across two hours from 7pm last night:

What’s your address – can they come and shit on your lawn?

mate the point is simple – visitors shouldn’t crap in our public places. Are  u suggesting we should just wipe their bums & say welcome?

“casual” is not about crapping in public places.

Thank goodness for someone with a spine

No. But saying enviro care must be bundled with socialism is disingenuous. Growth & enviro enhancement should go together – not difficult

The point was they were crapping on the ground behind the toilets – because they were occupied.  I have bag for my dog’s doo daas

A plastic bag to pick up your shit is not expensive.

the trivialisation of defeat

No it was about respect for the host, idiot

Was waiting for that last tweet, “profit” is the problem. I rest my case

What’s wrong with a plastic bag in such cases, or a spade. No excuses

Profit is NOT the problem, that’s the response of a socialist. The prob is polluters do not pay, taxpayers do.Please don’t blame capitalism.

No it’s not. “Casual” is fine, there’s no excuse for crapping without disposal. Stand up for your fellow NZdrs. Or don’t u give a shit?

Agreed. Need to set a couple of high profile examples then compliance soars

in a bag or dug a hole. U too lazy for that?

No it’s about communicating enforcement. That improves behaviour & minimises cost of enforcement. U happy to fund lots of wet bus tickets?

Read our enviro policy on polluter pays. profits plus enviro enhancement. ECON 101. Prob has been & remains illiterate politicians. Not hard

Yes by introducing polluter pays. This is where Greens are out to lunch

Or any other disposal method – like a spade. What is so difficult about being socially responsible, caring?

You’d only have to do it once. The message would be clear. Bulk up

Don’t be so limp. Or if that’s your predilection, go clean it up you wimp

Only have to catch one to make the point. Compliance after that would be total (and enforcement cheap)

How can you differentiate a Kiwi shit from a foreign one? Visitors shouldn’t have the same rights anyway. Kiwis just get a big fine

That’s ridiculous. U saying residents should have all rights of citizens? ie; straight on to welfare? ACC free ride 4 all tourists? Nutty

Only whores will do anything for money. Where are your values man – or can u be bought off 4 a few dimes.

U only have to set a couple of examples & then compliance would be total.

We only want their money, don’t get it wrong. We expect civil behaviour – well some of us do, others happy 4 them to crap everywhere. Weird

U clearly didn’t see Bennet so aren’t even informed 4 this. She said they crapped beside the toilets Dumbkopf. Inform yourself b4 u blab

Slightly off topic – but hey this is the public. The point is money isn’t the ultimate, we have values. Even if you’d rather just have the $

Expletives suggest you’ve let the discussion go past u. Will u do anything for the tourist $? If so there’s your values, right there

The issue is stopping uncivil behaviour. Not having the bottle to stand up to it really is weak. U haven’t offered any credible response

The Phoenix just won – it’s intoxicating. Given it’s so rare

How PC. The point is money is not the God here- we have many who won’t stand up to being shat on. U ok with that?

Well they’re saying they’ll do anything for tourist $, don’t care at all about uncivil behaviour by tourists.Desperate for the $ it seems

Wrong wrong wrong. The Minister said they shit beside the toilets. Get your facts right if u want to participate here

Well if you’re so easily incensed, you’re not sufficiently robust for the struggle I’m waging. Super PC will get u nowhere

(He continued into the night, but we couldn’t)