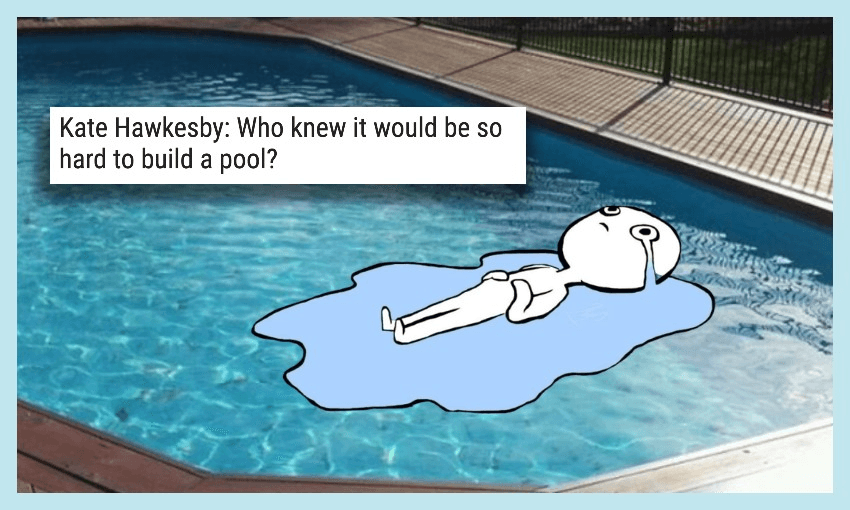 Government expected to take urgent action to stave off public demonstrations over a delay in putting pool in.

New Zealand’s recent run of troubles began with the ravages of the Covid-19. Next came a cost of living crisis, its devastations fed by the economic fallout of the pandemic and Putin’s invasion of Ukraine. And today, If there were any doubt that bad things come in threes, another calamity: Kate Hawkesby is having to wait a bit for a new pool to be put in.

Already things were feeling bad all the time. Now they feel worse even aller of the time.

In an exposé-cum-thinkpiece for Newstalk ZB, the Auckland resident laid out the new reality in unflinching, wintry detail. All they sought was “just a pool and the obligatory pool fence,” she wrote. “We had an engineer draw up the specs and submit it to council, routine procedure, nothing to see here. Then, to our surprise, the council comes back a couple of weeks later and says not only do we have to apply for building consent to build a pool, but now also a resource consent.” The council also expected money for their so-called consents.

The cost-of-putting-a-pool-in crisis, which is almost certainly Meghan Markle and Jacinda Ardern’s fault, is expected to bring a swift response from ministers that have in recent weeks been locked in the parliamentary basement gluing toilet paper tubes to chalk to solve the plasterboard crisis. In the face of what some are calling a poolocalypse and against a backdrop of polling that underscores the government’s failure to frame a compelling narrative among New Zealanders who just want to put a pool in, a domestic pool taskforce will be assembled to consider new measures including a “turquoise” traffic light setting as part of an effort to placate an increasingly radicalised community of people who want to put pools in.

A spokesperson indicated announcements about timings for future plans could be expected to be revealed in the coming days.

“The nightmare that ordinary Kiwis face in trying to get a pool put in reveals just how our economic woes have deepened,” said one leading economist, who added: “And also the shallow end.”

Unconfirmed reports suggest desperate and disoriented New Zealanders unable to have pools installed have begun swimming in their cars or attempting to paddle in soup kitchen bowls of soup.

Policy-makers will struggle to persuade the public that they were caught unawares by the pool crisis, given the warning issued earlier this year by one community activist (Kate Hawkesby). Alighting on the supply chain delays, she declared, “We have to wait a year to get a new home pool,” five months ago.

In that essay, Hawkesby set out the hardship involved in pool ownership, laying bare the practical and emotional labour that can be overlooked by those who have large staffs to look after their pools. They can be “high maintenance costly experiences which never actually got used as much as you thought they would,” Hawkesby wrote. “Kids always promise to swim every day and then when you get a pool suddenly they’re too cold and don’t want to. My husband reckoned cost per swim was about ten grand.”

That’s not all. “They can sit empty and unused for many months, all the while you’re paying a fortune to maintain them. On top of that, many families travel during the summer school holidays so that’s lost time in the pool too.”

Those reasons, together perhaps with the lasting traumas detailed in 2018 of attempting to actually rent a property to live in and encountering – content warning – “missing pool tiles”, meant that Hawkesby resisted putting a pool in until expensive overseas travel was off the menu. Now she’s left with a plan to build a pool, open borders and a national airline that refuses to put her pool on a Dreamliner.

Only the naive, meanwhile, would imagine that the pool crisis has no flow-on effects. In an example of what economists call the chlorinated trickle-down effect, pool expenditure is reassigned to other essential goods. Hawkesby explains that her unnamed husband responded to the pool crisis revelations with a dirgeful, “Cancel the pool. I’d rather buy a Ferrari.” Isn’t that what we’re all thinking? And if we are, how long until we face the fourth unimaginable reality – not only is there not enough Gib board to go around, but good luck to you trying to get hold of a 620 cv V8 Portofino.