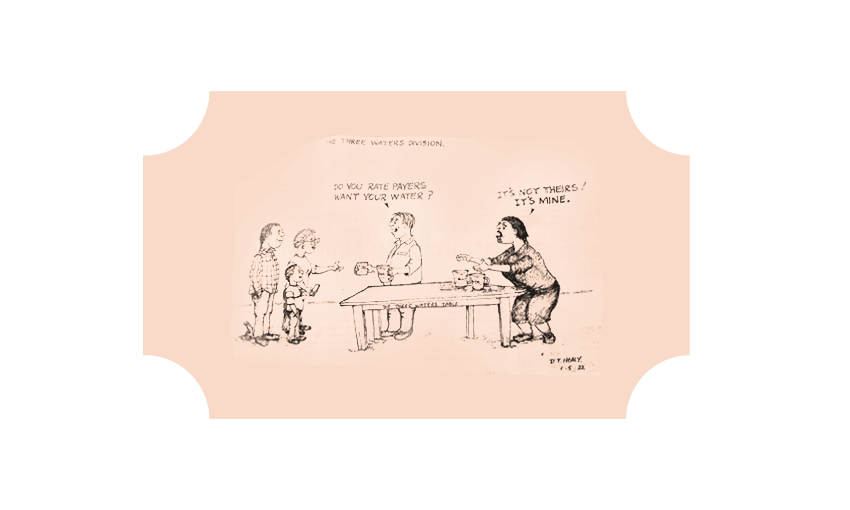 A cartoon published earlier this month in the Greymouth Star used what’s been described as a ‘racist caricature’ to depict government minister Nanaia Mahuta. But the artist says it’s not offensive. Stewart Sowman-Lund reports.

The Greymouth Star, a daily newspaper servicing the West Coast of the South Island, is facing condemnation after an allegedly racist cartoon published earlier this month resurfaced online.

The cartoon, dated May 1 this year but shared to Twitter yesterday by left-wing commentator Clint Smith, purports to comment on the three waters proposal and its surrounding debate.

I can't believe it's 2022 and newspapers are still printing cartoons with racist caricatures of Maori, and portraying them as greedy thieves taking from Pakeha

From the Greymouth Star

While any cartoon depicting the contentious three waters debate is likely to spark debate, the drawing is provoking anger online both for its political commentary and its depiction of Māori.

In the cartoon, a family, clearly shown to be Pākehā, stand at one end of the “Three Waters table”. At the other end, there is a woman with a moko kauae, ostensibly meant to represent local government minister Nanaia Mahuta.

“Do you rate payers want your water?” a person standing in the middle of the table asks the Pākehā family.

“It’s not theirs, it’s mine,” replies Mahuta. She’s already holding on to two mugs labelled “water” and looks angry.

The planned three waters reforms, in which the government intends to consolidate wastewater, stormwater and drinking water under four umbrella entities, has proved controversial and faces staunch opposition from the National and Act parties. Māori will not own any water under the reforms.

Many readers did not identify the Māori figure in the cartoon as being Mahuta. Twitter users were quick to comment on both the cartoon’s misrepresentation of the three waters debate and its outdated and offensively caricaturistic depiction of Māori. “I can’t believe it’s 2022 and newspapers are still printing cartoons with racist caricatures of Māori, and portraying them as greedy thieves taking from Pākehā,” wrote Smith, the original sharer.

“Hey @GreymouthStar do you really think this is OK?” asked another. “It’s racist. And incorrect. And really racist. And wrong.”

Toby Morris, author of The Spinoff’s comic web series The Side Eye, said everything about Healy’s illustration felt wrong. “It’s outdated, racist and just plain incorrect,” he said. “You have a duty as a cartoonist to give your opinion, but you’re going to make a fool of yourself if it isn’t at the least an informed opinion. The artist clearly doesn’t understand what three waters is actually proposing, and I suspect the editor doesn’t either.”

On Twitter, the Herald’s cartoonist Rod Emmerson similarly questioned how Healy’s cartoon was published, and anticipated wider condemnation. “I’ll be amazed if this doesn’t end up in the jaws of the media council and [Human Rights Commission],” he said. “Foundation of any political cartoon is facts – and this is factually incorrect… Plus the tone is racist.”

On being approached by The Spinoff, Meng Foon, the race relations commissioner, avoided labelling the cartoon as racist. However, he told The Spinoff it was “unhelpful and counterproductive” when groups of people were pitted against each other. “We should all rise above the use of divisive language and steer clear of stereotypes and sentiments that negatively frame whole communities,” he said.

“The addressing of historical grievances that have led to current inequities is a must and should not be feared. The building up of all people groups is a positive for Aotearoa New Zealand.”

It’s not the first time Healy has tackled the three waters issue through cartoons published in the Greymouth Star and its sister publications, the Hokitika Guadian and the West Coast Messenger, which are all owned by South Island publishing company Allied Press. “It’s not your water, Mahuta”, said one published in the Greymouth Star in 2021. “You may frighten the sheep, but not me.” The cartoon unflatteringly depicts Mahuta in a pool of water, surrounded by sheep. Another jokingly claims the government also wants to control rainwater.

Healy has also used his cartoons to comment on other topical issues in recent months. Several verge on Covid-19 misinformation, such as one also published in the Greymouth Star that labelled Covid-19 vaccination mandates as “segregation” and another, shared on Healy’s social media, that linked the government to the spread of the omicron variant.

A number of cartoons by Healy have targeted environmental issues, such as SNAs, and conservation minister Eugenie Sage. One from 2020 jokes about Sage being eaten in a hāngī (in the Facebook comments on his own page, Healy says she would “probably taste like an old bat”.)

These cartoons have been published largely without comment. In fact, Healy’s past work is only now being scrutinised after Smith posted the three waters illustration online.

The Spinoff asked Healy whether he stood by his depiction of the Māori figure in his cartoon. “The cartoon is no way racist or even intended to be racist,” he said. “It depicts the representative of three waters, which happens to be [Nanaia] Mahuta.”

Healy said putting Mahuta in the cartoon was accurate. “If I’ve offended people who see it in a different way I apologise.”

Newspapers in New Zealand have a long history of publishing objectionable cartoons. Stuff artist Al Nisbet, whose works often depicted Māori and Pacific people, was dumped by the publisher in 2018. A year later, the Otago Daily Times apologised after a cartoon by Garrick Tremain made light of the Sāmoan measles epidemic.

At the time, the cartoon was widely condemned by Tremain’s colleagues at the paper, as well as readers. Over 130 Media Council complaints were laid and Tremain was ditched from the publication, which is owned by Allied Press, which also owns the Greymouth Star.

No complaints about Healy’s publication have so far been made, the Media Council told The Spinoff. In a 2019 ruling, the council noted complaints against cartoons were “rarely upheld” as they “are given a wide licence to offend”.

Neither Allied Press nor the editor of the Greymouth Star has responded to The Spinoff’s request for comment.