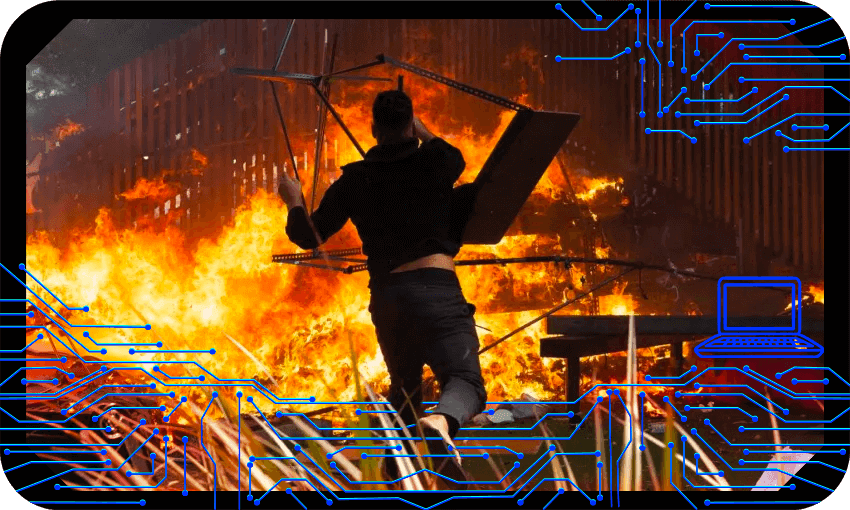 A fire burns on the final day of the parliament occupation. Photo by Marty Melville / AFP via Getty Images; design by Tina Tiller

A fire burns on the final day of the parliament occupation. Photo by Marty Melville / AFP via Getty Images; design by Tina Tiller

The 23-day occupation of parliament grounds, which came to a fiery, violent end 11 weeks ago,  engendered – and fed on – an unprecedented surge in the sharing of disinformation and conspiracy theory across digital platforms in New Zealand, according to new research from The Disinformation Project. The working paper, which draws on analysis of tens of millions of social media posts and comments and many hundreds of hours of online video, finds that those in the “misinformation and disinformation ecologies” were able to outstrip mainstream media audiences online, with as few as a dozen figures responsible for the vast majority of the material shared.

For those who had been monitoring the online activity in these groups, the violent end of the occupation came as less of a surprise than it did to many, said Kate Hannah, director of the Disinformation Project research group and co-author of the paper with Sanjana Hattotuwa and Kayli Taylor. “In many ways what we saw was what we would have expected to see – including the tensions between the different identities of the groups,” she told The Spinoff.

“We’d been seeing the small movements, the tremors, building up towards this linking up of what many people had thought to be quite disparate viewpoints. It became really clear that it was only partly about vaccines and vaccine mandates, and there were significant other things that it was about for the key producers of content.”

Both online and on the lawns of parliament, it was notable, said Hannah, that the ostensibly more “ordinary” groups did not push back, for example, at toxic and misogynistic expressions. “The ‘peace and love’ stuff, which was very much attempting to be the dominant narrative, is something that was also very present across some of the places that we study online. But increasingly it had started to become more questioned by some of the louder voices who were not into the peace and love vibe,” she said. “It became clear to people watching and participating that it was not just a collection of people who had lost their jobs, it was not just about vaccine mandates.” When groups such as Voices for Freedom, the large-scale anti-vaccine group, did not denounce the extremist messages online and from the protest stages, “it reinforced to both those present and those outside that these two seemingly split sets of ideas are actually layers upon each other”.

Within disinformation networks linked to the events at parliament, talk about Covid-19 and the pandemic response had performed the role of “a Trojan Horse to push followers towards more violently exclusive, supremacist, xenophobic, racist, far-right and extremist ideologies”, the paper found. While at the outset, discussions around the Convoy – the catalyst of the wider occupation – were “more moderate” across online channels, they became “pushed aside and replaced with extremist narrative frames, including calling for the weaponised storming of parliament, the execution of public servants, academics, journalists, politicians, and healthcare workers”.

Analysis of Facebook content on the two most tempestuous days of the protest action showed misinformation purveyors outperforming mainstream media in reaching online audiences, the paper found. On February 10, which saw the first arrests as protesters and police clashed, the misinformation pages studied by the Disinformation Project generated 252,917 interactions, while New Zealand mainstream media pages on Facebook clocked up 230,624.

It happened again on March 2, as police moved to clear parliament grounds. This time, misinformation accounts saw 357,089 interactions, comfortably more than the 247,620 for mainstream media pages. A similar pattern emerged in video posted on Facebook. On February 10 and 11, misinformation producers’ coverage was more widely viewed than that posted on the platform by mainstream media combined.

All taken together it constituted a “tectonic shift in the country’s information and media landscapes”, the paper’s authors concluded. It was “evidence of an entrenchment of splintered realities in under a month, with spikes in engagement closely aligned with offline developments, led by police enforcement actions”. Two distinct depictions of the events at parliament emerged online: “Depending on which ecology they trusted as providing a true and accurate capture of the parliament protest, New Zealanders were presented with radically different narratives of the protest, at complete odds with each other.”

Social cohesion and other social bonds were threatened by the emergence of those splintered realities, in which “significant sections of the country’s population” turned to disinformation channels as their primary source of information.

A series of Covid-prompted responses across the previous six months, including lockdowns, vaccines and mask-wearing, had “in many ways been the making of those groups and individuals”, said Hannah, “in terms of their presence, their impact within the community, how much they are listened to, and how much they broadly self-reference each other. There is some in-fighting, but it’s now quite easy to a large extent for people within that community to only get their information from that set of sources.”

One local misinformation-riddled account soared above the others in popularity and reach. The influencer-style Facebook livestreams posted by Chantelle Baker took the first and second rankings among all pages on the platform across the period March 1-3, the working paper found. “TDP had never before studied a single misinformation super-spreader account on Meta platforms dominate engagement in mis- and disinformation ecologies, and furthermore, eclipse engagement by the country’s mainstream media on the same platform.”

Instagram, an app more typically associated with beauty, food and lifestyle content, had its own important place in the misinformation networks linked to the protest. Across the 23-day occupation, misinformation accounts studied by the researchers on Instagram generated greater engagement than the accounts of mainstream media. Follower numbers for misinformation-propagating Instagram accounts saw audiences growing by almost 90,000 – more than the growth of the previous five months combined.

For Baker and others, the reach of products like Facebook and Instagram into the mainstream population made their place on those platforms a huge advantage, said Hannah. That was evidenced, for example, by the repeated efforts by Voices for Freedom to regain a foothold on Facebook at least four times after repeated bans. “All of the key producers attempt and reattempt to get themselves back on to YouTube, Meta products and Twitter, because they know that is where you recruit people from. You’re not recruiting people from Telegraph, they’re already there.”

The rise of Telegram

A refuge for users banned from more mainstream channels, Telegram had its place in the New Zealand misinformation mix cemented across the occupation. The social media platform, which the authors assess as a “significant wellspring of harms in Aotearoa New Zealand”, saw a boom in subscribers. Across the channels studied by the Disinformation Project, the total number of signed up users increased from just over 270,000 in late January to more than 353,000 by March 4.

Imported ideas were widespread across the local Telegram channels analysed. There was evidence of “not just fundamentally different vocabularies, but diametrically opposing worldviews”, the authors wrote. “Mis- and disinformation ecologies are heavily laden with conspiratorialism, Covid-19 denialism, and other harms, including from QAnon wellsprings in the United States, imported into Aotearoa New Zealand.”

That continued in the channels to this day. Remarkably, perhaps, for individuals who identify as members of a “freedom movement”, a wave of material on the invasion of Ukraine is overwhelmingly in support of the regime led by Vladimir Putin. Baker is among those who have posted material amplifying Russian disinformation, including a Facebook video on the “the false claim of bio-weapons factories in Ukraine constructed and funded by the United States”.

On Telegram, meanwhile, “by the end of March, in what was a sustained and stark content signature, every domestic channel studied had pivoted to a near-exclusive framing of the Ukraine war through pro-Putin and pro-Kremlin frames”, the paper noted. “QAnon conspiratorialism and content on these channels and pro-Putin propaganda was a distinction without a difference.”

As the days since the occupation’s end tick over, amid imported rhetoric, disparate targets and across a panoply of platforms, how can the disinformation hazard be confronted by regulators? “It’s very, very difficult,” said Hannah. “But the current framework deals very poorly with reporting of material, even when it is individuals being targeted. There are potentially some things that could be done quickly and transparently in the next six months to patch some gaps, while we continue to go through the media regulatory review and think about things like the legislation that is the Harmful Digital Communications Act, which is simply not fit for purpose in terms of the kind of digital communications that take place in 2022.”