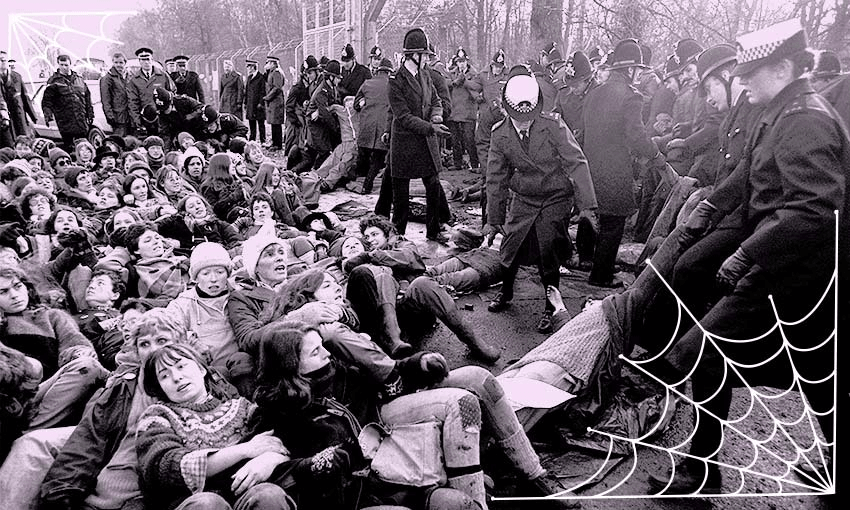 The web of ordinary women who helped end the cold war

The documentary Mothers of the Revolution tells the story of the remarkable female-led resistance against nuclear weapons in the 1980s. Charlotte Muru-Lanning considers what we can learn from this largely overlooked movement.

In early 1981 the British government announced it would allow American nuclear missiles to be kept at an airbase at Greenham Common in Berkshire, a county west of London.

In autumn later that year, 32 women marched from the Welsh capital, Cardiff, to Greenham Common – a 32 hour walk – to protest the decision. The frightening prospect of having just four minutes to say goodbye to their children in the case of a nuclear air strike was the spark that would ignite into a decades-long resistance action – one that from the start was explicitly women-only.

Evolving from very legitimate fears shared at the kitchen table to a nuanced, global movement against nuclear testing, not only did the Greenham Common protests help to change history, they made the point – radical in 1980s Britain – that a woman’s place was not in the home, but at a protest.

Mothers of the Revolution, a documentary directed by New Zealand filmmaker Briar March, sheds light on the remarkable story of the protest – a story which, at least until now, has remained largely untold.

To someone who wasn’t there, the idea of hundreds of women uprooting their lives to move into protest camps – sometimes for years on end – must be hard to get your head around, admits Zohl de Ishtah, who took part in the protests and stars in the documentary. Though the cold war was only a few decades ago, and ended only shortly before I was born, I reckon she might be quite right. “It was an entirely different world,” she says.

Originally from Australia, de Ishtah turned up at Greenham Common on her bike. It was her 30th birthday. “I got there and I knew that I was home,” she says of the peace camp that occupied the outer ring of the military base.

While nuclear war wasn’t an explicitly women’s issue, it was a uniquely women’s protest. “The strength of Greenham,” says de Ishtar, “was that we were women only”. The ways that femininity and the maternal drive to protect children were weaponised for impactful and wide-reaching change are lessons made clear in March’s documentary.

Strategically, being women-only made Greenham special. “Because they were women, they were just often not taken seriously,” says March. Ironically, that often worked in their favour: their resistance efforts often flew under the radar and they were less likely to get caught. “That was one of the things that made them stronger and more successful,” she says. At the same time, their gender was used to demonise them as unfit mothers and even sexual deviants.

In stark contrast to the near theatrical masculinity of 1980s military powers, the protest was unabashedly and joyously feminine. This contrast is strikingly depicted in Mothers of the Revolution. Nappies, photographs of babies, streamers, children’s toys, rainbow-coloured wool and flowers were tacked onto the metal fences that surrounded the military base. Pantry staples eggs and flour were turned into wet pink dough – named “gloop” by the protestors – for throwing at politicians. Perhaps most importantly, the peace camps operated not under the strict top-down hierarchy typical of most political organisations, but as collectives: every woman had an equal say.

The unique aesthetics of the Greenham protests meant “potently rich visual material to work with,” says March. The film layers on a feminist punk soundtrack, zine-like animations and subtle references to imagery like the spider web, a  recurring symbol across the Greenham movement.

During her time at the camp, de Ishtar played a pivotal role in forging a link between the Greenham protestors and indigenous activists elsewhere in the world. In the Pacific, nuclear testing, uranium mining and dumping had long been impacting women. One of the most severe consequences was in the Marshall Islands, where radiation had led to women having babies with sometimes severe birth defects.

The interactions between indigenous women – including Māori activist Titewhai Harawira who travelled to Greenham – and the UK protestors changed the Greenham movement forever. “Greenham women had open hearts,” de Ishtar says. This emphasis on intersectionality encouraged the British women to take ownership over their part in colonisation, she says.

“They really shook up the British peace movement like “hey, you like you know, you might think that it’s all happening here but it’s actually been happening out there for a very very, very long time. And you’re gonna have to get over this and understand that you need to listen to us.”

At the time of the protests, the world was split into two, with western capitalism, represented by the United States and Great Britain on one side, and Soviet socialism on the other. Nowadays we know which side won, and the losing side might seem like a strange relic of the past. But back then, both were seen to be viable systems and were engaged in a potentially planet-threatening battle of economics and ideology.

So while it might be hard from our contemporary perspective to grasp the exact nightmare of the 1980s nuclear threat, it’s not entirely dissimilar from the threat posed today by global catastrophes like climate change or Covid-19.

Mothers of the Revolution is about ordinary women who changed the trajectory of the world for the better. Who arguably, helped save humanity. And like much of history, it shows that it’s not about individual heroes – change is made by unity. That’s a lesson we should take forward today.

Mothers of the Revolution is screening in cinemas nationwide from today