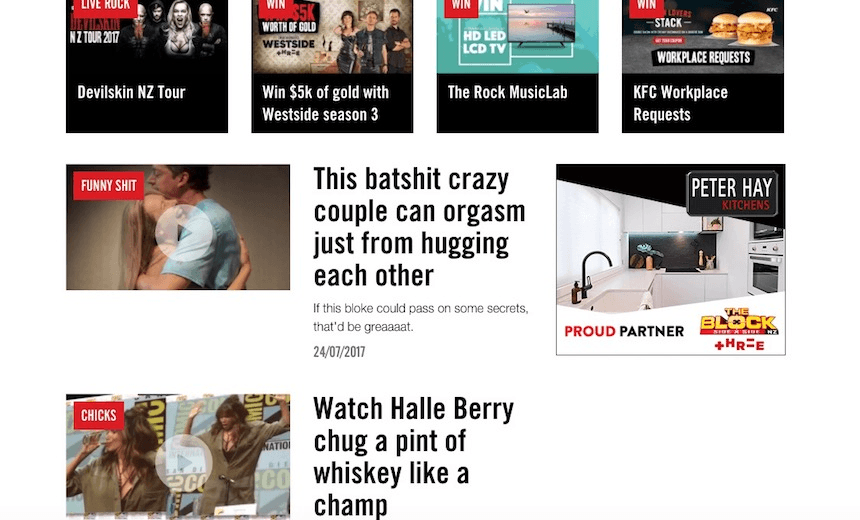 The Spinoff Reviews New Zealand #41: the website of radio station The Rock

We review the entire country and culture of New Zealand, one thing at a time. Today: In celebration of Thane and Dunc’s anniversary party – held tonight at an Auckland strip club – Emily Writes reviews The Rock’s website. Because usually she loves The Rock.

My husband has listened to The Rock for as long as I have known him. For a long time I listened too. I am a card-carrying bogan after all. I named my children after Dio and Eddie the Head. I’ve seen Airbourne six times when surely they don’t warrant that. In fact (pre-kids of course) I gifted my bra to the lead singer of Airbourne after interviewing him for a news agency I worked at. I never wrote up the interview because I was extremely lazy and used to often lie and say I worked at a news agency so I could interview singers in bands.

I once interviewed the lead singer of Gwar and he stayed in character the whole time and we talked about his “throbbing member” but the New Zealand Herald censored me and wouldn’t allow me to say “erect engorged lady hammer” in an interview.

So, I should like the website for The Rock. I mean I still have to listen to The Rock every time I’m in the car with my husband as he has a stupid rule that whoever is driving gets to control the stereo and the last time I drove a car I jumped out of it. That was during my driving test so you know, not ideal.

I mean – I sincerely love that one post celebrates Bryce Casey becoming a dad and provides advice on parenting while another post right next to it gives advice on how to give a mean lapdance. Parenting and pole dancing are both challenging so I feel like maybe this is some meta-commentary and I’m the dumb one who just can’t see it.

That’s not the only beautiful juxtaposition on the site either: how about “Watch Chester Bennington’s last performance” and then right after you can look at a playground made of dicks. The Rock would have published my dick interview with the Gwar guy. They love dick content. Who doesn’t?

Really, the clickbait on their site is beautiful. A bloke hasn’t had a drink of water since the ’80s? I must know why! I must know the story behind this. A couple can orgasm by cuddling? What the?! Great White Sharks? Sign me up! As someone who last night somehow ended up watching a 25 minute YouTube video compilation of snakes following a tractor, this is exactly the content I want in my life.

But why, oh why, is there so much white and black on this website? I mean, I know black is the colour of the bogan flag – I wear it proudly – but the white and grey on black is killing my eyes. Especially when everything else is demanding my attention in massive font. What am I meant to look at first?!? What is the Daily Dump?!?

The banner for the page keeps catching my eye because I never knew DevilSkin had identical twin dads in it. I have created a backstory where they’re just two brothers in a metal band and the guy behind them is the wayward teenager they adopted as their joint son at a gig at Valhalla and the one on the left is the “nice dad” and the one on the right is the “cranky dad” and Jennie Skulander is their wild but with a heart of gold sister and they’re all just trying to make it as a family in this modern age and try to keep young Geoff out of trouble. What a sitcom! Wouldn’t you watch it?

But the true beauty of the site is in the WIN section. I mean, the Rock has never been a particularly chick-friendly place. I mean bitches amirite? But Thane and Dunc seem absolutely dead-set on making The Rock a NO FEEEMALES man cave of the most masculinist mannishness that is possible. The radio-friendly and actually uh friendly combo of Jono and Ben has been replaced with the OMG STRIPPERS RIGHT BOYZ GET IT ON BOYZ TITS OUT FOR THE BOYZ TITS OUT FOR THE BOYZ duo and so every other part of The Rock website is women wearing not much and pole dancing. Which, you know, I don’t know if I’m even complaining here.

It’s like do I love this or do I hate it? Do I think it’s hilarious that over on planet real world we have discussions about how social media is causing mothers to feel they can’t measure up because of instagrammed lunchboxes and over on The Rock Dot Net Dot NZ they have a calendar called Yo Mamma and it’s just hot mums in bikinis who are nominated by their husbands?

I have been told multiple times that boys don’t look at each other’s penises when they’re in the bathroom but I’m convinced that Thane and Dunc and their listeners do. I can’t help but think that they stand next to each other and say – “Hey man, great dick NO HOMO”. And that makes me feel… good? Because we need to encourage men to share their feelings with each other and if that starts with dicks then that’s a good thing and I support it. It’s like how people say a flash car is a penis thing. This whole website is a penis thing. Thane and Dunc’s birthday celebration tonight is at a strip club which is very like BLOKEY MAN MAN BLOKE so I think the message is clear.

Even if they say: Everyone’s welcome! But: maybe everyone is welcome? Maybe this is all me? Maybe I’m having an existential crisis? Maybe the font did this to me? We will never know.