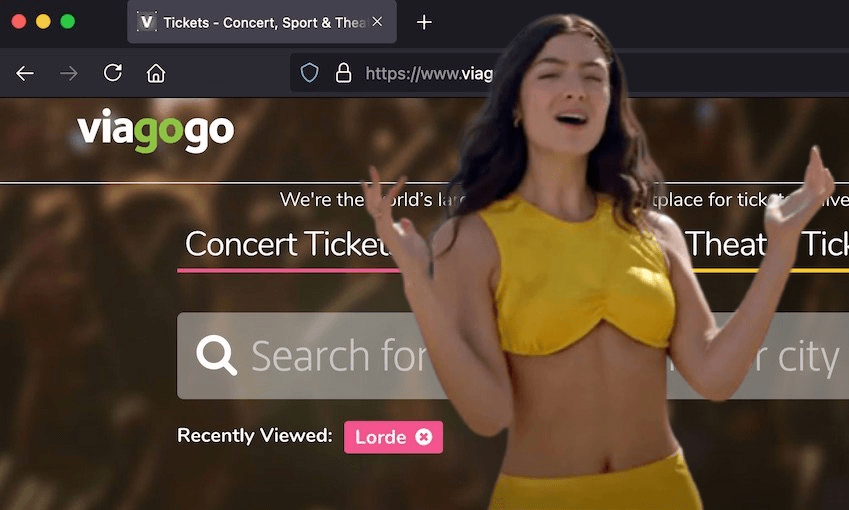 Trying to nab tickets for Lorde’s New Zealand tour? It pays to watch where you’re buying your tickets from, says Chris Schulz.

Lorde emailed me on Tuesday night. Well, not me specifically. I’m not that important. I don’t personally know Lorde. But she emailed everyone in her fan club database. Yes, I’m a member. Yes, I’m 43 years old. Don’t @ me.

“Dancing together in summertime” wrote Lorde in the subject line. Summer’s hard to imagine right now after waking up to 2-degree chills and frozen grass, but sure. Pass the fennel bong.

Inside that email was the pre-sale code to buy tickets to Lorde’s upcoming New Zealand tour. With six dates in outdoor venues, it’s the pop star’s biggest tour here yet, all shows being played on the back of her summery new single ‘Solar Power’ and an accompanying album of the same name, due for release on August 20.

Lorde hasn’t played any concerts here since a couple of intimate gigs at The Powerstation in 2017. She’s our biggest ever pop star, one who has headlined huge international festivals, including Coachella and Lollapalooza. After Six60’s recent monster trek, this is the largest local tour by any musician since Covid-19 shut down our borders last year. Demand for her tickets, as you’d expect, is pretty high.

Perhaps that’s what led Lorde to include a subtle warning, alongside the pre-sale code word, in her email. “You know the drill,” she wrote. “Good luck out there.” Those words sound like the tired sigh of a musician who knows what her fans are up against, someone who knows she can’t do anything about it. It is how it is.

It took seconds for Lorde’s pre-sale tickets to start getting snapped up when they went on sale yesterday. It took just a few more seconds for those same tickets to pop up elsewhere too.

Google “Lorde tickets” and lo and behold, the first website listed is our good old concert ticket companion, Viagogo. Like a pesky virus you just can’t kill, Viagogo keeps on keeping on. Yes, it’s the same Viagogo that messed up many a night for Adele’s New Zealand fanbase in 2017. It also caused havoc for Ed Sheeran’s Australasian fans in 2018.

It’s the same Viagogo that the Commerce Commission took to court and, in March, 2020, claimed a small victory over. That court case is still ongoing, but the result forced Viagogo to remove all claims that its tickets are “100 per cent guaranteed”. The Swiss company has finally admitted that its business also falls under New Zealand law. This is important.

“Until now Viagogo has said it is not answerable to the courts here, which has led to considerable expense and delay for the commission. We think a company that sells New Zealand event tickets to New Zealand consumers should fall under New Zealand law, and we are pleased that Viagogo now accepts that too,” Mary-Anne Borrowdale, the commission’s general counsel for consumer and competition, said at the time.

That capitulation hasn’t stopped Viagogo from selling tickets. It’s offering plenty of them. Click on that Google result and you’ll be directed to a page that looks entirely legitimate. It lists all of Lorde’s New Zealand tour dates in order: a headlining performance at Christchurch’s really rather good Electric Avenue festival on February 26, followed by shows in Nelson, Wellington, Havelock North, New Plymouth and Auckland. Want to go to one of her Australian tour dates? They’re listed too.

Look a little closer, and you’ll see a few things are awry. Sure, the concert dates are correct. But some of the smaller details are not. The capacity at Wellington’s Days Bay is listed at just 250 people. I’m not sure what the exact crowd capacity is, but I can assure you Hutt City is not putting traffic management and electric ferry plans in place for just 250 people. Havelock North’s Black Barn Vineyards’ capacity is also listed at 150, when it’s closer to 1800.

That’s not all. Lorde’s listed as playing Western Springs Stadium with a capacity of 50,000. The capacity is correct, but the venue’s wrong. She’s playing on Western Springs’ Outerfield, the grassed area you can see as you drive past the venue. That’s closer to 20,000 people, less than half that size.

Thanks to Lorde’s email, I managed to get into a 10-minute queue and purchase two tickets to her Auckland show when they went on sale at midday for $109.90 each, plus another $8.46 for payment processing and levies, and another $5 for order processing. Complaining about those fees is another story entirely. I’m not doing that here, but they are outrageous.

On Viagogo, those same tickets are $175 each, plus fees. Other shows have an even bigger mark-up. In Wellington, they’re $196, nearly double the original price of $99.90. In New Plymouth, they’re $292, nearly triple. After VIP tickets? I can’t find any available in the official Ticketmaster pre-sales, but on Viagogo they’re offered in several venues for $1349 each.

As I clicked around Viagogo, I noticed something else. Urgent messages kept flashing up. “Sixteen people viewed this event in the past hour,” read one. “Last tickets remaining in section,” said another. “Demand for this event: High” and “Get it or regret it” are others. All of these are psychological tools being used to push unsuspecting ticket buyers into making a rushed decision.

It works. ‘Viagogo still offering worthless tickets to unsuspecting customers,’ reads a Stuff headline from earlier this year. It’s a story about a Wellington woman who bought worthless tickets on Viagogo for an already sold out Russell Howard comedy show. It took her weeks to get her money back.

By now, it may sound like I’m beating a dead horse with a drumstick, but it’s worth saying again: don’t use Viagogo, even if you’re desperate. “We still urge ticket buyers to purchase from official ticket websites,” says Borrowdale. “Avoid clicking on the first internet search result you see for an event. Scroll down the page and find the official ticket outlet or, if you aren’t sure, visit the artist’s or organiser’s website to find out who is the official ticket seller.”

Or, even if you’re a jaded 43-year-old like me, sign up to receive an artist’s newsletters. Honestly, some of Lorde’s recent musings have been a bit crap. One talked about a poolside party platter that included a goat’s cheese called ‘Devotion’ and Castelvetrano olives. That’s not good content. But it’s worth it to get emails containing secret concert codes.

Because when you a buy a concert ticket, you want to be able to use it. You know the drill. Good luck out there.

Updated July 6, 2021, with the following statement from Viagogo:

“It is perfectly okay for someone to resell their ticket through viagogo if they wish to, and these statements from promoters are just a scare tactic by the event organizer to control the sale of tickets. We encourage event organizers to contact us directly using our event organizer portal, should they have any queries or concerns relating to their event. In this instance we have noted the correction regarding the VIP section and have adjusted the listing accordingly.

viagogo does not set ticket prices, these are set by the people who use the platform to resell their tickets. It is made clear that prices may be listed as higher or lower than the face value, depending on demand, so that all users are aware of this fact prior to their purchase. Tickets that are listed at unreasonable prices get the most media attention but rarely, if ever, sell.

The viagogo guarantee ensures our buyers receive valid tickets and in the extremely rare case of a problem (no more than 1% of tickets sold worldwide in 2019 had any issues), viagogo steps in to find comparable replacements – or offer a full refund. Irrespectively, there is no incentive for sellers to sell fraudulent tickets on our website because viagogo does not pay a seller until a buyer has successfully gained entry into the event.”