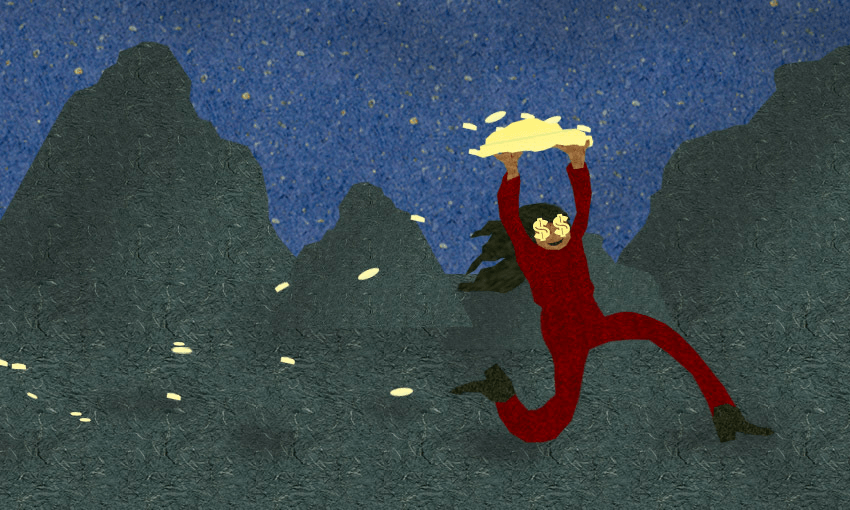 There’s still gold in them hills

Summer reissue: The price of gold hit record highs in August, and New Zealanders are lusting for it. Josie Adams investigates the age-old attraction of this precious metal – and where we’re getting it from.

Gold is real money. You can’t print it from a machine or birth it from a Bitcoin maths equation. You find it on an island marked with an X, or pry it from the mouths of corpses. It’s tangible. It’s the literal “gold standard”.

Yet some of us are under the impression that gold in New Zealand died out with the Otago gold rush. Not so.

Last year gold was linked to a methamphetamine syndicate in Wellington, and six West Coast gold mines were robbed in systematic raids.

Gold hits the news for its use in the criminal world more than its standard use: investment. Thousands of New Zealanders have invested in gold; real gold bars or coins, kept in storage facilities or in their own homes. Even jewellery is an investment, kept safe for pawning or passing on to heirs. More rugged investors have raw nuggets and flakes, stored in jars and shoved in the cupboard.

It’s considered a safe investment because the value of gold stays relatively steady. There’s a set amount of it available, despite alchemists’ attempts to create more, so it’s unlikely to drop much in price. That’s why crime lords can stash it in their walls for decades. This year it hit several record highs, peaking at $3,113.45 per troy ounce in August. It’s gone up in value by around 30%; a significant spike for a traditionally stable asset.

Simon Harding, chief executive at the New Zealand Mint, said business was booming. The NZ Mint is a bullion exchange, where people can buy and sell precious metals. Harding said more people were buying than selling this year. “Uncertainty drives people to buy tangible assets,” he said. “We’ve seen a lot of new customers, and we’ve probably seen people who haven’t in the past considered gold or silver as an investment.

“I think, in the past, many people thought pressed metal investments were a very difficult thing to do, or you had to be a multi-millionaire to do it, but that’s not the case,” he continued. A troy ounce of gold – almost three grams heavier than a regular ounce – is worth (at the time of writing) $2,913.

Harding thinks what used to be a disadvantage to buying gold – that it doesn’t grow in value by much – is no longer holding buyers back. “People have been perceiving that they’re missing out on interest, but right now there’s not a lot of interest to be had anywhere, and there’s been a huge capital appreciation in gold and silver this year.”

For those looking to invest in a cheaper treasure chest, silver is much less pricey at around $40 per ounce. It also has more industrial uses and is reflective, so come the apocalypse may actually be worth something in a trade.

The NZ Mint can store gold for its users, but Harding said most choose to store it at home. “Sometimes we get it back and it’s covered in dirt,” he added.

“We get the odd sad story, phone calls from widows or widowers whose partners have invested with us and bought precious metal, but they don’t know what they’ve done with it – whether they’ve buried it in the garden without leaving a plan behind or a map with an X.”

Jade Wright, a Nelson-based roading contractor and enthusiastic gold fossicker, hasn’t marked his treasure trove on a map. He’s sold most of the nuggets he’s found. “I usually don’t keep too much,” he said. “I keep nice bits of gold – pickers and nuggets and stuff that looks cool, or has a character or meaning to it.” (A picker is basically a small nugget, or large flake.)

The rest he gives away on his YouTube channel – where he vlogs his search for gold in the hills and rivers of the South Island – or sells on TradeMe. He reckons you can get a higher premium for it online. “Gold dealers will only give you between 80-90% of its worth,” he said. “On TradeMe or Facebook marketplace you can get just about 100% of what spot price is.”

Gold is in his blood. “I’m originally from the West Coast, so I still go down there quite a bit,” he said. “My granddad was a coal miner and a gold miner.”

Wright prefers the adventure of the hunt to collecting a pile of treasure. He just sold a gold claim at Canvastown, in Pelorus. “The public fossicking area is where we go now,” he said. “Not very far away we’ve got one up between the two Nelson lakes, up the Howard river, and then we’ve got the ones over Golden Bay.”

There are 19 public fossicking sites in the South Island, where anyone can come with a pan, sluice or metal detector to find some precious metal. You can apply for a permit to explore or mine gold outside these areas..

“I’d say this year it was starting to pick up, but the bloody lockdowns have put a hamper on things,” he said. “If things settle down this summer, it could be a pretty busy one.”

An Otago-based “hobbyist” miner who wished to remain anonymous told The Spinoff last year that he could readily find over a kilogram of gold – currently worth around $93,500 – around his home, despite donating some and trading more for old guns and other “collectibles”. He’s been fossicking for almost 60 years. “I have other gold and hid it, but now don’t know where I put it,” he said.

The price is high and the quantity is low, but Wright reckons gold isn’t going anywhere soon. It’s not too late to bury your own in the yard. “There’s always going to be quite a bit coming out of the rivers, and the ground,” he said.

“It will keep washing out of the veins. It might not be as much as what it used to be back in the day, but there’ll always be a wee bit floating around.”