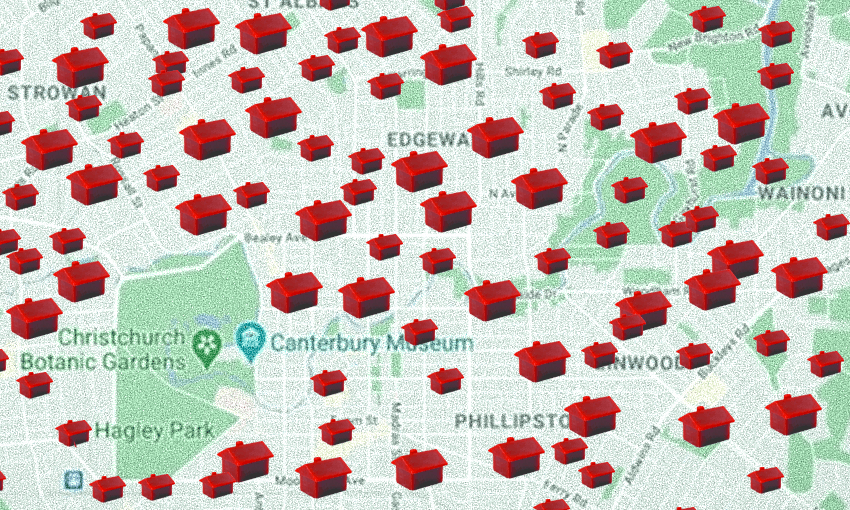 Oh no: one landlord is set to own all of Christchurch by the year 2053

On Wednesday, Stuff wrote a glowing tribute to aspiring property magnate Ana Meredith. We commissioned a special Spinoff data project to look into some of Meredith’s ambitions, and unearthed some disturbing implications.

Stuff’s profile of the Christchurch serial landlord Ana Meredith is pitched as an inspirational riches-to-riches tale. It starts in 2016, with Meredith nervously snaking her first surplus house out of the clutches of non-investors. Fast-forward to 2020, and Meredith has gained the inner strength she needs to ruthlessly marshal her asset dominance over the less well-off. As some people hoard toilet paper, she hoards shelter, grabbing five more houses while her competition is distracted trying not to catch coronavirus. Meredith, the story says, will not stop. She has 10 houses now. She wants 25 by 2025. She is a collapsing star, sucking property after property into the black void of her gravitational field, and spitting them out in return for positive cash yields.

This may seem good, but a Spinoff data analysis carried out over the last two days has uncovered some disturbing implications of Meredith’s story. Using maths, we’ve been able to map out the future facing Aotearoa if she keeps consuming housing at her current rate. All the statistics are pointing to one thing: bad stuff happening.

Tim Muller, an environmental scientist and “data nerd”, was the first to raise the alarm. He noted that at the time of the 2018 Census, there were 153,531 houses in Christchurch. His back-of-the-envelope modelling shows that if we use 2020 – when Meredith acquired five houses – as year zero, and assume her empire will increase fivefold every five years, in line with her current projections, she will own every property in Christchurch somewhere between 2050 and 2055.

Muller’s calculations raised concerns at The Spinoff’s headquarters. But Muller, while passionate, is still not a professional in the field of data. We put his figures to an internationally respected Auckland University statistician, Professor Thomas Lumley. He confirmed Muller is essentially correct – though he has refined the results to a much higher degree of specificity. Assuming a quintupling of Meredith’s housing stock every five years, she will gain complete command of our second-biggest city just before 2am on February 5, 2053, Lumley says.

However, Lumley does take issue with the premise of using 2020 as year zero of the Meredith era. He has created a separate model starting in the year 2016, when she bought her first property, and inserted the actual data on her property acquisitions. Lumley then uses “R” to fit a “Poisson regression model”, and concludes Meredith’s house stock will increase 30.26% per year. “We get to total Christchurch ownership late in 2058,” he says.

Despite Lumley’s formidable reputation, there’s still some hope these models won’t turn out to be 100% accurate. Even so, are Meredith’s actions really as praiseworthy as Stuff makes them out to be? Chlöe Swarbrick, the MP for Auckland Central, is sceptical about the benefits of buying a property empire, and driving up housing prices, during a chronic, catastrophic housing shortage. “I personally don’t think it’s a success if you’re pouring gasoline on the fire of the housing crisis,” she says.

Swarbrick may have a point. But it’s hard to blame Meredith for wanting to get into property investment. Stories like hers run every week in Stuff’s Homed section, or the Herald’s equally pro-housing crisis foldout, OneRoof. Sometimes it’s a property investor getting plaudits. Sometimes it’s a young person who’s used their moxie, self-discipline and life of wild privilege to finagle their way into a first home. The underlying message of these stories is always the same: you should be getting into property investment, and if you’re not, you’re kind of a failure.

These sections sustain New Zealand’s housing crisis, even as the ad dollars they generate pay the salaries of the reporters exposing its devastating effects. Meredith is a product not only of that dissonant system, but the political order underpinning it. Putting aside her offensive implication that we’d all be putting together massive property portfolios if we stopped binge-watching Bridgerton, she’s following the economic incentives laid out for her by successive governments. They’ve permitted regressive local councils to hold back development, and create the supply shortage needed for investors to thrive. They tax the first dollar you make as a trainee at The Warehouse, while walling off the $1.3 trillion property market as an almost entirely tax-free zone.

Given those conditions, Meredith’s story is understandable. It’s economically savvy. It’s ambitious. But it’s not admirable. It’s not inspirational. Stories like hers may read as useful instruction for the rich and well-connected, but for the people stuck living in mouldy rentals, or their cars, they’re a near-daily boot to the shins; a reminder of how badly our institutions have failed. At its heart, Meredith’s isn’t a story about one woman’s success. It’s a story of societal failure, and that’s true even if she doesn’t eventually end up owning the Garden City.