These days, a university degree tends to carry less prestige and market value than it did in the past. But as Emma Vitz writes, it’s generally faster to pay back your student loan today.

The moment you pay off your student loan, you’ve given yourself one of the biggest pay rises of your career. 12% is a good chunk of your income, enough to make a difference to your ability to save for retirement or a deposit. I wanted to know – how long does it take to get to this tantalising moment?

A student who graduated in 2020 after three years of studying and borrowing the average amount each year would have a loan of $41,457 according to MSD data. This number was $25,097 for someone who graduated in 2002 and has been steadily increasing since then. In New Zealand, student loan repayments currently kick in when you earn more than $380 a week, or $19,760 per year. The IRD clips the ticket on anything you earn above this threshold at a rate of 12% before tax. Luckily for students and anyone calculating a payback period, we don’t apply inflation to student loans in New Zealand and only charge interest if the borrower is living overseas.

Today I’d like to take a dive into differences in the student loan payback period by industry, while putting differences by gender and ethnicity aside for another article.

In order to calculate how long it would take to pay back the average student loan, we need to know how much money someone earns. When using aggregated income data, we need to take into account the (hopefully) higher income that someone with a degree earns. So how much more do you get paid if you have a degree, compared to those with a lower qualification? This number varies significantly by industry. On the high end, the transport, postal and warehousing industry pays 41% more on average to someone with a degree, compared to a lower qualification. On the other end of the spectrum, art, recreation and other services pays only 19% more. Across all industries, having a degree has a premium of about 36% from 2013 to 2020.

This number has decreased over time, indicating that a degree is likely to have less of an effect on your income now than it did in the past. Overall, the extra amount you’re likely to earn has fallen by about 5% from 2013 to 2020. Across 14 industries, only three saw an increase in the amount of extra income that having a degree gets you: rental, hiring and real estate services and construction. This proves once again that if you can’t buy a house, building and selling houses might be the best way to make money in New Zealand. Information, media and telecommunications also saw an increase in the extra amount paid to those with a degree. 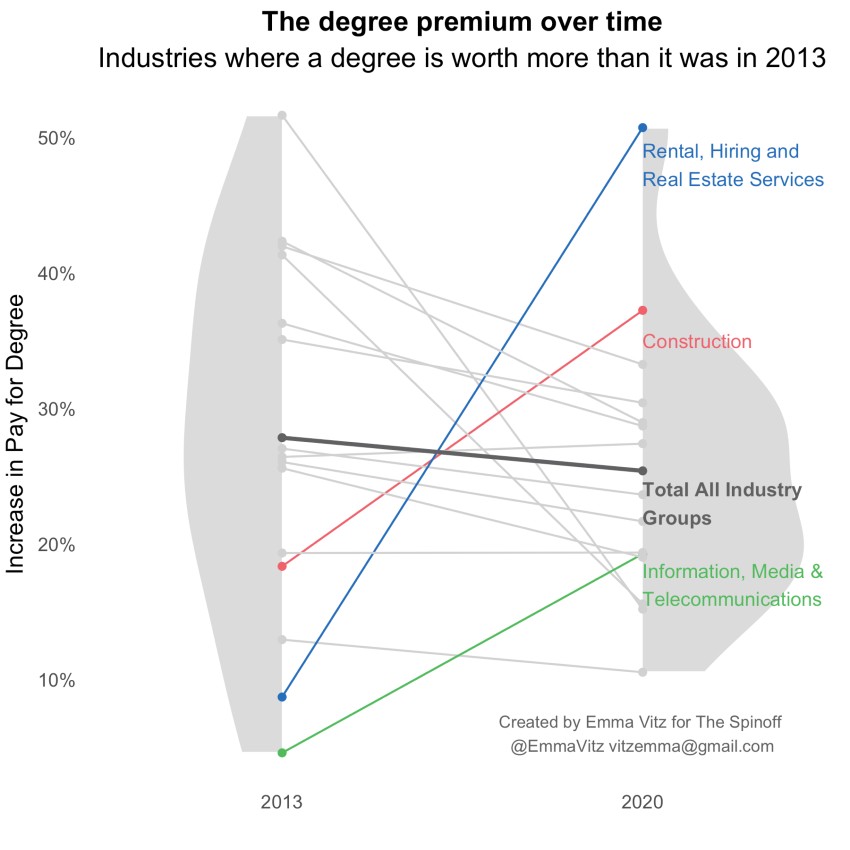 I took similar adjustments of the “degree premium” and applied them to the income data. In all cases, I assumed the student turned 22 the year they graduated, and accounted for age increases (and subsequent income increases) as they paid off their loan.

In order to get an idea of how long it will take more recent graduates to pay off their loan, I also needed to project incomes into the future. This was based on average wage inflation from 2009 to 2020 by gender, ethnicity and industry. From here, we can work out when a student will have paid off their student loan.

The graphs below show the payback period that a student graduating in a certain year and working in a certain industry would likely have. Across all industries, the average graduate leaving university in 2009 would have taken 7.9 years to pay back their loan. Those graduating in 2020 can expect to be done after an average of seven years. 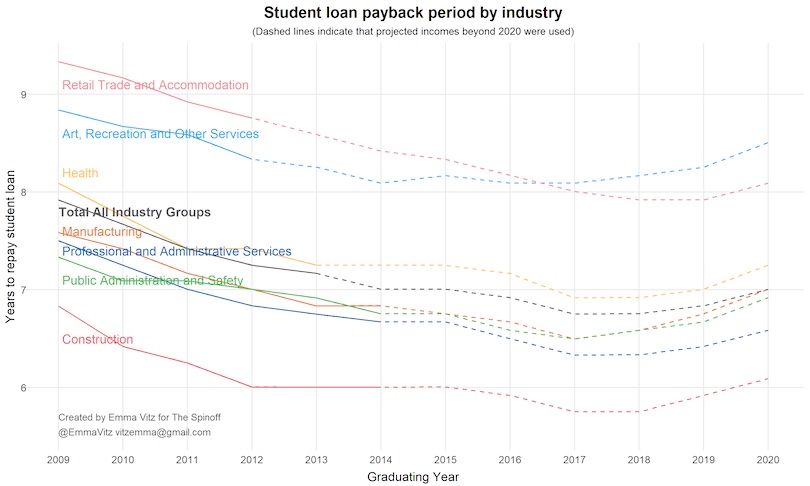 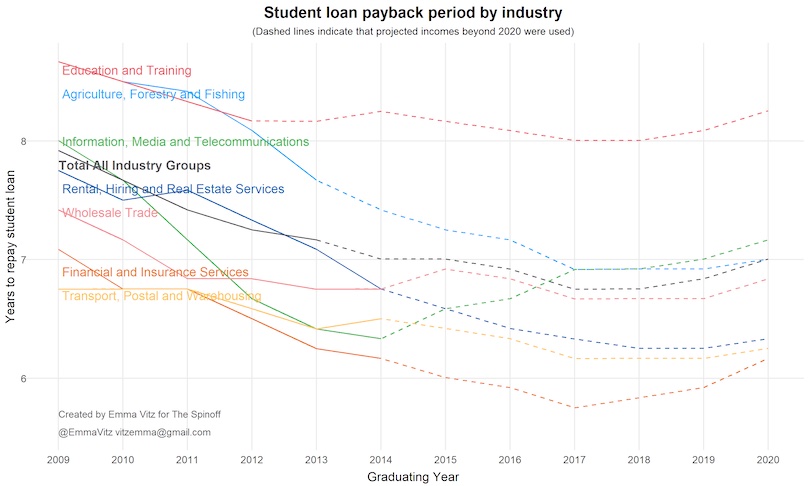 For students graduating in 2009, the slowest industry to repay the average loan was retail trade and accommodation at 9.3 years. The fastest industries were transport, postal, warehousing and construction at 6.8 years each.

Of those graduating in 2020, people working in Art, Recreation and Other Services are likely to take the longest to pay off their loans at 8.5 years. Construction holds the top spot for fastest payback period of 6.1 years.

Overall, graduates in all industries can expect to pay off their loan more quickly than in the past. Why is this?

One reason is that the income cap at which the IRD starts deducting student loan repayments only started to change in response to wage inflation in 2017. Before that, the cutoff was $367 per week or $19,084 per year.

The other change is that before April 1, 2013, the IRD deducted 10% of your income instead of the 12% we currently pay. This means you’re effectively allowed to keep less of your money before student loan payments get taken out.

Whether you see that as a good way to get debt free more quickly or another hit to your paycheque probably depends on the personal situation you find yourself in. In any case, while your degree is probably worth less than it would have been in the past, you’ll be free of that student loan faster as well.