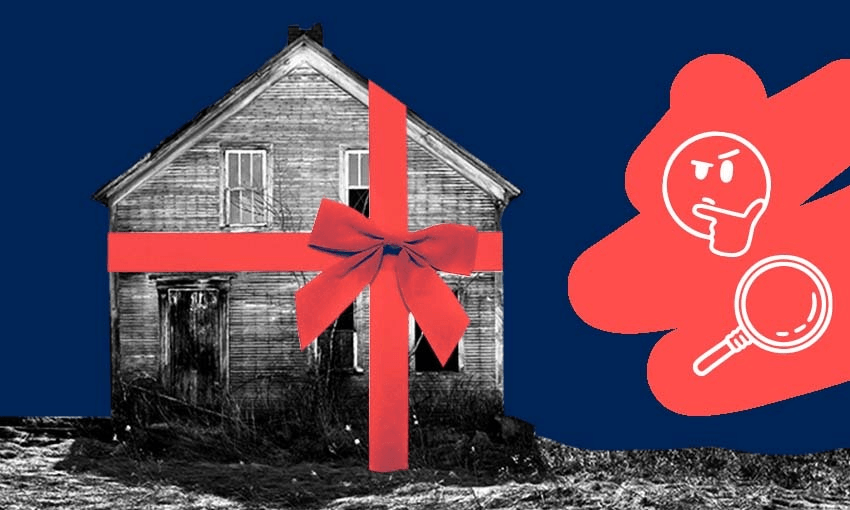 All I want for Christmas is a landlord register

While tenants must jump through hoops to prove they’re worth renting to, it’s near impossible to know whether a prospective landlord is actually a slumlord, or worse. This festive season, Ollie Neas is wishing for the gift of change.

It was a classic Kiwi Christmas.

Pōhutukawa flowers littered the pavement like confetti. Sausages sizzled on barbecues as sunscreen was slipped and slopped. Carols filled the air. Property investors across the land were resting up after a hard year of owning things.

The year was 2020 and I was feeling blessed. Records were being smashed everywhere – house prices, rents, public housing waitlists – but I had a flat and the bedroom wall didn’t leak when it rained. Luxury. I gave thanks to the gods, especially my landlord Dave*. The moment I shook Dave’s soft hand I knew I was dealing with the best.

But something was eating away at me. It had been six months since I’d moved in and six months since my flatmate and I had transferred Dave our bond. But no bond had been lodged with Tenancy Services. Our money – thousands of dollars of it – sat in Dave’s bank account unlawfully, being used for who knows what. Email after email about the issue went unanswered. Clouds were gathering in the classic Kiwi summer sky.

Cautiously, we entered our landlord’s name in the Tenancy Tribunal database. My heart sank. It seemed Dave was no stranger to the tribunal – on multiple occasions he had failed to lodge tenants’ bonds. One tribunal decision noted a pattern of behaviour. We emailed Dave again, this time deploying the magic words: “Tenancy Tribunal”. Suddenly he was responsive, offering up apologies and explanations like unannounced flat inspections.

My landlord knew almost everything about me – my age, what I did for work, my residency status, whether I smoked, my credit history and criminal record. But I knew almost nothing about him beyond his first and last name. As my date with the tribunal approached, I wanted to know: who really was I renting from?

The Tenancy Tribunal decisions I’d found suggested Dave had a habit of holding property through companies and trusts. A search of the companies register confirmed this: Dave owned or was director of a long list of companies, many of which appeared to be vehicles for owning property. Technically, my landlord was one of these companies, not Dave.

But this was where my search ended. How many properties did Dave own through each company? How many property-owning trusts was Dave tied to? Just how much of the city rented from this guy? How much bond money had he swindled? There was no way to know.

The problem is this: there’s no central database of who owns New Zealand’s property. There’s no way to be sure just how many properties a landlord owns and no way to assess their track record as a landlord.

It’s easy enough to find out who owns a particular property – just drop $5 on a LINZ land record search. But you can’t enter a person’s name and see how many properties they own. The only way around this is to extract the entire LINZ database of 1.7 million property titles and match those up with records of the nearly 700,000 registered companies. That’s technically possible if you have the time, money and technical expertise, which most people, including myself, don’t.

And even if you did all that, you still wouldn’t get a complete picture. Ten percent of New Zealand properties are owned by large companies whose shareholders aren’t listed in the Companies Office data. There’s also no register of trusts, so there’s no way for the public to know who’s in charge of a trust, who its beneficiaries are, or how much it earns. All we know is that the number of homes held by trusts is growing. Stuff reports that the number of trust-owned homes has jumped by 48% since 2015.

It’s also a struggle to know whether your landlord is a crook. A search of the Tenancy Tribunal database will tell you if your landlord has been before the tribunal recently. But tribunal decisions only stay online for three years, and there’s no way to know how many complaints against a landlord have been settled privately. A settlement doesn’t rule out that the landlord acted illegally – it often just means they’ve paid out the tenant to avoid a formal finding against them.

That’s what ended up happening with me and Dave. The night before our tribunal hearing, Dave offered to settle for $1,500 – which is $500 more than the tribunal could possibly award us in damages. My flatmate and I accepted the offer reluctantly. The tribunal would not be impressed if we refused the offer, but doing so meant future tenants would be none the wiser about Dave’s conduct. How many other times had Dave been here, taking a chance on tenants’ bonds, knowing that most tenants wouldn’t notice, and that those who did could always be paid out?

It’s extraordinary that it’s this hard.

Half of all adults now live in rented homes. The home ownership rate is at a 70-year low. But while more and more of us have landlords in our lives, we matter to our landlords less and less. This is because most landlords are not really landlords any more – they’re speculators. A recent study found most Auckland rental purchases don’t stack up in any conventional investment sense. Buyers are instead speculating in the expectation of tax-free capital gains. The rents they take in are often an afterthought – albeit one that is sucking up more and more of our incomes. The imbalance is huge.

That’s why I want a landlord register this Christmas. Just as landlords can know if a prospective tenant is employed and credit-worthy, every renter should be able to know if they’re dealing with a slumlord. This means a public register of property ownership that sees through company structures and trusts. And it means tying in Tenancy Tribunal data so renters can see how many claims have been lodged against a landlord, and how many of those claims have been upheld.

No doubt this will be opposed by the property investor lobby. They’ll say it’s a breach of privacy and that it demonises landlords when they should actually be celebrated for their business savvy. But the real reason they’ll oppose it is this: it focuses our attention in an uncomfortable direction.

For years, the housing debate has been dominated by the idea that all we need to worry about is how many houses there are, not who owns them. If we just build more houses then maybe we can all be like Christopher Luxon one day and own seven. But making it easy to see who actually owns property in this country will remind us how hollow this promise really is.

Because it’s not just that fewer of us own houses than before. It’s that those who do are increasingly investors, not owner-occupiers. Investors’ share of the housing stock has increased 191% since the late 80s, compared to a 37% increase for owner-occupiers. Investors are largely buying up existing homes, not building new ones. When they do build homes, they are mostly for the upper end of the market.

And the investment stock appears to be falling into fewer hands. A recent Stuff investigation suggests 20% of investment properties are owned by people with six or more properties, while 22,100 homes are owned by landlords with more than 20 properties each. The proportion of homes owned by these big fish is growing. Given the lack of transparency around trusts, and of any official reporting on residential property ownership concentration, the true picture may be even worse.

These facts upend the usual myths about home ownership in New Zealand and suggest new possibilities for how to respond to the housing crisis. It reminds us that every investment property is a home that could be owned by a renter. That every profit-making rental could be removed from the market and provided to those in need. That the tornado of speculation that has transformed housing into a commodity is neither inevitable or necessary.

These are dangerous thoughts which threaten to conjure up ghosts of Christmases past.

Once upon a time a landed gentry dominated the South Island. Just 1% of landowners owned 78% of the farmland. But then the government stepped in. Over a decade from 1892, it expropriated – sometimes forcefully – 176 South Island properties, dividing them into 3,500 farms that were then allocated to small farmers by ballot. Conservatives called it the work of “socialist devils”, but it worked. By 1915, one in ten farmers worked land that had been subdivided from a great estate.

A century on, property once again divides the country. The wealth of those who own property grew by $400 billion in the decade to 2019. Meanwhile, the poorest half of New Zealanders – the half without property – own just 1.7% of household wealth.

Let’s start with a landlord register. Expropriation can wait until the next holiday season.