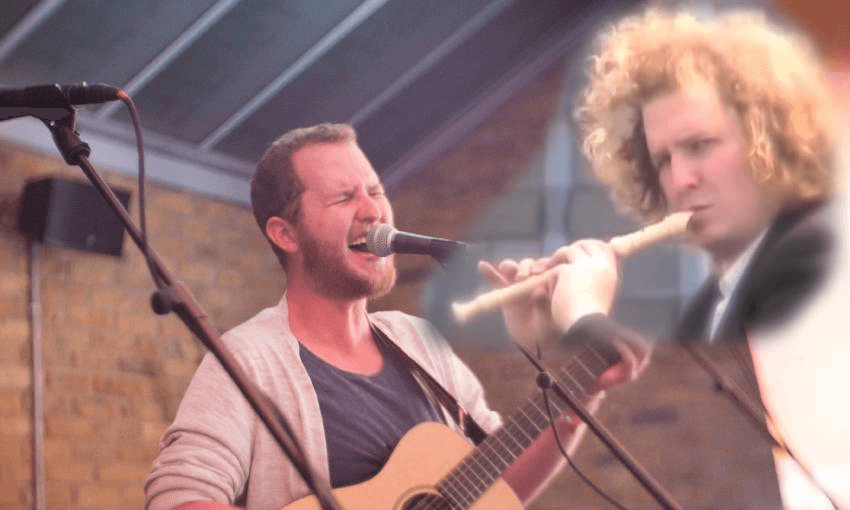 From recorders to records: Matt Mulholland is a serious musician

The Wellington-based musician’s new album is the culmination of 10 years of memories, YouTube, and jazz school.

It’s been over a decade since ‘My Heart Will Go On – Recorder by Candlelight’ was uploaded to YouTube. It is a work of exceptional craftsmanship. The soft focus, the notes pitching in just the wrong places, and the pensive to-camera glances are all perfectly calculated to earn its almost 32 million views. It’s a serious song played by an excellent musician on the world’s shittest instrument: the recorder.

The artist behind it, Matt Mulholland, has just released a serious album. He is a trained, talented musician and vocalist, with over a decade of band work and songwriting under his belt. Even so, he’s happy to be asked about “the recorder thing”.

Thankfully, he has an innate ability to find beauty in otherwise chaotic sounds. He studied jazz at university. He’s done musical theatre. He used to be a comedian. These could be the traits of the world’s most annoying artist, but Mulholland isn’t eccentric; he’s just got a lot of talents.

“I’ve always wanted to make things that feel right in the time,” he says of his hectic artistic history. “If you get inspiration, then do it, and do it to the best of your ability.” His recorder arrangements are exquisitely done, his ‘Uptown Funk’ live loops cover brings out details in the song I’d never noticed before, and his new album deftly captures the essence of every genre Mulholland has ever worked with.

“We’ve got a bit of soul, a bit of folk, a bit of country, a little gospel,” he says. “Each track has its own vibe.” Overall, he’d call it pop music, because it’s accessible. It also has a unifying theme: love. When I point this out, he says it’s something he’s just noticed, too. “It’s really a selection of big moments throughout my life over the last 10 years, but I guess a lot of what has the biggest impact is romance.”

Why did it take 10 years to put out an album? “I’ve been doing music my whole life, and YouTube, and I’ve done albums before but they’ve always kind of been homemade jobs. I got to a point where I wanted to see what I could do if I went full-on.” There was no rush for him. This album is about artistic achievement, not hitting a production quota.

He’s excited, and a little nervous about putting it out there in the world. “It’s been a long time coming,” he says. “A massive amount of effort and time has gone into it.” He wanted to be more traditional about the album release, but then Covid-19 hit. “I’ve figured it’s more useful to have new music out now because everyone’s stuck at home.”

Yesterday he hosted a live stream on YouTube – where he has more than 200,000 subscribers – to play songs from the new album. “It’s like sex for ears,” said one commenter, watching Mulholland casually strum a guitar. He’s got fans. “This one goes out to anyone who’s done some travelling before,” he said before launching into the country-esque ‘London’.

“For many years I identified as a comedian,” he tells me. “I thought it would be really funny to be a really good musician and ruin it by doing comedy elements.” Things changed, and he’s less self-ruining now, but his album still has a sense of humour.

“We often try to be one thing, and that’s quite limiting, not just creatively but also as humans,” he says. Within us all lives multitudes, and within Matt Mulholland lives a jazz musician, a comedian, and a recorder-based cover artist. None of them are dead yet.

He says there’s only so much of playing the recorder or the trumpet you can do before it stops being fun, but we haven’t hit that point yet. “I have one more [recorder video] that I want to do at some point in my life, and it’s awesome. I might do it in 20 years’ time when everyone’s forgotten about it.”

After You Grow is out now on Spotify.