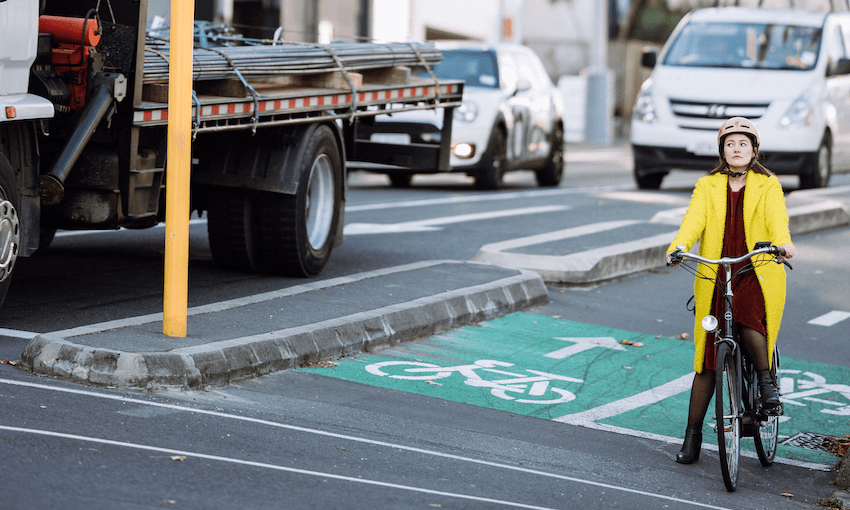 Cycling: the costs, the benefits, and the culture clash

By NZIER
Public Good Team
Made possible by

Cycling is an unusually controversial topic. The NZIER public good team explains why the government invests in cycle lanes, and why they make some people so mad.

Under lockdown, we saw nature healing. The air was fresh and clean, native birdsong filled our ears, and bikes returned to the roads. It’s not surprising that bike owners dusted off their wheels and tentatively re-claimed the road – cycling allowed physical distancing and exercise, and there were very few cars to pose a threat.

“In the two days leading up to alert level four, we ran out of electric bikes for people to rent for the lockdown period,” says Ryan O’Connell, owner of Wellington e-bike rental shop Switched On Bikes. “Now they’ve had a taste of the ease and convenience that biking offers, many have taken up longer-term electric bike subscriptions.” Unfortunately, our level one freedoms have led to roads once again being filled with cars and they no longer have the appealing empty feel. If only there was some way for people on bikes to travel around safely.

If only there were more cycle lanes.

If you just had a visceral response to the words “cycle lanes”, you’re not alone – here in New Zealand, we care a lot about them. Love them or hate them, you probably have an opinion. In Wellington, hotly anticipated funds for temporary cycle lanes were pulled last minute following threatened legal action around a “misleading” consultation process. And the Island Bay cycle lane? Best to not get into that fiasco.

The point is, the way our roads and pavements are set up can have a major effect on our lives, affecting our regular journeys, the vehicles we choose, and the amount of risk we undertake. But with all these strong feelings around an expensive piece of transport infrastructure, it becomes very difficult to know who to listen to. So what tools do we have to help make an objective decision?

Fortunately, when it comes to the major cross-region decisions, the well-established decision-making process around transport involves a really big calculation (local councils tend to have their own processes for local decisions). Essentially, the New Zealand Transport Agency (NZTA) attempts to add up all the costs and all the benefits of the project and makes sure the benefits are not only bigger than the costs, but are also bigger than the benefits of other options.

Technically, it’s called a social cost-benefit analysis, because it’s meant to capture not just the financial cost, but the social cost too – all measured in money. Obviously, putting a price tag on social value gets a little complicated, but fortunately, the NZTA has a 536-page Economic Evaluation Manual (EEM) which outlines exactly which costs and which benefits need to be included and how you count them. Don’t worry, we read it so you don’t have to.

What are the costs?

The cost side is pretty straightforward, because many of the costs are already measured in money. There’s the cost of the materials, the labour, the land, the maintenance, and of actually designing the thing. Costs are called “whole-of-life” costs which means you consider the costs for the whole expected lifespan of the project.

What are the benefits?

This is where things get interesting. The EEM’s got a massive list of benefits to include, depending on the nature of the project. Firstly, the obvious: vehicle operating cost savings, crash cost savings, and parking user cost savings. These are nice and tangible – they’re simply savings we can add up.

Then there are some that are a bit harder to measure: travel time cost savings, risk reduction benefits, vehicle emission reduction benefits, and walking and cycling health benefits. Health factors tend to dominate the benefits side for cycle lanes because cycling is really good for you. The NZTA allows for an overall benefit of $1.45 per cyclist per kilometre which is made up of $1.30 for health benefits, five cents for safety, and 10 cents for reducing road traffic. So if you start cycling six kilometres five days a week, that’s $39 worth of health benefits a week – nice!

What about someone who inexplicably just hates cycle lanes. Do you account for their wellbeing?

Sorry, the NZTA decided not to include that. Maybe they’re cancelled out by all the people who love to see a cycle lane.

Remember that people on bikes reduce the number of cars on the roads, so really they’re doing everyone a favour. But it isn’t missed because they don’t know how to measure it – “driver frustration reduction benefits” are actually counted when passing lanes are being weighed up, a road feature which undeniably makes driving more pleasant. In fact, they do actually manage to put a dollar amount on it.

You can have a go: take a moment to think about how much you’d be prepared to pay for a passing lane for the whole way of a regular journey you make. Go on, have a think. A dollar? Ten if you’re late? If you’re a bit freaked by that question, don’t worry – the survey which asked unsuspecting drivers in petrol stations came back with a lot of zero dollars because it’s really difficult to answer.

The researchers later went back and instead asked what time or distance they would be prepared to travel in order to have a passing lane for the whole journey – something that’s a bit easier to think about – and then put a monetary value on the extra time or distance. On that basis, the NZTA reckons it’s worth 3.5 cents per vehicle per kilometre of constructed passing lane.

What about time frame?

Now we know which costs and benefits to include, we need to think about when they happen. In general, people prefer benefits which happen now over benefits which happen later – you’d probably rather eat the cake now than wait until tomorrow. And these costs and benefits are all being accrued at different times. Essentially, you pick a discount rate – that is, the rate you’re willing to trade-off present benefits and costs against future ones. The NZTA uses 6% so they’re saying benefits that happen in one year’s time are worth 6% less than benefits that happen today.

The right discount rate is a pretty controversial topic among economists because there really isn’t an objective way to choose one – it takes value judgements to decide how much to value the future. The discount rate affects the whole calculation, so it’s worth checking the numbers with a range – the NZTA recommend also testing 4% and 8% to make sure the results are nice and robust.

So I’ve got my costs, benefits, and time discounting – now what?

The moment of truth: it’s time to do the sums. People tend to report the outcome of a cost-benefit analysis with a “benefit-cost ratio” (BCR) which is the total present value of benefits, divided by the total present value of costs. So if the BCR is bigger than one, the benefits outweigh the costs. If you’re comparing a load of different options, this ratio is helpful for getting the most cost-effective choice.

And you’re telling me this is objective?

As you can see, a cost-benefit analysis done well really does try to include all the costs and benefits as thoroughly as possible. The problem is, with so many separate parts to calculate, it’s possible that some of the valuations miss the mark. For example, the benefits of cycle lanes are measured per bike, but the number of bikes that use the lane once it’s introduced could be very different to the estimated amount.

There’s also the fact that cost-benefit analysis doesn’t consider who the costs and the benefits fall on. But for all its misgivings, decision makers faced with choices around which investments to fund using a limited pot of money need some sort of calculation to help make an informed choice, and the more comprehensive, the better  as long as the cost-benefit analysis doesn’t become the only source of information.

Essentially, we all carry out a mini cost-benefit analysis in our heads every time we leave the house and decide what transport to use. We’ll account for time, weather, convenience, or just trust the decision we made last time.

You might make a very different decision to someone else, even if they’re making the same journey, because you value the costs and benefits differently. This goes to show that there’s certainly subjectivity at play, so it’s best not to leave these big, important decisions to the whims of a mathematical formula. That’s when we want a decision maker who can consider not just the costs and benefits, but the context of the decision and how people feel about it.

That’s the role of the transport minister – to take a cost-benefit analysis alongside the consultations and petitions, make a decision, and be held to account.

This content was created in paid partnership with NZIER. Learn more about our partnerships here.

NZIER
Made possible by

How do we pay for the Covid-19 stimulus package?

Phrases like 'quantitative easing' and 'official cash rate' are becoming part of our everyday language. But what do they mean, and how do they explain the stimulus package?
By NZIER
Public Good Team