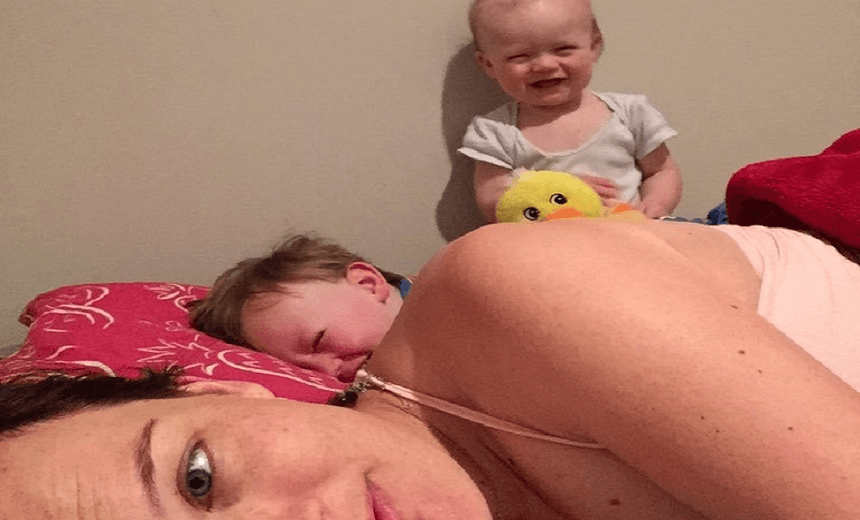 Spinoff Parents editor Emily Writes writes about co-sleeping and her long journey to self-acceptance about her style of parenting.

The other day I said to my husband “I should really try to get the baby to sleep on his own tonight.” My husband smiled and gave me a hug. He knew that what I really meant was “Tell me it’s OK our baby is still in bed with us at night.”

There are lots of reasons why we co-sleep most nights. I went through a stage where I hid the fact that we were co-sleeping. I thought the measure of a mum who had her shit together was how well her children slept. I have never been a particularly confident mother, but as my children have grown I’ve started to see how our choices have worked really well for us as a family. This has helped me be a bit kinder to myself, to have more faith in my abilities.

Co-sleeping feels like one of those half choice half obligation things for us. If our child didn’t want to co-sleep, we wouldn’t co-sleep. So it’s not entirely a choice, but it is a choice in that we are now comfortable with it as the thing we do.

Recently, my husband said to a sort-of-friend: “Oh yeah, both of our kids are in our beds – usually I have one and Emily has the other”. I was shocked. “Don’t tell people!” I hissed. He was perplexed. “It’s nothing to be ashamed of. What’s the big deal?”

Yet the next day, as I was waiting for my coffee, I heard a woman in the coffee shop lecturing her poor (maybe?) daughter-in-law on “tough love” and how her child will never sleep on their own.

I was again, immediately defensive. I wanted to turn to her and say:

Yes, we have tried putting them in their own room and saying “stay in there”. Are we soft? Sure. But what’s the downside to being soft? Surely in this world we live in we need more gentle parenting that is focused on the needs of the whole family? Being hard isn’t what we are about. We don’t want to be tough and we just don’t believe that the downfall of humanity is due to our parenting decisions. Letting a child who had a nightmare (or wet the bed or just feels sick or can’t sleep) into your bed is a little act of kindness that we, their parents – those who know them best – are happy to do. It’s not for everyone, and it doesn’t always work for us. But of the list of choices of what to do we are most happy with the cuddles for everything approach.

We’re not lazy but in all honesty – who cares if we are? Why is The Path Of Least Resistance Parenting so frowned upon? Parenting isn’t meant to be an ordeal. Why not make it easier?

No, you don’t have to co-sleep. Honestly, it’s not possible to put into words how little I care about how other parents parent at night. Lack of sleep is a killer. You need to do what’s right for you. So you don’t want kids in your bed? Fine with me. It’s not my bed. I’d ask for the same courtesy though.

Yes, I have a happy marriage and yes, my husband is OK with our child sleeping with us. He’s also happy to sleep in the bunk sometimes, or the spare room, just like I do. And you know what BERYL we actually have a really happy marriage because I get to watch him willingly choose to do what works for our family as a whole on a nightly (and daily) basis. It teaches me to compromise too. We make decisions together because we are both parents and we respect each other.

And yes, we have sex. I was once asked this when I was visibly very pregnant. It was not an immaculate conception. This might sound shocking, but there are other places to have sex that aren’t a bed. I’m sorry you’re so limited in imagination. But also, is it weird that you want to know? I guess I’d be fixated if the only time I did the deed was with the lights out in the marital bed.

And no our children aren’t spoilt or out of control – we are a family that considers each other and tries to do what’s best. For us. Only. Not you, not your family, just us. And for us, this works with our way of being a family and it works for the kids and it might be a hassle some nights but ultimately this is a it’ll be fine in the end/you’re only little once kind of approach.

No they won’t be sleeping with us when they’re 18 but I’ve never understood how the same people who say that also say that their children don’t speak to them anymore and cherish every second of every minute of every hour of the day because soon you’ll be alone, so alone. So alone that you fashion a dog out of pantyhose and newspaper and drag it around your living room saying “Come pepper! Mama is here!”

Yes, you’re right – co-sleeping can really suck sometimes. Some days I do want to bitch about having a kid in my bed. But that doesn’t mean I’m miserable about it or that things will be different tonight or that I’m doing the wrong thing. It just means I had a bad night. And being able to complain about it isn’t an invitation for unsolicited advice. It’s not a time to say: “I’ve never had the kids in my bed and I never would I don’t know how you do it just put them in their own bed don’t you think it’s time for them to sleep on their own.” If you do that, people (me) will think you suck.

Do I think it’s time for a child to sleep on their own? Which child? What age? Here are some of the reasons why my children have returned to my bed for short periods:

So ultimately I’m OK with saying – come on in.

I sleep better with my husband in bed, and sometimes I even sleep better with one of the kids in bed. I have times when I wake up and reach over for comfort. It makes sense that my kids look for the same. And while they’re little, I’m happy to be able to answer that call.

Is this what it feels like to be comfortable in your parenting? Is this growing up?

Maybe it’s just time; it just feels normal for us now. It feels like way less of a big deal than it did two years ago.

Things might change tomorrow, next month, next year. But for now I’m happy accepting that I’m one of those people who likes to be close to the ones they love at night. And my kids are the same.

During the night, when my baby reaches for me, I think, this is just where I want you to be. And if that’s weird well, I’m weird. Because baby, you’re perfect. And one more snuggle is just what we all need.

More from The Spinoff Parents on babies and sleeping

Dr Jess Berentson-Shaw: The science and art of baby sleep in the first six months

Emily Writes’ top tips for getting your baby to sleep

Emily Writes: Is the advice on co-sleeping actually realistic?

Emily Writes: How to survive severe sleep deprivation – by someone who is living it

Angela Cuming: What being a Twin Mum has taught me about child sleep

Emily Writes: When you’re tired enough – on the hell of having a child who just won’t sleep