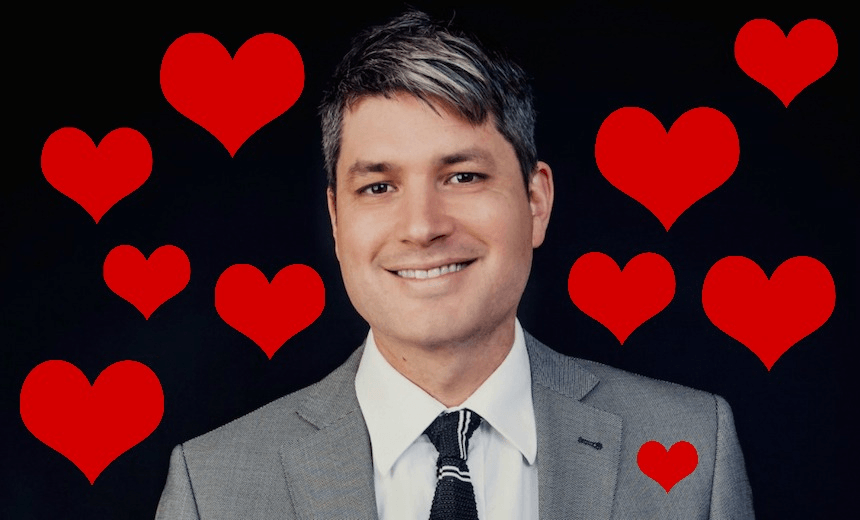 A tribute to Jesse Mulligan, the stay-at-home mum’s afternoon delight

There was a time when Friday afternoons were glorious. When at 4.30pm, a beer would arrive on my desk care of a keen colleague who’d mentally checked out of work five hours earlier. It was time to back away from the keyboard and officially welcome back my favourite friend: the weekend.

“Let’s go out for tequila!” someone would say.

Those days are gone. Friday afternoons have become a time to be feared. There is only one saviour in the darkness, a soothing voice ahead of the storm: Jesse Mulligan on RNZ.

Jesse’s show is a balm on the afternoon. One o’clock in our house is calm and quiet – number two is asleep, number one is in her bedroom. For 26 minutes and 32 seconds, until the end of number one’s episode of Playschool Australia (hosted by Jay Laga’aia and Kevin Rudd), there is just me, my lunch and Jesse.

Definition of ‘sweet relief’
swiːt rɪˈliːf/
1.
Consuming a cup of tea and a stale peanut butter sandwich while listening to Jesse Mulligan on RNZ National.
“she breathed a sigh of sweet relief when Jesse announced today’s special on ethical protein”

Jesse is the collective work husband of all stay-at-home mums. He’s funny. He’s relatable. He listens. He offers intelligent conversation without expecting anything in return. He’s also sleep deprived.

Jesse talks really fondly about his wife and their three kids. One time, he lost his engagement ring in the sea and for a minute he was single. But then some man-dolphin dived into the waves and found Jesse’s wedding ring in the sand and Jesse’s marriage was restored.

In writing this ode to Jesse, I realised he is in fact in an open relationship with pretty much everyone.

“I’m writing a piece about how much I love Jesse Mulligan,” I told a friend.

My love of Jesse is platonic. He’s my ultimate cruise ship companion, kind of like if Jack and Rose met on the Interislander rather than the Titanic.

But I believe the best way to truly show my appreciation for Jesse Mulligan is to rewrite the lyrics of Joshua Kadison’s 1993 classic, ‘Jessie’, in his honour. (Incidentally, the original song is about a girl who’s trying to organise a reunion with her cat. In the music video, Joshua Kadison, wearing a waistcoat with nothing underneath, plays a hand-painted piano in some sand dunes. I give it 10 out of 10.)

From a studio in Auckland, Jesse checks in at 1pm
His voice is like ice-cream straight out of Mr Whippee’s van
He says ‘today we’re listening to poetry
With some live music for the fans.
I’m putting on Jane’s Addiction
Just because I can.
We’ll laugh with the bug lady
About sexy centipedes.’
Jesse you always know how
To get me back up on my feet.

Jesse, paint a picture about how this arvo’s gonna be
By now I should know better to think it will be a breeze
By that stage you will have biked off
To your other job on TV
And we’ll be stuck with Jim Mora
And you will have been a dream.
Jesse you can always sell
Any dream to me.

But rainbows never last, and alas, neither does Jesse’s show. At 3.45pm, the dreaded Jim Mora ‘n’ the Panel take over and I find myself whimpering in a corner.

“Winter is coming,” I whisper.

Sure enough 4pm rolls around and things in my household turn sour.

“It’s NOT time for dinner. Joma and Juby are here for a play date and that would be RUDE.”

(The last one is particularly challenging. Have you ever tried negotiating with imaginary friends at 5pm? It’s IMPOSSIBLE.)

By 6.50pm, both kids have been bathed. The shampoo is mostly rinsed out of their hair. They’re in pyjamas that are a bit stiff, thanks to the dried porridge still stuck to the front. Their dinners are on the floor/walls/in my hair and to some extent, their tummies. Their books are ready, milk’s done and the finish line is so, so close.

I’ve never done a marathon, but 4pm to 7pm every day has to be like those last 10 kilometres when you’re so sure it has to be over soon.

And it’s some comfort to know that somewhere in Auckland, Jesse Mulligan’s wife is doing exactly the same thing.