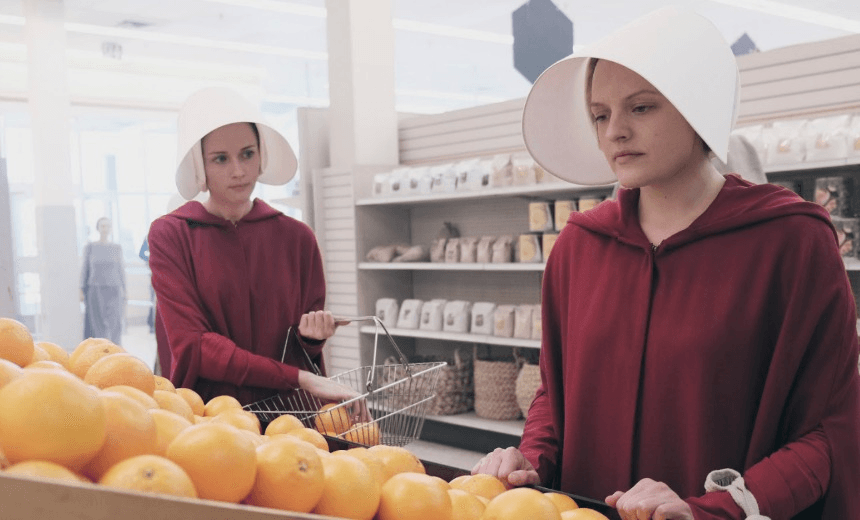 Surrogacy in the age of The Handmaid’s Tale

The Handmaid’s Tale portrays surrogacy as an act of violent exploitation. Surrogacy researcher Hannah Gibson considers how the show affects our understanding of surrogacy in New Zealand and asks: are women here being exploited?

Recently, I sat down with popcorn to watch the second season of The Handmaid’s Tale on Lightbox. Based on the 1985 book by Margaret Atwood, the show is a dystopian nightmare set in Gilead, a totalitarian regime located where the United States used to be. There, fertile women are captured and used as surrogates to reproduce children to combat a falling birth rate.

The wives of the men who run Gilead are infertile and are expected to welcome, or at least tolerate, the presence of the handmaid in their house. Together, wife and handmaid must participate in monthly ‘ceremonies’ where the latter lies between the wife’s open legs and is penetrated by the husband. Surrogacy, in this land, is akin to sexual servitude and women are valued only for their reproductive abilities. Their bodies are simply vessels to be used.

As a surrogacy researcher, I have been immersed in the New Zealand surrogacy community for the past two years. I’ve been spending my time talking with everyone involved in this form of assisted reproduction, including infertility doctors, embryologists, lawyers, counsellors, surrogates and intended parents.

The Handmaid’s Tale came onto my radar more out of curiosity than professional interest, but since then I’ve become increasingly interested in how it might shape people’s understandings of surrogacy. That’s especially the case for people who don’t have direct or indirect experience of surrogacy themselves (and no, reading about celebrities who have had children with surrogates doesn’t count).

So how close is this portrayal of surrogacy to reality?

According to one of my study participants who is a surrogate herself, “The Handmaid’s Tale is scary, but it’s nothing to do with [my] reality.” Her experience, and that of countless other surrogates, bears little resemblance to the practice depicted on the show, which not only involves sex but is also non-consensual.

On the other hand, I’ve been told countless times by members of the public that “women shouldn’t be used for their reproductive abilities”. They say surrogacy is exploitative and demeaning. But is that really what is happening?

Fundamental to any decision a woman makes to be a surrogate is the one thing that is missing from the lives of the handmaids: freedom. In fact, what the show has taught me about surrogacy is not that it is bad or should never be allowed. Rather it spotlighted the importance of free choice and consent.

Surrogates here value and fiercely defend the right for bodily autonomy (and do not belong to a totalitarian regime where they are captured and forced to procreate). For them, donating their time and womb to gestate a fetus reflects agency because they consent to do it. Women are free to be surrogates. Or to not be. Furthermore, the majority of surrogates actively seek out the opportunity to help those who are for a variety of reasons unable to gestate a baby.

Only altruistic surrogacy is legal here. Without getting into the fraught discussion of whether surrogates should be compensated for their time and effort, there are specific things that I believe define local surrogates. In the two years I’ve spent interviewing surrogates, none of them have talked of feeling coerced into helping others create a family.

This is not to say there isn’t contention over surrogacy as an assisted reproductive practice. Further afield, there is ample discussion on whether surrogates can be exploited or mistreated, such as when India allowed commercial surrogacy. Many write of the complexity involved in transnational surrogacy, particularly when first world citizens go to third world countries to pay a relatively small sum for a woman to carry their child. At the same time, we cannot say that in some countries – or on the very rare occasion here in New Zealand – women are not coerced into carrying a baby for another.

Being a surrogate is not an easy journey, and the decision to do it should never be taken lightly. However, that does not mean that the practice is inherently exploitative. What’s paramount is to start from a place of free choice and a willingness to work with others – whether that be fertility doctors, counsellors, intending parents or  surrogacy support groups – to create a plan that everyone involved is happy with.

Ultimately, looking at New Zealand surrogacy through the lens of The Handmaid’s Tale only highlights the fundamental reasons that it’s a positive thing.

This content is entirely funded by Flick, New Zealand’s fairest power deal. On average, their customers save $350 each year, with no tricks or traps. Support the Spinoff by switching to Flick now!